Question 3.
Match the following and choose the correct answer by using codes given below:

Question 7.
Match the following and choose the answer by using codes given below:

Question 16.
Soil pollution is another form of pollution.
(a) Land
(b) Fertilizer
(c) Chemical
(d) Medicinal
Answer:
(a) Land

Question 23.
Define “Marginal propensity to consume”.
Answer:
Marginal Propensity to Consume is the additional consumption due to an additional unit of income.

Question 25.
What is Stagflation?
Answer:
Stagflation is a combination of stagnant economic growth, high unemployment and high inflation.

Question 27.
Define RBI Rural credit.
Answer:
Reserve Bank of India and Rural Credit: In a developing economy like India, the Central bank of the country cannot confine itself to the monetary regulation only, and it is expected that it should take part in development function in all sectors especially in the agriculture and industry.

Question 28.
What is Free trade area?
Answer:
A free trade area is the region encompassing a trade bloc whose member countries have signed a free-trade agreement (FTA). Such agreements involve cooperation between at least two countries to reduce trade barriers, e.g. SAFTA, EFTA.

Question 30.
Mention the countries where per capita carbon dioxide emission is the highest in the world.
Answer:

Question 32.
Write a short note on per capita income.
Answer:
Per Capita Income 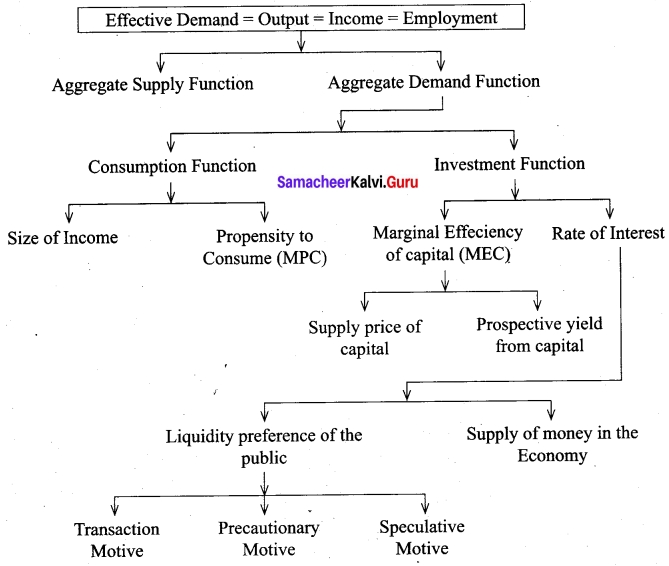 Question 36.
What are the ARDC – objectives?
Answer:
Objectives of the ARDO

Question 41 (a).
Briefly explain the two sector circular flow model.
Answer:
Circular Flow of Income in a Two-Sector Economy:
There are only two sectors namely, household sector and firm sector.
(i) Household Sector:

Personal Income:
Personal income is the total income received by the individuals of a country from all sources before payment of direct taxes in a year. 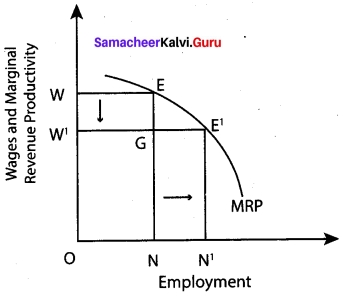 (b) Explain the differences between classical theory and Keynes theory.
Answer: 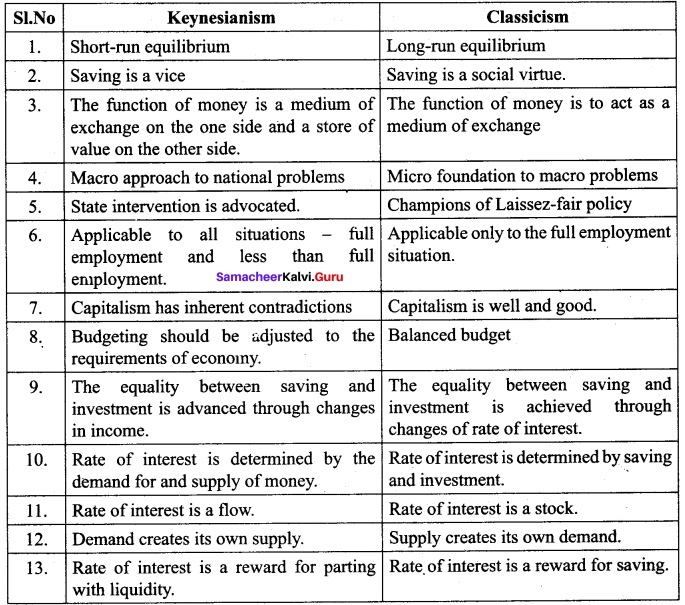 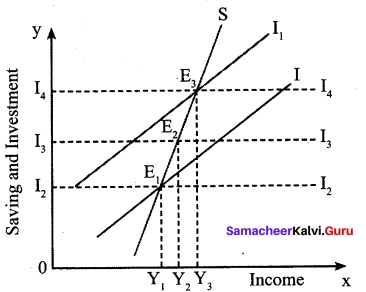 (b) Briefly explain the Leakages of Multiplier.
Answer:
Leakages of multiplier:

Payment towards past debts:
If a portion of the additional income is used for repayment of old loan, the MPC is reduced and as a result the value of multiplier is cut.

Import of goods and services:

Question 44 (a).
Illustrate Fisher’s Quantity theory of money.
Answer:
Fisher’s Quantity Theory of Money: The quantity theory of money is a very old theory. It was first propounded in 1588 by an Italian economist, Davanzatti. But, the credit for popularizing this theory in recent years rightly belongs to the well-known American economist, Irving Fisher who published his book, ‘The Purchasing Power of Money” in 1911. He gave it a quantitative form in terms of his famous “Equation of Exchange”.
The general form of equation given by Fisher is
MV = PT

1. Fisher points out that in a country during any given period of time, the total quantity of money (MV) will be equal to the total value of all goods and services bought and sold (PT).
MV = PT
Supply of Money = Demand for Money.

5. The above equation considers only currency money. But, in a modem economy, bank’s demand deposits or credit money and its velocity play a vital part in business. Therefore, Fisher extended his original equation of exchange to include bank deposits Mj and its velocity Vr The revised equation was:
PT = MV + M1V1
P = \(\frac{MV + M1V1}{T}\)

(b) Explain the Measures of control inflation.
Answer:
Measures to Control Inflation:
Keynes and Milton Friedman together suggested three measures to prevent and control of inflation.

1. Monetary Measures:
These measures are adopted by the Central Bank of the country. They are

3. Other Measures:
These measures can be divided broadly into short-term and long-term measures.
(a) Short-term measures can be in regard to public distribution of scarce essential commodities through fair price shops (Rationing). In India whenever shortage of basic goods has been felt, the government has resorted to import so that inflation may not get triggered.

(b) Long-term measures will require accelerating economic growth especially of the wage goods which have a direct bearing on the general price and the cost of living. Some restrictions on present consumption may help in improving saving and investment which may be necessary for accelerating the rate of economic growth in the long run.

The following are the objectives of the World Bank:

(b) Specify the meaning of material balance principle.
Answer:
The relationship between the economy and the environment is generally explained in the form of a “Material Balance Model” developed by AlenKneese and R.V. Ayres.
The model considers the total economic process as a physically balanced flow between inputs and outputs.
Inputs are bestowed with physical property of energy which is received from the environment. 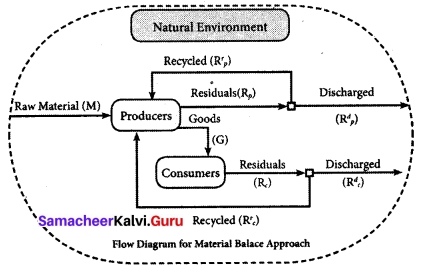 The interdependence of economics and environment.
The first law of thermodynamics, i.e. the law of conservation of matter and energy, emphasizes that in any production system “what goes in must come out”. This is known as the Material Balance Approach or Material Balance Principle.

Moreover, all resources extracted from the environment eventually become unwanted wastes and pollutants. Production of output by firms from inputs resulting in discharge of solid, liquid and gaseous wastes. Similarly, waste results from consumption activities by households. In its simple form the Material Balance Approach can be put in form equation.

Question 47 (a).
Elucidate major causes of vicious circle of poverty with diagram.
Answer: 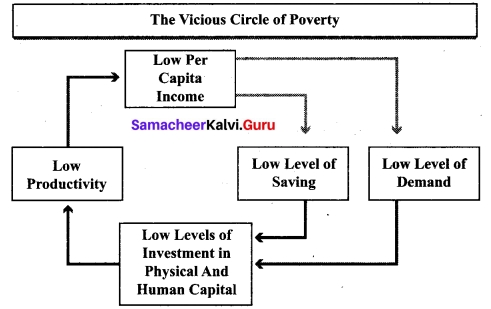 (b) State and explain the different kinds of Correlation.
Answer:
Type I: Based on the direction of change of variables 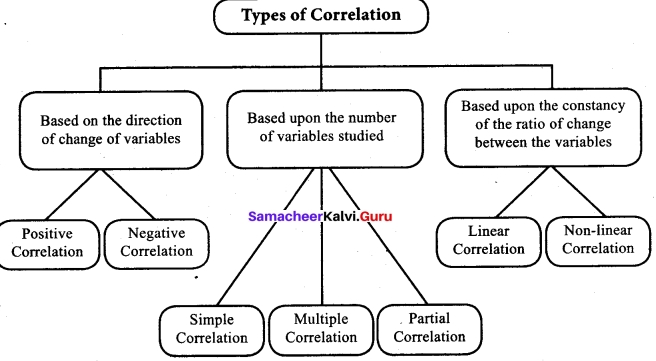 Simple Correlation: If only two variables are taken for study then it is said to be simple correlation. Ex. Y = a + bx