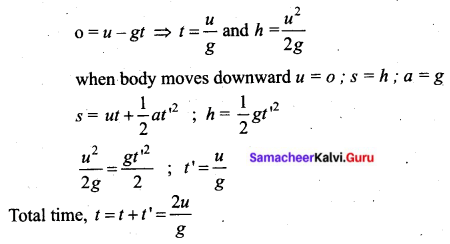 Question 4.
Force acting on a particle moving at constant speed:
(a) always zero
(b) need not be zero
(c) always non-zero
(d) cannot be concluded
Answer:
(a) always zero

Question 10.
If two wires have the same dimension but of different materials, the graph between load and extension is as follow, then which of the following is true:

Question 17.
What is the difference between scalar and vector? Give examples.
Answer:

Question 24.
A particle executing SHM covers a displacement of half of the amplitude in one second. Calculate its time period.
Answer:
Displacement, X = A sin(ωt) 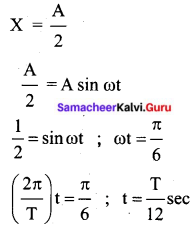 Question 27.
Give the difference between elastic and inelastic collision.
Answer:

Question 30.
Explain any three factors affecting the surface tension of a liquid.
Answer:

Question 31.
Define degrees of freedom. Give an example.
Answer:
The minimum number of independent coordinates needed to specify the position and configuration of a thermo-dynamical system in space is called the degree of freedom of the So its degree of freedom is one.
Example:

Question 32.
Explain any three applications of reflection of a sound wave.
Answer:
(a) Stethoscope: It works on the principle of multiple reflections. It consists of three main parts:

(b) Echo: An echo is a repetition of sound produced by the reflection of sound waves from a wall, mountain or other obstructing surfaces. The speed of sound in air at 20°C is 344 ms-1. If we shout at a wall which is at 344 m away, then the sound will take 1 second to reach the wall. After reflection, the sound will take one more second to reach us. Therefore, we hear the echo after two seconds.

(c) SONAR: Sound Navigation and Ranging. Sonar systems make use of reflections of sound waves in the water to locate the position or motion of an object. Similarly, dolphins and bats use the sonar principle to find their way in the darkness.

Question 33.
A child is playing on a sliding board. If he is sliding down:
(a) Mention the forces acting on the child.
(b) Draw FBD (Free Body Diagram).
(c) Write the force equation.
Answer:
(a) ma = mg sin θ – fk 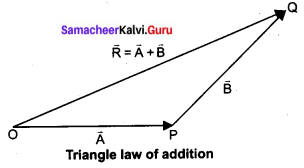 1. Magnitude of resultant vector: The magnitude and angle of the resultant vector are determined by using triangle law of vectors as follows.
From the figure, consider the triangle ABN, which is obtained by extending the side OA to ON. ABN is a right-angled triangle.

(iv) Forced oscillations: Any oscillator driven by an external periodic agency to overcome the damping is known as a forced oscillator or driven oscillator. In this type of vibration, the body executing vibration initially vibrates with its natural frequency and due to the presence of external periodic force, the body later vibrates with the frequency of the applied periodic force. Such vibrations are known as forced vibrations.
Example: Soundboards of stringed instruments.

Question 35.
(a) Explain the vertical motion of blocks connected by a string.
Answer:
Vertical motion: Consider two blocks of masses m1 and m2 (m1 > m2) connected by light and inextensible string that passes over a pulley as shown in Figure. 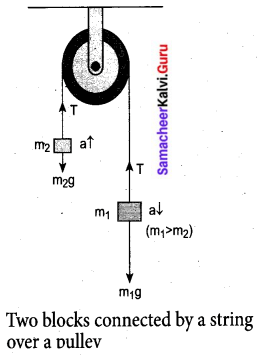 Let the tension in the string be T and acceleration a.
When the system is released, both the blocks start moving, m2 vertically upward and m1 downward with same acceleration a. The gravitational force m1g on mass m1 is used in lifting the mass m2.
The upward direction is chosen as y-direction. The free-body diagrams of both masses are shown in Figure. 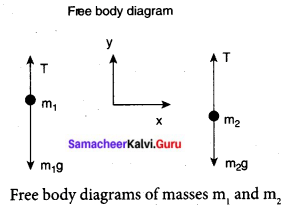 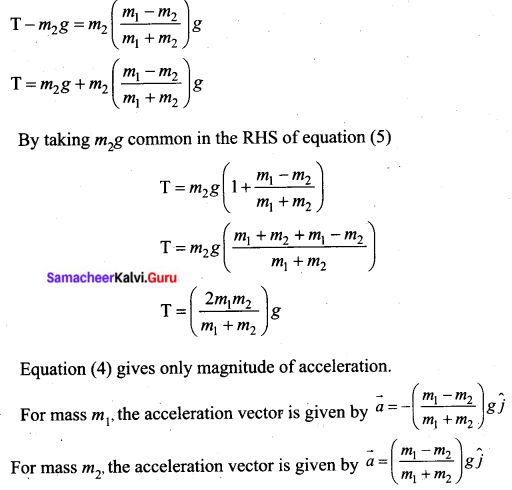 Question 36(a).
Derive the expression of a moment of inertia of the rod about an axis passing through its centre and perpendicular to the rod.
Answer:
Let us consider a uniform rod of mass (M) and length (l) as shown in the figure. Let us find an expression for moment of inertia of this rod about an axis that passes through the centre of mass and perpendicular to the rod. First, an origin is to be fixed for the coordinate system so that it coincides with the centre of mass, which is also the geometric centre of the rod. The rod is now along the x-axis. We take an infinitesimally small mass (dm) at a distance (x) from the origin. The moment of inertia (dl) of this mass (dm) about the axis is, dl = (dm)x2
As the mass is uniformly distributed, the mass per unit length (λ) of the rod is, \(\lambda=\frac{\mathbf{M}}{l}\)
The (dm) mass of the infinitesimally small length as, dm = λdx = \(\frac{M}{l}\) dx
The moment of inertia (i) of the entire rod can be found by integrating dI,
\(\begin{aligned}
&\mathrm{I}=\int d \mathrm{I}=\int(d m) x^{2}=\int\left(\frac{\mathrm{M}}{l} d x\right) x^{2}\\
&\mathrm{I}=\frac{\mathrm{M}}{l} \int x^{2} d x
\end{aligned}\)
As the mass is distributed on either side of the origin, the limits for integration are taken from to -l/2 to l/2 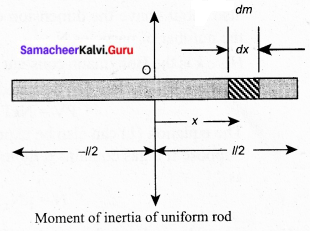 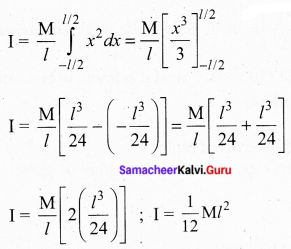 [OR]
Question 36(b).
State ideal gas laws. Derive the equation of state for an ideal gas.
Answer:
Boyle’s law: For a given gas at low pressure (density) kept in a container of volume V, experiments revealed the following information.
When the gas is kept at a constant temperature, the pressure of the gas is inversely proportional to the volume P ∝ \(\frac{1}{V}\)
Charles’ law: When the gas is kept at constant pressure, the volume of the gas is directly proportional to absolute temperature V ∝ T.
By combining these two equations we have
PV = CT. Here C is a positive constant.
We can infer that C is proportional to the number of particles in the gas container by considering the following argument. If we take two containers of the same type of gas with the same volume V, same pressure P and same temperature T, then the gas in each container obeys the above equation. PV = CT. If the two containers of gas are considered as a single system, then the pressure and temperature of this combined system will be same but volume will be twice and a number of particles will also be double.

For this combined system, V becomes 2V, so C should also double to match with the ideal gas equation \(\frac{P(2 V)}{T}=2 C\). It implies that C must depend on the number of particles in the gas and also should have the dimension of \(\left[\frac{\mathrm{PV}}{\mathrm{T}}\right]=\mathrm{JK}^{-1}\). So we can write the constant C as k times the number of particles N.
Here k is the Boltzmann constant (1.381 × 10-23 JK-1) and it is found to be a universal constant. So the ideal gas law can be stated as follows
PV = NkT ……..(1)
The equation (1) can also be expressed in terms of mole.
Suppose if the gas contains µ mole of particles then the total number of particles can be written as N = µNA …(2)
where NA is Avogadro number (6.023 × 1023 mol-1)
Substituting for N from equation (2), the equation (1) becomes PV = µNAkT. Here NAk = R called universal gas constant and its value is 8.314 J /mol. K
So the ideal gas law can be written for µ mole of gas as
PV = µRT ……..(3)
This is called the equation of state for an ideal gas. It relates the pressure, volume and temperature of the thermodynamic system at equilibrium. 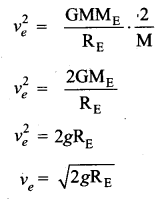 From equation (4) the escape speed depends on two factors acceleration due to gravity and radius of the Earth. It is completely independent of the mass of the object. By substituting the values of g (9.8 ms-2) and R, = 6400 km, the escape speed of the Earth is vg = 11.2 kms-1. The escape speed is independent of the direction in which the object is thrown. Irrespective of whether the object is thrown vertically up, radially outwards or tangentially it requires the same initial speed to escape Earth’s gravity.
[OR]
Question 37(b).
Explain the different types of moduli of elasticity.
Answer:
From Hooke’s law, the stress in a body is proportional to the corresponding strain, provided the deformation is very small. Here we shall define the elastic modulus of a given material. There are three types of elastic modulus.
(a) Young’s modulus (b) Rigidity modulus (or Shear modulus) (c) Bulk modulus
Young’s Modulus: When a wire is stretched or compressed, then the ratio between tensile stress (or compressive stress) and tensile strain (or compressive strain) is defined as Young’s modules. 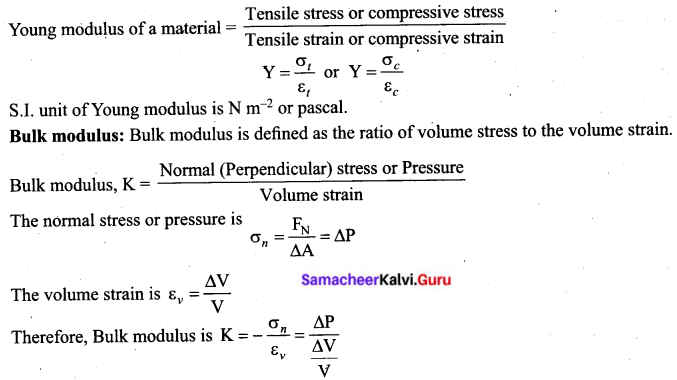 The negative sign indicates when pressure is applied on the body, its volume decreases. Further, the equation implies that a material can be easily compressed if it has a small value of bulk modulus. In other words, bulk modulus measures the resistance of solids to change in their volume. For example, we know that gases can be easily compressed than solids, which means, gas has a small value of bulk modulus compared to solids. The S.I. unit of K is the same as that of pressure i.e., Nm-2 or Pa (pascal).
The rigidity modulus or shear modulus: The rigidity modulus is defined as the ratio of the shearing stress to shearing strain, 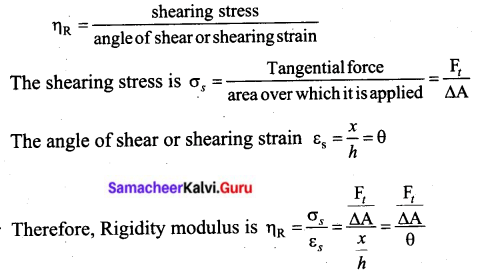 Further, the above implies, that a material can be easily twisted if it has a small value of rigidity modulus. For example, consider a wire, when it is twisted through an angle 0, a restoring torque is developed, that is
τ ∝ θ
This means that for a larger torque, the wire will twist by a larger amount (angle of shear θ is large). Since rigidity modulus is inversely proportional to the angle of shear, the modulus of rigidity is small. The S.I. unit of ηR is the same as that of pressure i.e., Nm-2 or pascal. 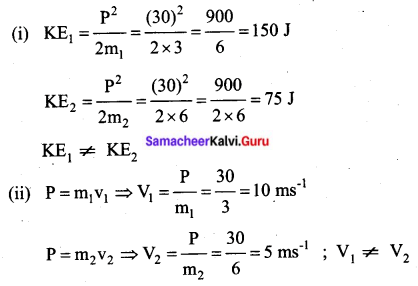 [OR]
Question 38(b).
In a series of successive measurements in an experiment, the readings of a period of rotation of a wheel were found out to be 2.15s, 2.25s, 2.28s and 2.32s. Calculate:
(i) mean value of the period of rotation
(ii) absolute error in each measurement
(iii) mean absolute error
(iv) relative error and
(v) percentage error. Express the result in proper form.
Answer: 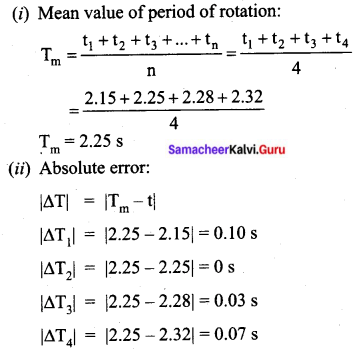 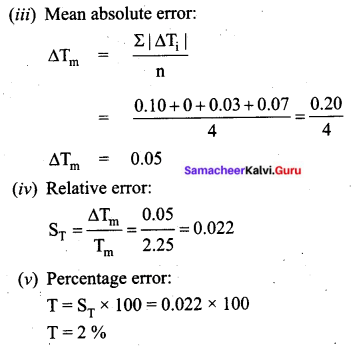