Answer all the questions. [15 x 1 = 15]
Choose the most suitable answer from the given four alternatives.

Question 9.
Which of the following concentration terms is/are independent of temperature?
(a) molality
(b) molarity
(c) mole fraction
(d) (a) and (c)
Answer:
(d) (a) and (c)

Solution:
Molality and mole fraction are independent of temperature.

Question 11.
The IUPAC name of the compound is

Question 16.
What is meant by plasma state? Give an example.
Answer:
The gaseous state of matter at very high temperature containing gaseous ions and free-electron is referred to as the Plasma state, e.g. Lightning.

Question 18.
Do you think that heavy water can be used for drinking purposes?
Answer:

Question 19.
Mention the methods used for liquefaction of gases.
Answer:

Question 21.
What is reaction quotient?
Answer:
Consider a.homogeneous reversible reaction
For the above reaction under non-equilibrium conditions, reaction quotient Q is defined as the ratio of the product of active masses of reaction products raised to the respective stoichiometric coefficients in the balanced chemical equation to that of the reactants.

Question 22.
Write the structural formula for the following compounds,
(a) Cyclohexa-1,4-diene
(b) Ethynyl Cyclohexane
Answer:

Question 24.
Complete the reaction and mention name of the reaction.
CH3CH2Br + (CH3)2 LiCu → ?
Answer:
This reaction is known as Corey-House Mechanism.

Question 27.
What are the importance of hydrogen bonding in proteins?
Answer:

Question 28.
What is the reason behind the cause of ear pain while climbing a mountain? How it can be rectified?
Answer:

Question 29.
A mixture of gases contains 4.76 mole of Ne, 0.74 mole of Ar and 2.5 mole of Xe. Calculate the partial pressure of gases, if the total pressure is 2 atm, at a fixed temperature.
Answer: 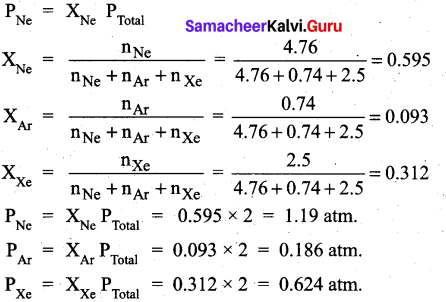 Question 33.
What are particulate pollutants? Explain any three.
Answer:

Question 34.
(a) (i) The stabilization of a half-filled d-orbital is more pronounced than that of the p-orbital. Why? (3)
(ii) What are degenerate orbitals? (2)
[OR]
(b) (i) Explain the preparation of hydrogen using electrolysis. (3)
(ii) Why hydrogen gas is used as fuel? (2)
Answer:
(a) (i) The exactly half-filled orbitals have greater stability. The reason for their stability are.
1. symmetry
2. exchange energy.

(b) (i) High purity of hydrogen (>99.9%) is obtained by the electrolysis of water containing traces of acid or alkali or electrolysis of aqueous solution of sodium hydroxide or potassium hydroxide using a nickel anode and iron cathode. This process is not economical for large scale production.

Question 35.
(a) (i) What is lattice energy? (2)
(ii) Write down the Born-Haber cycle for the formation of CaCl2. (3)
[OR]
(b) (i) What is the effect of added inert gas on the reaction at equilibrium? (2)
(ii) Explain the equilibrium constants for heterogeneous equilibrium. (3)
Answer:
(a) (i) Lattice energy is defined as the amount of energy required to completely separate one mole of a solid ionic compound into gaseous constituent.
(ii) Born-Haber cycle for the formation of CaCl2. 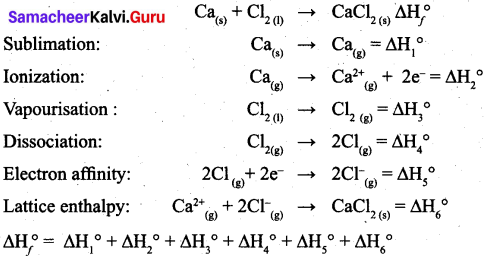 (b) (i) When an inert gas (i.e., a gas which does not react with any other species involved in equilibrium) is added to an equilibrium system at constant volume, the total number of moles of gases present in the container increases, that is, the total pressure of gases increases, the partial pressure of the reactants and the products are unchanged. Hence at constant volume, the addition of inert gas has no effect on the equilibrium.
(ii) Equilibrium constants for heterogeneous equilibrium:
Consider the following heterogeneous equilibrium.

The equilibrium constant for the above reaction can be written as

A pure solid always has the same concentration at a given temperature, as it does not expand to fill its container, i.e. it has same number of moles L-l of its volume. Therefore, the concentration of a pure solid is constant. The above expression can be modified as follows.

Question 36.
(a) (i) Explain why the aquatic species are more comfortable in cold water during winter season rather than warm water during the summer? (3)
(ii) What is osmosis? (2) 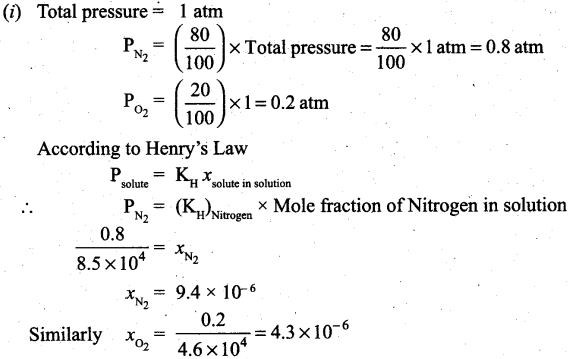 Question 37.
(a) (i) How inductive effect helps to explain reactivity and acidity of carboxylic acids? (3)
(ii) HCOOH is more acidic than CH3COOH. Why? (2)
[OR]
(b) (i) Suggest a simple chemical test to distinguish propane and propene. (2)
(ii) Write a notes on Wurtz-fitting reaction. (3)
Answer:
(a) (i) Reactivity of carboxylic acid:

Out of Acetic acid and Formic acid, Formic acid is conidered stronger because, CH3 group in Acetic acid contriubutes electron density towards the O – H bond, making it harder to remove the H+ ion and making Acetic acid a weaker acid that Formic acid.

(ii) When a solution of bromobenzene and iodomethane in dry ether is treated with metallic sodium, toluene is formed.

Question 38.
(a) An organic compound (A) with molecular formula C2H5Cl reacts with KOH gives compound B and with alcoholic KOH gives compound C. Identify A, B and C explain the reactions. (5)
(b) Write an essay on water pollution. (5)
Answer:

III – Quality of drinking water:
Now a days most of us hesitate to use natural water directly for drinking because biological, physical or chemical impurities from different sources mix with surface water or ground water.