Answer all the Questions. [15 x 1 = 1]
Choose the most suitable answer from the given four alternatives.

Question 1.
Match the List-I with List-Il using the correct code given below the list.

Question 16.
Explain about the factors that affect electronegativity?
Answer:

Question 17.
How do you convert para-hydrogen into ortho-hydrogen?
Answer:
Para hydrogen can be converted into ortho hydrogen by the following ways:

Question 21.
In CH4, NH3 and H20 the central atom undergoes sp3 hybridization – yet their bond angles are different. Why?
Answer:

Question 22.
Identify the compound in the following reaction,

Question 25.
Explain how effective nuclear charge is related with stability of the orbital?
Answer:

Question 26.
Write a notes on hydrogen sponge.
Answer:
(i) Hydrogen sponge (or) Metal hydride e.g., palladium-hydrogen system is a binary hydride (Pdll).
(ii) Upon heating, H atoms diffuse through the metal to the surface and recombine to form molecular hydrogen. Since no other gas behaves this way with palladium, this process has been used to separate hydrogen gas from other gases:
\(2 \mathrm{Pd}_{(\mathrm{s})}+\mathrm{H}_{2(\mathrm{g})} \rightleftharpoons 2 \mathrm{PdH}_{(\mathrm{s})}\)
(iii) The hydrogen molecule readily adsorb on the palladium surface, where it dissociates into atomic hydrogen. The dissociated atoms, dissolve into the interstices or voids (octahedral or tetrahedral) of the crystal lattice. 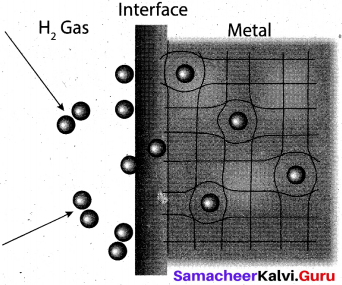 (iv) Technically, the formation of metal hydride is by chemical reaction but it behaves like a physical storage method, i. e., it is absorbed and released like a water sponge. Such a reversible uptake of hydrogen in metals and alloys is also attractive for hydrogen storage and for rechargeable metal hydride battery applications.

Question 27.
In what way lithium differs from other metals of the same group?
Answer:

Question 29.
Write the important principles of VSEPR theory to predict the shape of molecules.
Answer:

Answer:
In l-butyne, terminal carbon atom contains atom one acidic hydrogen, therefore it will react with silver nitrate in the presence of ammonium hydroxide to give silver butynide. Whereas 2-butyne does not undergo such type of the reaction, because of the absence of acidic hydrogen.

Step II. Calculation of wavelength of the electron According to de Broglie’s equation,

Question 35.
(a) (i) Explain the exchange reactions of deuterium, (2)
(ii) Explain the action of soap with hard water. (3)
[OR]
(b) (i) Derive ideal gas equation. (3)
(ii) CO2 gas cannot be liquified at room temperature. Give the reason. (2)
Answer:
(a) (i) Deuterium can replace reversibly hydrogen in compounds either partially or completely depending upon the reaction conditions. These reactions occur in the presence of deuterium.

(b) (i) Ideal gas equation:
The gaseous state is described completely using the following four variables T, P, V and n. Each gas law relates one variable of a gaseous sample to another while the other two variables are held constant.

Therefore, combining all equations into a single equation will enable to account for the change in any or all of the variables.

We can combine these equations into the following general equation that describes the physical behaviour of all gases.
\(\mathrm{V} \propto \frac{\mathrm{nT}}{\mathrm{P}}\)

The above equation can be rearranged to give PV = nRT – Ideal gas equation.

Question 36.
(a) (i) Why deep-sea divers use air diluted with helium gas in their air tanks? (3)
(ii) What is molal depression constant? Does it depend on nature of the solute. (2)

(b) (i) Write the resonance structures for ozone molecule and N20? (2)
(ii) Draw MO diagram of CO and calculate its bond order. (3)
Answer:
(a) (i) 1. Deep-sea divers carry a compressed air tank for breathing at high pressure under water. This air tank contains nitrogen and oxygen which are not very soluble in blood and other body fluids at normal pressure.
2. As the pressure at the depth is far greater than the surface atmospheric pressure, more nitrogen dissolves in the blood when the diver breathes from tank.
3. When the divers ascends to the surface, the pressure decreases, the dissolved nitrogen comes out of the blood quickly forming bubbles in the blood stream. These bubbles restrict blood flow, affect the transmission of nerve impulses and can even burst the capillaries or block them. This condition is called “the bends” which are painful and dangerous to life.
4. To avoid such dangerous condition they use air diluted with helium gas (11.7 % helium, 56.2% nitrogen and 32.1% oxygen) of lower solubility of helium in the blood than nitrogen.

i. e., cryoscopic constant is equal to the depression in freezing point for 1 molal solution cryoscopic constant depends on the molar concentration of the solute particles. Kf is directly proportional to the molal concentration of the solute particles.
\(\Delta \mathrm{T}_{f}=\mathrm{K}_{f} \times \frac{\mathrm{W}_{\mathrm{B}} \times 1000}{\mathrm{M}_{\mathrm{B}} \times \mathrm{W}_{\mathrm{A}}}\) 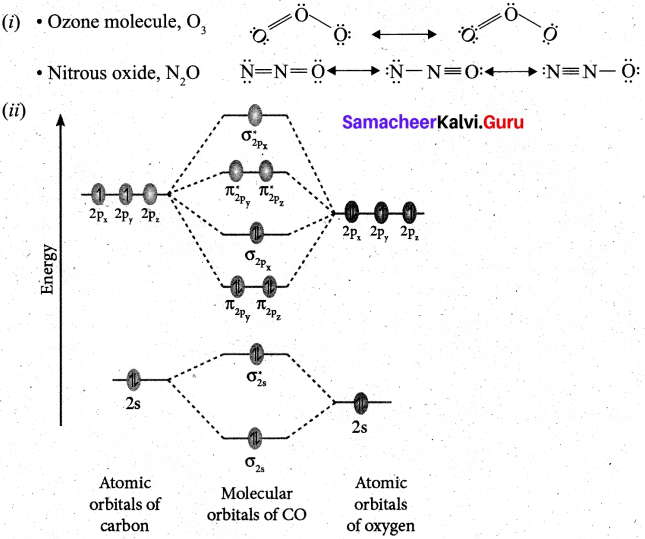 Question 37.
(a) (i) What are cis-trans isomerism? Explain with example.
(ii) Give the IUPAC names of the following compounds,

(b) (i) What is enzymatic browning?
(ii) How will you convert nitrile into primary amine?
Answer:
(a) (i)

(b) (i) 1. Apples contains an enzyme called polyphenol oxidase (PPO) also known as tyrosinase.
2. Cutting an apple exposes its cells to the atmospheric oxygen and oxidizes the phenolic compounds present in apples. This is called the “enzymatic browning” that turns a cut apple brown.
3. In addition to apples, enzymatic browning is also evident in bananas, pears, avocados and even potatoes. 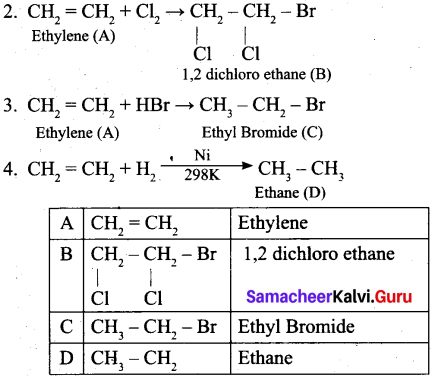 (ii) Eutrophication: When the growth of algae increases in the surface of water, dissolved oxygen in water is greatly reduced. This phenomenon is known as eutrophication. Due to this growth of fishes gets inhibited.