Question 7.
Identify the wrong statement(s).
(i) Molybdenum is a micronutrient.
(ii) Carbon, Hydrogen, Nitrogen are skeletal elements.
(iii) Manganese is the activator for RUBP carboxylase.
(iv) Potassium maintains osmotic potential of the cell.
(a) (i) and (iv)
(b) (ii) and (iii)
(c) Only (if)
(d) Only (iv)
Answer:
(b) (ii) and (iii)

Question 11.
What are root stocks? What are its function?
Answer:
Perennial and some biennial herbs have underground stems, which are generally known as root stocks. Root stock functions as a storage and protective organ.

Question 12.
Define Cladogram.
Answer:
The outcome of a cladistic analysis is a cladogram, a tree-shaped diagram that represent the best hypothesis of phylogenetic relationships.

Question 13.
Mention the drawbacks of diffusion.
Answer:
In diffusion, there is a lack of control over the transport of selective molecules. There is a possibility of harmful substances entering the cell by a concentration gradient.

Question 14.
What is Phytol tail? Mention its role.
Answer:
a. Phytol tail is the lipophilic tail of chlorophyll molecule.
b. It helps in anchoring the chlorophyll to lamellae.

Question 16.
What is the importance of inflorescence.
Answer:
Function of inflorescence is to display the flowers for effective pollination and facilitate seed dispersal. The grouping of flowers in one place gives a better attraction to the visiting pollinators and maximize the energy of the plant.

Question 17.
Write a brief note on Manganese toxicity.
Answer:
Increased Concentration of Manganese will prevent the uptake of Fe and Mg, prevent translocation of Ca to the shoot apex and cause their deficiency. The symptoms of manganese toxicity are appearance of brown spots surrounded by chlorotic veins. 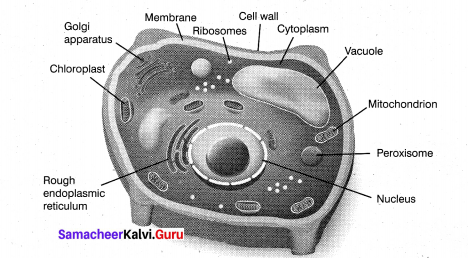 Question 19.
Mention the role of ethylene in agriculture field.
Answer:

Question 20.
Explain the various phases in Cell Cycle.
Answer:
The different phases of cell cycle are as follows:
Interphase: Longest part of the cell cycle, but it is of extremely variable length. At first glance the nucleus appears to be resting but this is not the case at all. The chromosomes previously visible as thread like structure, have dispersed. Now they are actively involved in protein synthesis, at least for most of the interphase.
C-Value is the amount in picograms of DNA contained within a haploid nucleus.

G1 Phase: The first gap phase – 2C amount of DNA in cells of G1 The cells become metabolically active and grows by producing proteins, lipids, carbohydrates and cell organelles including mitochondria and endoplasmic reticulum. Many checkpoints control the cell cycle. The checkpoint called the restriction point at the end of G1 it determines a cells fate whether it will continue in the cell cycle and divide or enter a stage called G0 as a quiescent stage and probably as specified cell or die. Cells are arrested in G1 due to:

Biochemicals inside cells activates the cell division. The proteins called kinases and cyclins activate genes and their proteins to perform cell division. Cyclins act as major checkpoint which operates in G0 to determine whether or not a cell divides.

G0 Phase: Some cells exit G1 and enters a quiescent stage called G0 , where the cells remain metabolically active without proliferation. Cells can exist for long periods in G0 phase. In G0 cells cease growth with reduced rate of RNA and protein synthesis. The G0 phase is not permanent. Mature neuron and skeletal muscle cell remain permanently in G0. Many cells in animals remains in G0 unless called on to proliferate by appropriate growth factors or other extracellular signals. G0 cells are not dormant.

S phase – Synthesis phase – cells with intermediate amounts of DNA.
Growth of the cell continues as replication of DNA occur, protein molecules called histones are synthesised and attached to the DNA. The centrioles duplicate in the cytoplasm. DNA content increases from 2C to 4C.

One of the proteins synthesized only in the G2 period is known as Maturation Promoting Factor (MPF). It brings about condensation of interphase chromosomes into the mitotic form. 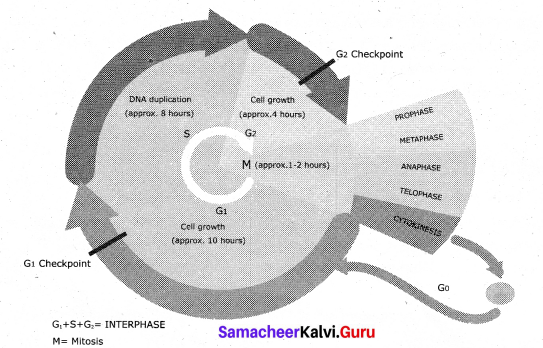 a. Haplontic life cycle:
Gametophytic phase is dominant, photosynthetic and independent, whereas sporophytic phase is represented by the zygote. Zygote undergoes meiosis to restore haploid condition. Example: Volvox and Spirogyra.

b. Diplontic life cycle:
Sporophytic phase (2n) is dominant, photosynthetic and independent. The gametophytic phase is represented by the single to few celled gametophyte. The gametes fuse to form zygote which develops into sporophyte. e.g., Fucus, gymnosperms and angiosperms.

c. Haplodiplontic life cycle:
This type of life cycle is found in Bryophytes and pteridophytes which is intermediate between haplontic and diplontic type. Both the phases are multicellular, but they differ in their dominant phase. In Bryophytes dominant independent phase is gametophyte and it alternates with short-lived multicellular sporophyte totally or partially dependent on the gametophyte.

Life cycle patterns in plants (a) Haplontic, (b) Diplontic, (c) Haplo-diplontic
In Pteridophytes sporophyte is the independent phase. It alternates with multicellular saprophytic or autotrophic, independent, short lived gametophyte (n).

According to this theory, the enzyme dehydrogenase on inner surface is responsible for the fonnation of protons (H+) and electrons (e– ). As electrons pass outward through electron transport chain there is a corresponding inward passage of anions. Anions are picked up by oxidized cytochrome oxidase and are transferred to other members of chain as they transfer the electron to the next component.

The theory assumes that cations (C+) move passively along the electrical gradient created by the accumulation of anions (A–) at the inner surface of the membrane.

Main defects of the above theory are: 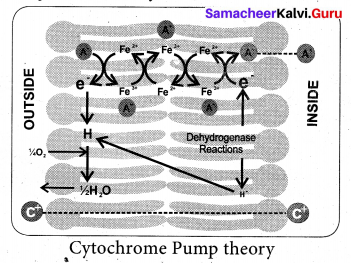 State the differences between photorespiration and dark respiration.
Answer:

Question 9.
What is radial symmetry?
Answer:
When any plane passing through the central axis of the body divides an organism into two identical parts, it is called radial symmetry, e.g., Cnidarian.

Question 10.
Why do you call cockroach a pest?
Answer:
Cockroach destroy food and contaminates it with their offensive odour. They are carriers of a number of bacterial diseases. The cockroach allergen can cause asthma to sensitive people.

Question 11.
Why do plants not require a digestive system?
Answer:
Plants are autotrophs. They prepare their own food using C02, H20 in the pressure of sunlight trapped by the chlorophyll pigment present in the leaves. There is no need of digestive system for plants as they use the starch as such. 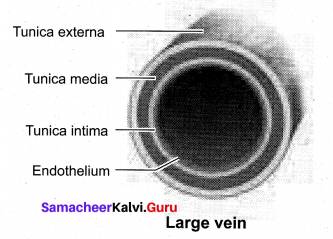 Question 13.
What are Nodes of Rannier?
Answer:
The Schwann cells covering the axen are not Continuous. There are gaps in the myelin sheath
between adjacent schwann cells. These gaps are called Nodes of Ranvier.

Question 15.
What is Vermicompost?
Answer:
Vermicompost is the compost produced by the action of earthworms in association with all other organisms in the compost unit.

Question 16.
What is the difference between a zoo and wild life sanctuary?
Answer:

Question 17.
What is lymph? Write its function.
Answer:
About 90% of fluid that leaks from capillaries eventually seeps back into the capillaries and the remaining 10% is collected and returned to blood system by means of a series of tubules known as lymph vessels or lymphatics. The fluid inside the lymphatics is called lymph.

The lymph nodes successfully prevent the invading microorganisms from reaching the blood stream. Cells found in the lymphatics are the lymphocytes. Lymphocytes collected in the lymphatic fluid are carried via the arterial blood and are recycled back to the lymph. Fats are absorbed through lymph in the lacteals present in the villi of the intestinal wall.

Question 18.
Draw the diagram of LS of the human eye and label the parts.
Answer: 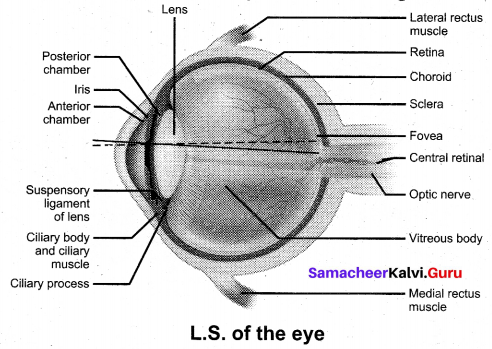 Question 19.
What are the main duties of a worker bee?
Each worker has to perform different types of work in her life time. During the first half of her life, she becomes a nurse bee attending to indoor duties such as secretion of royal jelly, prepares beebread to feed the larvae, feeds the queen, takes care of the queen and drones, secretes bees wax, builds combs, cleans and fans the bee hive. Then she becomes a soldier and guards the bee hive. In the second half her life lasting for three weeks, she searches and gathers the pollen, nectar, propolis and water. –

Question 20.
Draw the flowchart of classification of phylum chordata. 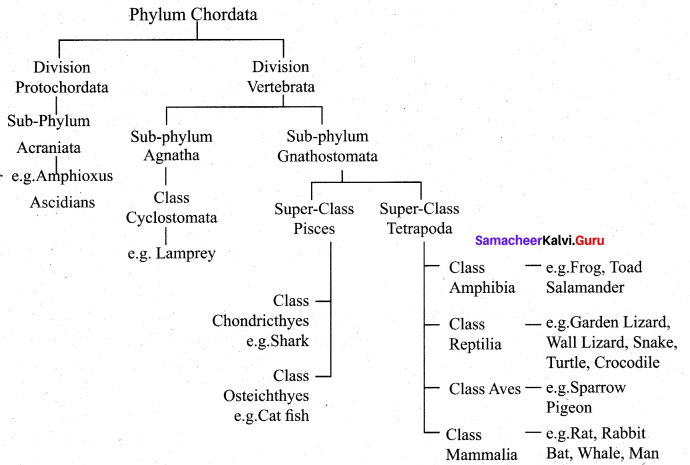 Describe the life cycle of Lampito mauritii.
Answer:
Lampito mauritii begins its life cycle, from the fertilized eggs. The eggs are held in a protective cocoon. These cocoons have an incubation period of about 14-18 days after which they hatch to release juveniles The juveniles undergo changes into non-clitellate forms in Phase -1 after about 15 days, which then cocoon develops a clitellum, called the clitellate at the end of the growth phase – II taking 15¬17 days to complete. During the reproductive stage, earthworms copulate, and later shed their cocoons in the soil after about 10 days.
The life cycle of Lampito mauritii takes about 60 days to complete. 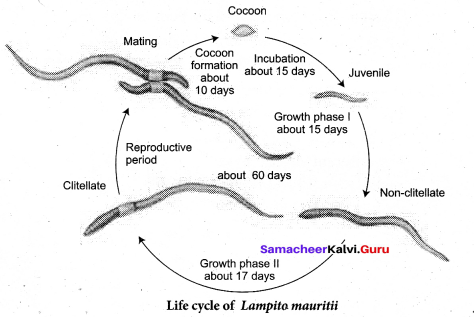 Question 21.
Explain the structure of Nephron.
Answer:
Each kidney has nearly one million complex tubular structures called nephron. Each nephron consists of a filtering corpuscle called renal corpuscle (malpighian body) and a renal tubule. The renal tubule opens into a longer tubule called the collecting duct. The renal tubule begins with a double walled cup shaped structure called the Bowman’s capsule, which encloses a ball of capillaries that delivers fluid to the tubules, called the glomerulus. The Bowman’s capsule and the glomerulus together constitute the renal corpuscle.

The endothelium of glomerulus has many pores (fenestrae). The external parietal layer of the Bowman’s capsule is made up of simple squamous epithelium and the visceral layer is made of epithelial cells called podocytes. The podocytes end in foot processes which cling to the basement membrane of the glomerulus. The openings between the foot processes are called filtration slits.

The collecting duct runs through the medullary pyramids in the region of the pelvis. Several collecting ducts fuse to form papillary duct that delivers urine into the calyces, which opens into the renal pelvis. 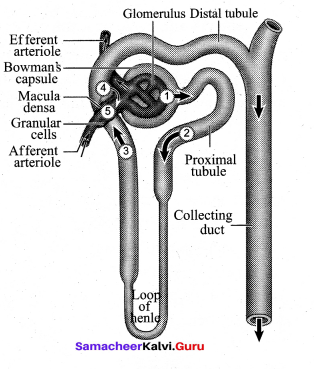 Explain the endoerenal function of gonads.
Answer:
Testis: A pair of testis is present in the scrotal sac of males. The testis functions as a sex organ and also as an endocrine gland. The testis is composed of seminiferous tubules and interstitial cells or Leydig cells. The Leydig cells secrete several male sex hormones, collectively called androgens, mainly testosterone.

Functions of testosterone: Under the influence of FSH and LH, testosterone initiates maturation of male reproductive organs, and the appearance of secondary sexual characters, muscular growth, growth of facial and axillary hair, masculine voice and male sexual behaviour. It enhances the total bone matrix and plays a stimulating role in the process of . spermatogenesis.

Ovary: Females have a pair of ovaries located in the pelvic region of the abdomen. The ovary is composed of ovarian follicles and stromal tissues.lt produces the eggs or ova. The ovaries secrete the steroid hormones oestrogen and progesterone. Oestrogen is responsible for the maturation of reproductive organs and the development of secondary sexual characters at puberty. Along with progesterone, oestrogens promotes breast development and initiate the cyclic changes during menstrual cycle.

Progesterone prepares the uterus for implantation of the fertilized ovum.lt decreases the uterine contraction during pregnancy and stimulates the development of mammary glands and milk secretion. It is responsible for premenstrual changes in the uteris and is essential for the formation of placenta.