A. Arrange the words in alphabetical order, find the meaning of the words from the dictionary and fill in the blanks.
( Ikebana Applique Origami Calligraphy Tapestry )

B. Match the tools with art forms.

C. Listen to the teacher reading the passage. Read the questions given below, then listen to passage again and complete the responses.

Speaking
D. Work in pairs. Find answers to these questions and present it to the class.

The Last Stone Carver Question 2.
Which session do you like – art / craft?
Answer:
I like the craft session.

The Last Stone Carver Summary Question 3.
What do you do in that session?
Answer:
We make a lot of new models.

The Last Stone Carver 7th Standard Question 4.
Do you work individually or in pairs?
Answer:
We work in pairs and groups.

The Last Stone Carver Book Back Answer Question 5.
Can you do an art work or a craft work on your own?
Answer:
I can do a craft on my down. I can do a model of a house.

The Last Stone Carver Lesson Question 6.
What qualities do you gain by doing art or craft?
Answer:

E. Construct meaningful sentences from the table given below

F. Read the news report given below and underline the passive form of verbs.

G. Rani’s teacher narrates to her students about the production of paper. Read the following narration and fill in the blanks with the verbs using their passive form.

People of China produced paper from wood. They mixed water with the fibres of wood and dried it, until they became a soft wet pulp. They used this pulp to make paper. The Chinese invented this method of paper making in 2nd century BCE. Later Egyptians used papyrus plants to make paper.

H. Read the process of making soup. Use suitable passive form of verbs and complete the paragraph. 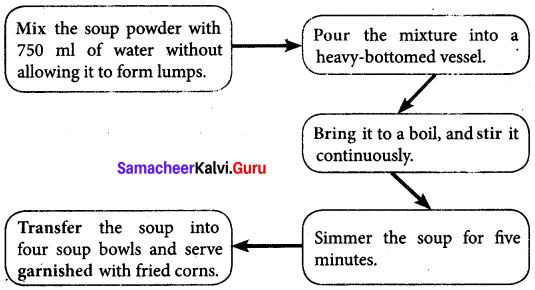 The packet is opened and the contents

Writing
I. If you are asked to choose from any one of these toys which one do you choose? Give reasons, (plastic toys, wooden toys, clay toys, metallic toys)
Answer:
I would choose wooden toys because they are much more special that the latest educational technology. Wooden toys bring a certain amount of nostalgia with them. It is also a durable material for toys. The more contact, we have With the plastic toys, the higher are the chances of health issues like asthma. So the wooden toys are better for safety and also good for the child’s brain. The quality and life span of wooden toys are much better than plastic toys and metallic toys.

J. Your friend has presented a beautiful art piece on your birthday. Write a letter to her appreciating her art work.
Answer:

I am extremely happy to write this letter to you, as I am very happy after receiving your present on my birthday. It is an excellent piece of art. The art piece called “Glow of Hope” is also referred to as the “Woman with the lamp”. It is a master piece from
S.L. Haldankar, produced in 1945-1946. Water colours are used deliberately. The effect of this painting is heightened with the shadow behind the subject. It is such a wonderful art by him. I thank you so much for this excellent art piece as a gift to me.

K. You have prepared some eco-friendly craft materials like paper mache dolls, greeting cards, book marks, festoons, garlands, quilling jewellery etc for an Art Mela to be conducted in you school premises. Describe in a few sentences how you made the craft work. Include the following details in your writing.

Answer:
We have made eco-friendly craft materials like paper mache dolls, greeting cards, book marks, festoons, garlands, quilling Jewellery for the Art Mela conducted in your school premises. The paper mache dolls were Russian Nesting Dolls. Paper – mache is a composite material consisting of paper pieces or pulp, reinforced with textiles and bound with glue. The beautiful hand made Birthday cards were excellent. They were made with cardboard, glue, colour pencils, glitter papers and some paper flowers. Festoons, garlands made out of crepe paper and quilling jewellery made out of quilled paper and flowers were excellent exhibits in the Mela. They were also sold to the students at affordable prices. They were safe to be used by everyone, as they are handy and eco-friendly.

I. Choose The correct Synonyms from the option below.

Question 3.
What was the name of his son?
Answer:
His son’s name was Gopal.

Question 5.
What did the old man have for his breakfast?
Answer:
The old man had a glass of milk for breakfast.

Question 7.
What did Salim want to become?
Answer:
He wanted to become a stone carver.

Question 1.
Why was Gopal indifferent to his father’s profession?
Answer:
Gopal was more practical than his father. Gopal believed that being traditional, sculptors wouldn’t pay them for a decent life. He believed that making candle- stands, paper-weights and ashtrays would bring them good revenue.

Question 2.
Why was the master sculptor not able to understand his son’s stance?
Answer:
The master mason loved his work and didn’t want to change it for any other work in the world. He told his son that it was the work he had learnt from his father and had kept up the traditions for hundreds of years.

Question 3.
How did the master mason’s love for his work ruin his life?
Answer:
The man worked continuously without taking any rest for many days. His one desire was to finish the sculpture, which would be his last. He worked till his hands began to tremble and his shoulders started to ache. His arms grew heavy and his eyes grew tired then he couldn’t see anymore.

Question 1.
What was wrong with masterjee?
Answer:
Masterjee, as he was known in his little village was a traditionalist. He was superstitious. He believed that Gods have entrusted the work of idol-making to his ancestors. So he, his sons and daughters should do the same work. For him, choosing another work – however profitable it was – was a sin. He was so much blind that he didn’t see the poverty that his family was suffering and had no commonsense to see that Gods would never want a group of people to starve and die.

Question 2.
Why did masterjee tell Salim that he was going to be the last stone-mason in his village?
Answer:
“Masterjee, Masterjee” Salim, the servant boy entered the workshop. His voice was filled with concern. He held a cup of tea in his hand. The old man lifted his head. He had a pale face and looked old and tired. He said, “Salim, soon I’ll be the last stone mason here, as everyone has gone to Agra. Look, Gopal my son has gone too. Now I’ll have to finish this sculpture all by myself. I can’t work with the chisel the way I used to do. But I have to finish the work and I will”.

A. Rewrite the sentences using the passive forms of the verbs underlined.

Question 1.
He took the book.
Answer:
The book was taken by him.

Question 2.
She is writing the exam.
Answer:
The exam is being written by her.

Question 3.
The children sang a song
Answer:
A song was sung by the children.

Question 5.
The carpenter will make a table for me.
Answer:
A table will be made by the Carpenter for me.

B. Fill in the blanks using the verbs in their passive form.

The young man flung the hammer and the chisel to the ground and cried “I’m leaving Father. I’m leaving you and this work. Look what it’s brought us!” He spread out his arms and glanced indifferently at the small congested workroom. The monsoons stained the white washed walls.
The hammer and chisel (i) ________ (flung) to the ground by the young man. He cried that he (ii) ________ (leave). His arms (iii) ________ (spread) out. The congested workroom (iv) ________ (glanced) indiferently by him. The white washed walls (v) ________ (stained) by monsoons.
Answer:

C. Fill in the blanks using the passive form of verbs.

Warm up
Work in pairs.

Read the instructions given below, draw and name the picture 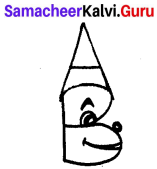 Write step by step instructions for the following picture. 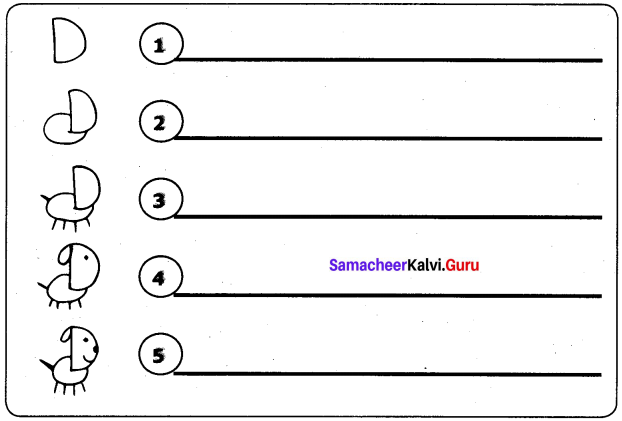 An old man was a traditional sculptor. He made a living by making statues for temples. He did this work because he believed in traditions. His father was a sculptor, too. But his son Gopal was different. He used to argue with his father about the stupidity of not changing his profession for good. One day, Gopal went off home for Agra to be a more successful man in life. The old man knew that his son’s decision was good but he was helpless. He loved his traditions and his sculptures. After his son’s departure, he continued his work. He had a servant by named Salim who was very dedicated to him. He came to work there five years ago.

Which of the two sentences given below convey the following meaning?

The old man struggled hard for a month to complete the statue of Radha and Krishna. His hands were weak and his mind was weak. He didn’t feel hunger and thirst. His chisel was striking the stone / again and again. He had a strong desire to complete his work. He prayed and cried. He wanted his son to help him. Finally, in the wake of the day, the old man fainted.

Read the sentences and number them in correct order.

Next day, when he opened his eyes, the old man saw someone completing the statue that! he had left unfinished. ‘Was it Gopal’, he thought. No, it was his servant boy, an orphan Salim. { Salim was sculpting Krishna’s statue in a wonderful way.

The old man watched everything with shock. The first wave of shock, fear and anger passed to give way to a feeling of great relief and happiness. Salim said that he had practised sculpting secretly for almost two years in the quarry. He wanted to become a sculptor like his master. He begged his master to teach him ‘Stone carving’. The old man told that there was nothing to teach him, as he already has it in his hands and heart. He has found his successor.