Samacheer Kalvi Guru 6th Social Science Question 1.
What was the step taken by the early man to collect his food?
(a) Trade
(b) Hunting
(c) Painting
(d) Rearing of animals
Answer:
(b) Hunting

II. Match the statement with the Reason, tick the appropriate answer:

Samacheer Kalvi 6th Social Science Book Back Answers Question 2.
Statement : The objects used by the early man are excavated. They are
preserved to know the lifestyle of the people.
Find out which of the following is related to the statement:
(a) Museum
(b) Burial materials
(c) Stone tools
(d) Bones
Answer:
(a) Museum

VI. Answer in one word :

6th Social Guide Question 1.
Can you say any two advantages of writing a diary?
Answer:

Samacheer Kalvi 6 Social Science Question 4.
What is proto history?
Answer:
Protohistory is the period between prehistory and history.

6th Samacheer Social Guide Question 2.
What do you know about the prehistoric period?
Answer:

Samacheer Kalvi Class 6 Social Science Solutions Question 5.
What are the benefits of a museum?
Answer:

Question 1.
How dogs were useful to pre-historic men?
Answer:

IX. Student Activity :
Question 1.
Identify the category of the following sources of history. 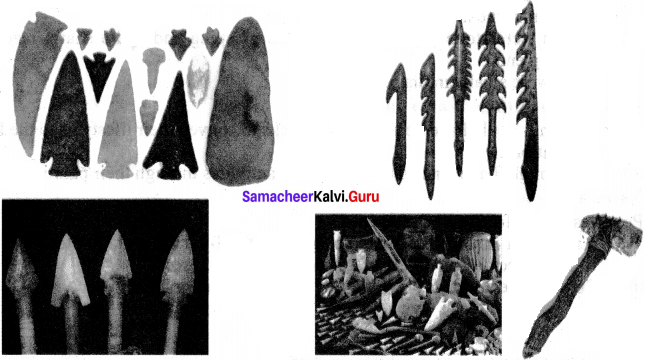 Question 2.
Discuss with your grandpa, grandma, neighbours and teachers and collect information about your street, village, town or school. With that collected data, try to write its history titling your Writing as “I am a Historian”.
Answer:
Am I am living at Mylapore. I have collected information about it from my grandparents, neighbours and teacher and internet. It is given below:
I am a Historian

(i) Mylapore is located a few kilometres to the south of the British-built Chennai city.

(ii) It lies between Tiruvallikkeni and Teynampet in the west then across to the coast in the east.

(iii) The word Mylapore is derived from Mayil Arparikum Oor, which means “Land

(iv) Historically, peacocks have been known to thrive in the area, which is evident from the several statues in the Kapaleeshwarar Temple towers and in the emblem of the San Thome Basilica.

(v) Thirugnanasambandar has also mentioned about mayil (peacock) in his songs in Tevaram.

(vii) As the available historical and archaeological evidence show, it could well be the oldest part of Chennai, with written records of early settlements going back to the first century BC.

(viii) It was known for its ancient port with a flourishing trade with the Roman Empire, receiving gold in exchange for its products like pepper and fine cloth.

(x) Ptolemy had recorded in the 2nd century AD that the port of Mylapore was known to the Greeks and the Romans. The Saivite Saints of the 7th Century, Saint Sambandar and Saint Appar, have sung about the Shrine in their hymns.

(xi) Mention has been made of the early settlement of Santhome (currently known),by Arab travelers and merchants of the 9th and 10th centuries AD.

(xii) Marco Polo visited the place in the late 13th century and left a detailed description of the land, the people along with their customs and religion.

(xiii) It was considerable maritime time and the ancient German and Greek maps refer to the town as ‘Maliarpha’.

(xv) After 1749, the British East India Company took possession of the settlement in . the name of Muhammad Ali Khan Wallaj ah, the Nawab of Arcot. In that same year, Mylapore was incorporated into the administration of the Presidency of Madras.

(xvi) In the late 19th and early 20th centuries the town became the commercial and intellectual hub of Madras city and home to British-educated lawyers and statesmen. 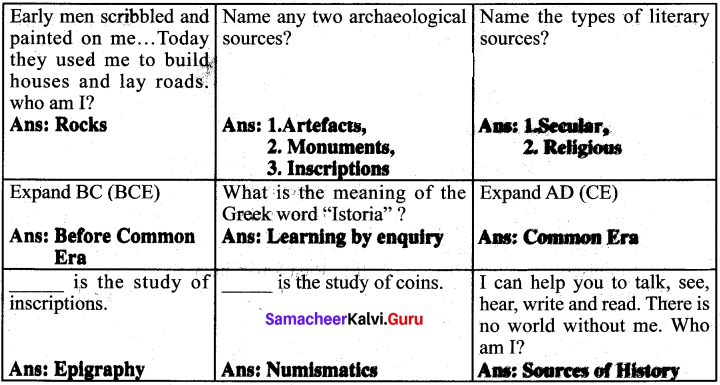 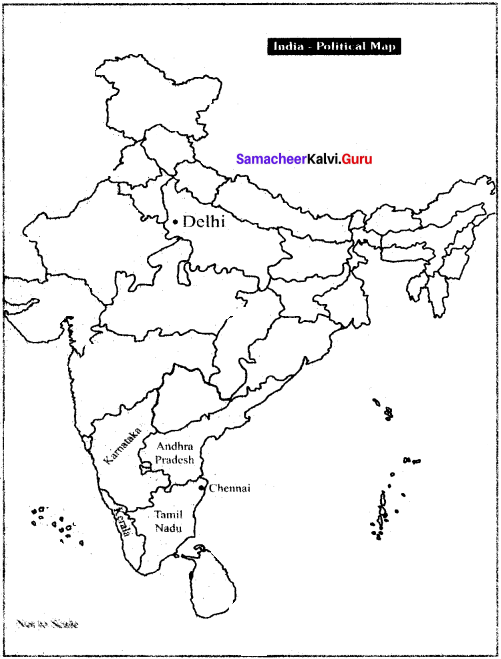 Question 2.
Who was the first ruler to give up war after victory?
(a) Bimbisara
(b) Raja Raja Chola
(c) Akbar
(d) Ashoka
Answer:
(d) Ashoka

Question 2.
Statement: ‘Dhamma’ is the Prakrit word for the Sanskrit term ‘Dharma’
Find out which of the following is related to the statement.
(a) Helping the poor
(b) Obedience to God
(c) Religious duty
(d) Tolerance
Answer:
(c) Religious duty

(b) Statement: Raja Raja Chola built the Big Temple. Find out which of the following is related of the statement
(a) Kumbakonam
(b) Tiruchi
(c) Madurai
(d) Thanjavur
Answer:
(d) Thanjavur

VI. Answer in one word :

Question 1.
What is meant by Numismatics?
Answer:
The study of Coins.

Question 3.
What do literary sources include?
Answer:

Question 1.
What is the importance of Sarnath pillar?
Answer:

Question 3.
What is meant by artefact?
Answer:
Art fact means an object that is made by a person, such as tool or a decoration, especially one that is of historical interest, on The museum’s collections include artefacts dating back to historic times.

Question 1.
Why should we study History?
Answer :

Question 1.
I reveal the lifestyle of the stone age people.
Answer:
Paintings

Question 2.
lam in between the use of forest stone tools and the invention of writing system.
Answer:
Prehistoric period

Question 3.
lam titled as numismatics and serve as one of the archaeological sources.
Answer:
coins

Question 5.
People say my service for the cause of public good was exemplary.
Answer:
Ashoka