Question 2.
Which of the following correctly describes the given triangle.

Question 5.
The diagram shows a square ABCD. If the line segment joints A and C, then mention the type of triangles so formed.

Solution:
For a square all sides are equal and each angle is 90°.
∆ABC and ∆ADC are isosceles right-angled triangles. 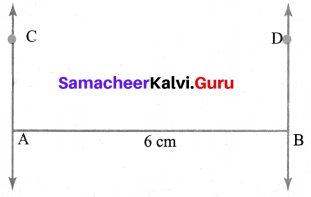 Question 7.
Is a triangle possible with the angles 90°, 90° and 0°? Why?
Solution:
No, a triangle cannot have more than one right angle

Question 11.
Study the given figure and identify the following triangles.