Occurrence of Hydrogen – the sun and stars are composed of 85—95% Hydrogen. It is present in the form of water, organic compounds and in all lIving matter.

Occurrence of Hydrogen – the sun and stars are composed of 85—95% Hydrogen. It is present in the form of water, organic compounds and in all lIving matter.

Ortho hydrogen – The hydrogen molecule in which the nuclear spins of the two hydrogen atoms are in the same side. Magnetic moment of it is twice.

Para hydrogen – The hydrogen molecule in which the nuclear spins of the two hydrogen atoms are in the opposite side. Magnetic moment of it is zero.

Isotopic effect – In a chemical reaction, when one of the atoms in the reactants is replaced by one of its isotopes.

Uses of Deuterium – It is used to study the movement of ground water and the hydrogen atom transfer mechanism in chemical reactions.

Uses of Tritium – It is used as a tracer element and it find applications such as emergency exit signs, illumination of wrist watches.

Preparation of Tritium – It occurs naturally as a result of nuclear reactions induced by cosmic rays in the upper atmosphere.

Properties of hydrogen – It is a colourless, odourless, tasteless, lightest and inflammable gas.

Ortho H2O and Para H2O – At the temperature conditions of the earth (300K), the OPR of H2O is 3. It is known that the OPR of water in interstellar clouds and comets has more para- H2O (OPR = 2.5) than on Earth.

Physical properties – Water is a colourless and volatile liquid. Hydrogen bonding responsible for high melting and boiling points of water.

Temporary hardness – It is due to the presence of soluble bicarbonates of magnesium and calcium. It is removed by heating or by treating with lime.

Permanent hardness – It is due to the presence of soluble salts of magnesium and calcium in the form of chlorides and sulphates in water. It can be removed by washing soda or by ion exchange.

Ion exchange – Hardness of water can be removed by passing through an ion exchange bed like zeolites or polymer (resin) containing column.

Premutit (or) zeolite process – The softening of water process by using complex structure represented as Na2 – Z with sodium as exchangeable cations.

Chelating method – EDTA is used in this.

Heavy water – D2O. It is present as one part in 5000 parts of ordinary water.

Preparation of D2O – It is prepared by continuous electrolysis of ordinary water. It undergoes exchange reactions.

Uses of D2O – D2O is used in isotopic effect, used as moderator in nuclear reactors, used to prepare deuterium compounds.

Hydrogen peroxide (H2O2) – It is a pale blue (almost colourless) liquid. It is prepared by the action of dilute acid with metal peroxide.

Uses of H2O2 – Oxidising agent, mild antiseptic, as a bleaching agent in textile, paper and hair-care industry and used as reducing agent. 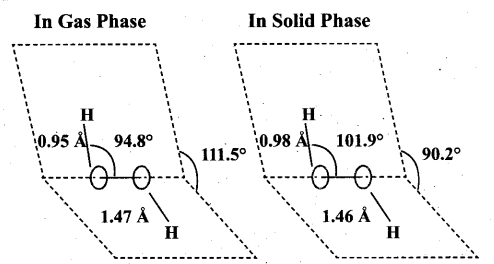 Hydrides – A binary hydride is a compound formed by hydrogen with other electropositive elements, e.g. LiH, MgH2.

Ternary hydrides – Compounds in which molecule is constituted by hydrogen and two types of elements, e.g. LiBH4, LiAlH4.

Hydrogen sponge – Metal hydride as (PdH) Palladium hydride. It is formed by a chemical reaction but it behaves like a physical storage method, i.e., it is absorbed and released like a water sponge.

Intra molecular hydrogen bonding – These bonds are those which occur within one single molecule. e.g.T ortho-nitrophenol and salicylaldehyde.

Gas hydrates – They are a kind of inclusion compounds, where gas molecules are trapped in a crystal lattice having voids of right size, with being chemically bonded, e.g., H3O+ in gas phase similar to methane hydrate.

Crystalline hydrates – In this type, hydrogen bonding is present. Water molecules serve to fill in the interstices and bind together structure, e.g., CuSO4.5H2O, Na2CO3.10H2O, FeSO4.7H2O.

The atomic bomb – The hydrogen bomb uses both nuclear fission and fusion is called atom bomb or Thermonuclear bombs.

The future fuel – Hydrogen is considered as a potential fuel as it is a clean burning fuel. This fuel is free from pollutants.