Chemical bonds – The interatomic forces which holds the constituent atoms/ions together in a molecule are called chemical bonds.

Kossel-Lewis approach – Elements other than noble gases, try to attain the completely filled electronic configuration by losing, gaining or sharing one or more electrons from their outer shell.

Octet rule – The atoms transfer or share electrons so that all atoms involved in chemical bonding obtain 8 electrons in their outer shell.

Formal charge – Formal charge of an atom in a molecule is the electrical charge difference between the valence electron in an isolated atom and the number of electrons assigned to that atom in the lewis structure.
Formal charge –
\(\mathrm{N}_{\mathrm{V}}-\left[\mathrm{N}_{l}+\frac{\mathrm{N}_{b}}{2}\right]\)

Ionic bond (or) electrovalent bond – The bond formed by the complete transfer of electrons leads to the formation of cation and an anion which are held together by the electrostatic attractive force.

Bond length – The distance between the nuclei of the two covalently bonded atoms is called bond length.

Bond order – The number of bonds formed between the two bonded atoms in a molecule is called the bond order.

Bond angle – A fixed angle created by the directional nature of the two covalent bonds which is between the two bonds in a molecule is called bond angle.

Bond enthalpy – It is defined as the minimum amount of energy required to break one mole of a particular bond in the molecule in their gaseous state.

Polarisation – A distortion in the electron cloud of the anion and its electron density drift towards the cation which results in some sharing of the valence electrons between these ions. Thus, a partial covalent character is developed between them. This phenomenon is called polarisation.

Fajan’s rule – The extent of polarisation in an ionic compound is given by Fajan’s rule.

VSEPR theory – Valence Shell Electron Pair Repulsion Theory: It is useful in predicting the shape of the molecules. 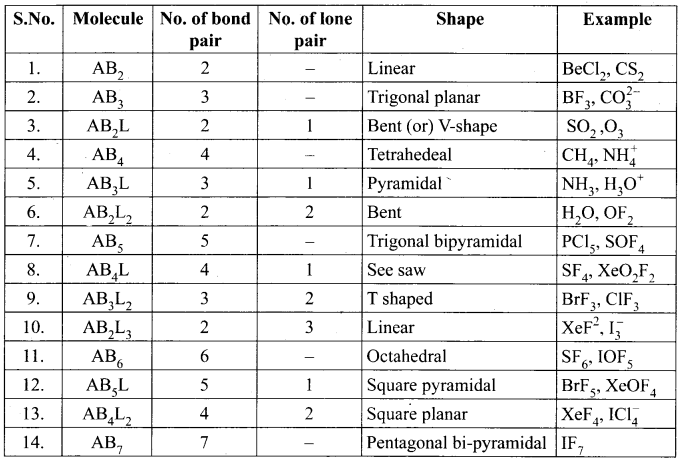 Sigma bond (σ) – When two atomic orbitals overlap linearly along the axis, the resultant bond is called a bond.

Hybridisation – It is a process of mixing of atomic orbitals of the same atom with comparable energy to form equal number of new equivalent orbitals with same energy.

Types of hybridisation with shape and examples

Metallic bonding – The forces that keep the atoms of the metal so closely in a metallic crystal constitute is known as metallic bond (or) electronic bond.