Question 11.
Proton and α – particle have the same de-Broglie wavelength. What is same for both of them?
(a) Time period
(b) Energy
(c) Frequency
(d) Momentum
Hint: λ = h/p, when wavelength λ is same, momentum p is also same.
Answer:
(d) Momentum

Question 14.
The output transducer of the communication system converts the radio signal into
(a) Sound
(b) Mechanical energy
(c) Kinetic energy
(d) None of the above
Answer:
(a) Sound

Question 24.
Give the factors that are responsible for transmission impairments.
Answer:

Question 27.
State Biot-Savart’s law.
The magnitude of magnetic field \(d \vec{B}\) at a point P at a distance r from the small elemental length taken on a conductor carrying current varies

Question 28.
Give the principle of AC generator.
Answer:
Alternators work on the principle of electromagnetic induction. The relative motion between a conductor and a magnetic field changes the magnetic flux linked with the conductor which in turn, induces an emf. The magnitude of the induced emf is given by Faraday’s law of electromagnetic induction and its direction by Fleming’s right hand rule.

Question 30.
What are the Cartesian sign conventions for a spherical mirror?
Answer:

Question 32.
What is binding energy of a nucleus? Give its expression.
Answer:
when Z protons and N neutrons combine to form a nucleus, mass equal to mass defect disappears and the corresponding energy is released. This is called the binding energy of the nucleus (BE) and is equal to (Δm)c2 .
BE = (Zmp + Nmn – M ) c2

Since the electric dipole moment vector \(\vec{p}\) is from -q to +q and is directed along BC, the above equation is rewritten as

where P̂ is the electric dipole moment unit vector from -q to +q.
The electric field at a point C due to -q is

The direction of \(\vec{E}\)tot is shown in Figure
If the point C is very far away from the dipole then (r >> a).
Under this limit the term(r2 – a2) ≈ r4 Substituting this into equation, we get

If the point C is chosen on the left side of the dipole, the total electric field is still in the direction of \(\vec{p}\). 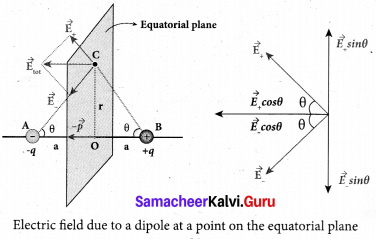 By substituting equation (1) into equation (2), we get

Question 34.
(b) Obtain the condition for bridge balance in Wheatstone’s bridge.
Answer:
An important application of Kirchhoff’s rules is the Wheatstone’s bridge. It is used to compare resistances and also helps in determining the unknown resistance in electrical network. The bridge consists of four resistances P, Q, R and S connected, A galvanometer G is connected between the points B and D. The battery is connected between the points A and C. The current through the galvanometer is IG and its resistance is G. 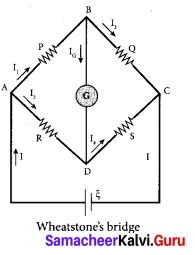 This is the bridge balance condition. Only under this condition, galvanometer shows null deflection. Suppose we know the values of two adjacent resistances, the other two resistances can be compared. If three of the resistances are known, the value of unknown resistance (fourth one) can be determined.

Question 35.
(a) Show the time period of oscillation when a bar magnet is kept in a uniform magnetic field is T = 2π\(\sqrt{\frac{1}{p_{m} \mathrm{B}}}\). in second, where I represents moment of interia of the bar magnet, p<sub<m is the magnetic moment and is the magnetic field.
Answer:
The magnitude of deflecting torque (the torque which makes the object rotate) acting on the bar magnet which will tend to align the bar magnet parallel to the direction of the uniform magnetic field \(\overrightarrow{\mathrm{B}}\) is
\(\vec{\tau}\) = pm B sin θ
The magnitude of restoring torque acting on the bar magnet can be written as
\(|\vec{\tau}|=\mathrm{I} \frac{d^{2} \theta}{d t^{2}}\)
Under equilibrium conditions, both magnitude of deflecting torque and restoring torque will be equal but act in the opposite directions, which means
\(\mathrm{I} \frac{d^{2} \theta}{d t^{2}}=-p_{m} \mathrm{B} \sin \theta\)
The negative sign implies that both are in opposite directions. The above equation can be written as
\(\frac{d^{2} \theta}{d t^{2}}=-\frac{p_{m} B}{I} \sin \theta\)
This is non-linear second order homogeneous differential equation. In order to make it linear, we use small angle approximation, i.e., sin θ ≈ θ, we get
\(\frac{d^{2} \theta}{d t^{2}}=-\frac{p_{m} \mathrm{B}}{\mathrm{I}} \theta\)
This linear second order homogeneous differential equation is a Simple Harmonic differential equation. Therefore,
Comparing with Simple Harmonic Motion (SHM) differential equation \(\frac{d^{2} x}{d t^{2}}=-\omega^{2} x\)
where ω is the angular frequency of the oscillation. 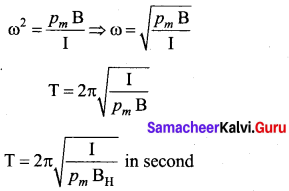 where, BH is the horizontal component of Earth’s magnetic field.

Question 35.
(b) An inductor of inductance L carries an electric current i. How much energy is stored while establishing the current in it?
Answer:
Energy stored in an inductor: Whenever a current is established in the circuit, the inductance opposes the growth of the current. In order to establish a current in the circuit, work is done against this opposition by some external agency. This work done is stored as magnetic potential energy. Let us assume that electrical resistance of the inductor is negligible and inductor effect alone is considered. The induced emf eat any instant t is
ℰ = \(-\mathrm{L} \frac{d i}{d t}\) …(1)
Let dW be work done in moving a charge dq in a time dt against the opposition, then
dW = -edq = -ℰdq = -ℰidi [ ∵ dq = idt]
Substituting for e value from equation (1)
= \(-\left(-\mathrm{L} \frac{d i}{d t}\right) i d t\)
dW = Lidt ……. (2)
Total work done in establishing the current i is
This work done is stored as magnetic potential energy.

Question 36.
(a) Using Faraday’s law of electromagnetic induction, derive an equation for motional emf.
Answer:
Motional emf from Faraday’s law: Let us consider a rectangular conducting loop of width l in a uniform magnetic field \(\overrightarrow{\mathrm{B}}\) which is perpendicular to the plane of the loop and is directed inwards. A part of the loop is in the magnetic field while the remaining part is outside the field. 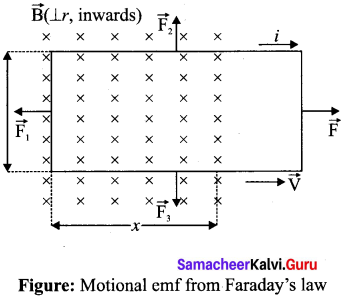 When the loop is pulled with a constant velocity \(\overrightarrow{\mathrm{v}}\) to the right, the area of the portion of the loop within the magnetic field will decrease. Thus, the flux linked with the loop will also decrease. According to Faraday’s law, an electric current is induced in the loop which flows in a direction so as to oppose the pull of the loop.
Let x be the length of the loop which is still within the magnetic field, then its area is lx. The magnetic flux linked with the loop is
ΦB = \(\int_{A} \vec{B} \cdot d \vec{A}=B A \cos \theta\)
Here θ = 0° and cos 0° = 1
= BA
ΦB = Blx ……… (1)

Question 36.
(b) Derive the mirror equation and the equation for lateral magnification. The mirror equation:
Answer:
The mirror equation establishes a relation among object distance u, image distance v and focal length/for a spherical mirror. An object AB is considered on the principal axis of a concave mirror beyond the center of curvature C.
Let us consider three paraxial rays from point B on the object.
The first paraxial ray BD travelling parallel to principal axis is incident on the concave mirror at D, close to the pole P. After reflection the ray passes through the focus F. The second paraxial ray BP incident at the pole P is reflected along PB’. The third paraxial ray BC passing through centre of curvature C, falls normally on the mirror at E is reflected back along the same path.
The three reflected rays intersect at the point B’. A perpendicular drawn as A’ B’ to the principal axis is the real, inverted image of the object AB. 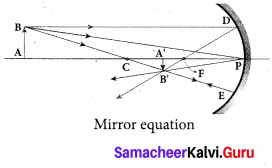 The above equation (4) is called mirror equation

In this process, a part of the photon energy is used for the ejection of the electrons from the metal surface (photoelectric work function Φ0) and the remaining energy as the kinetic energy of the ejected electron. From the law of conservation of energy,
hυ = Φ0 + \(\frac { 1 }{ 2 }\) mv2 …… (1)
where m is the mass of the electron and u its velocity

If we reduce the frequency of the incident light, the speed or kinetic energy of photo electrons is also reduced. At some frequency v0 of incident radiation, the photo electrons are ejected with almost zero kinetic energy. Then the equation (1) becomes
hυ0 = Φ0
where v0 is the threshold frequency. By rewriting the equation (1), we get
hυ = hυ0 + \(\frac { 1 }{ 2 }\) mv2 …….(2)
The equation (2) is known as Einstein’s Photoelectric equation.
If the electron does not lose energy by internal collisions, then it is emitted with maximum kinetic energy Kmax. Then
Kmax = \(\frac { 1 }{ 2 }\) mv2max
where υmax is the maximum velocity of the electron ejected. The equation (1) is rearranged as follows:
Kmax = hυ – Φ0

Question 37.
(b) Derive the energy expression for hydrogen atom using Bohr atom model.
Answer:
The energy of an electron in the nth orbit
Since the electrostatic force is a conservative force, the potential energy for the orbit is

The efficiency ( η) of full wave rectifier is twice that of a half wave rectifier and is found to be 81.2 %. It is because both the positive and negative half cycles of the ac input source are rectified.

Question 38.
(b) Give the applications of ICT in mining and agriculture sectors.
Answer:
(i) Agriculture
The implementation of information and communication technology (ICT) in agriculture sector enhances the productivity, improves the living standards of farmers and overcomes the challenges and risk factors.
(a) ICT is widely used in increasing food productivity and farm management.
(b) It helps to optimize the use of water, seeds and fertilizers etc.
(c) Sophisticated technologies that include robots, temperature and moisture sensors, aerial images, and GPS technology can be used.
(d) Geographic information systems are extensively used in farming to decide the suitable place for the species to be planted.