Answer all the questions. [15 x 1 = 15]
Choose the most suitable answer from the given four alternatives.

Question 1.
Carbon forms two oxides, namely carbon monoxide and carbon dioxide. The equivalent mass of which element remains constant?
(a) Carbon
(b) Oxygen
(c) Both carbon and oxygen
(d) Neither carbon nor oxygen
Answer:
(b) Oxygen

Question 9.
Consider the following statements.
(i) Henry’s law is applicable at moderate temperature and pressure only.
(ii) Highly soluble gases obey’s Henry’s law.
(iii) The gases react with the solvent do not obey Henry’s law.
Which of the above statements is/are not correct?
(a) (i) only
(b) (ii) only
(c) (iii) only
(d) (i) and (ii)
Answer:
(b) (ii) only

Question 12.
Which of the following carbocation will be most stable?

Question 13.
Which one of the following is used as a soil sterilizing agent?

Answer any six questions.in which question No. 20 is compulsory.

Question 21.
Calculate the formal charge on each atom of carbonyl chloride (COCl2)?
Answer: 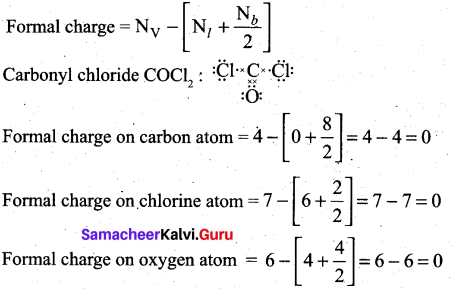 Question 23.
What are electrophiles? Give an example.
Answer:
Electrophiles: Electrophiles are reagents that are attracted towards negative charge or electron rich center. They are either positively charged ions or electron deficient neutral molecules.

∴ It is understood that the limiting reagent is Sulphur and the excess reagent is Fluorine.

Question 26.
Explain about the significance of de-Broglie equation.
Answer:

Question 28.
Describe about the biological importance of sodium and potassium.
Answer:

Question 30.
Calculate the work done when 2-moles of an ideal gas expands reversibly and isothermally from a volume of 500 mL to a volume 2 L at 25°C and normal pressure.
Answer:
Given

Question 32.
Explain – Resonance.
Answer:
(i) Certain organic compounds can be represented by more than one structure and they differ only in the position of bonding and lone pair of electrons. Such structures are called resonance structure and this phenomenon is called as resonance.

This phenomenon is also called as mesomerism or mesomeric effect.
(ii) For example, the structure of aromatic compounds such as benzene and conjugated system like 1,3 butadiene cannot be represent by a single structure and their observed properties can be explained on the base of a resonance hybrid.
(iii) Resonance structure of benzene.

(ii) When two or more substances combine to form a single substance, the reactions are called combination reactions.
A + B → C
Example: 2 Mg + O2 → 2MgO
[OR]
(b) (i) Electronegativity is the relative tendency of an element present in a covalently bonded molecule, to attract the shared pair of electrons towards itself.

Question 35.
(a) Explain the following observations,
(i) Aerated water bottles are kept under water during summer. (3)
(ii) Liquid ammonia bottle is cooled before opening the seal. (2)
[OR]
(b) Derive the relation between ΔH and ΔU for an ideal gas. (5)
Answer:
(a) (i) In aerated water bottles, CO2 gas is passed through the aqueous solution under pressure because the solubility of the gas in water is not very high. In summer, the solubility of the gas in water is likely to decrease because of the rise in temperature. Thus, in summer, more ’ of gas will be present above the liquid surface in the glass bottle. In case, the pressure of the gas becomes too high, the glass will not be able to withstand the pressure and the bottle may explode. To avoid this, the bottles are kept under water. As a result, the temperature is likely to decrease and the solubility of CO2 is likely to increase in aqueous solution resulting in decreased pressure.

qp is the heat absorbed at constant pressure and is considered as heat content.

3. Consider a closed system of gases which are chemically reacting to produce product gases at constant temperature and pressure with V. and Vf as the total volumes of the reactant and product gases respectively, and n. and nf are the number of moles of gaseous reactants and products. Then,
For reactants: PVi = niRT
For products : P Vf = nf RT

Question 36.
(a) (i) What are heterogenous equilibrium? Give an example. (2)
(ii) The atmospheric oxidation of NO 2NO(g) + O2(g) = 2NO2(g) was studied with initial pressure of 1-atm of NO and 1-atm of O2. At equilibrium partial pressure of oxygen is 0.52 atm. Calculate Kp of the reaction. (3)
[OR]
(b) (i) Explain the factors influencing the solubility of the solutes. (3)
(ii) Why the carbonated drinks are stored in a pressurised container? (2)
Answer:
(a) (i) Heterogeneous equilibrium: If the reactants and products of a reaction in equilibrium are in different phases, then it is called as heterogeneous equilibrium. 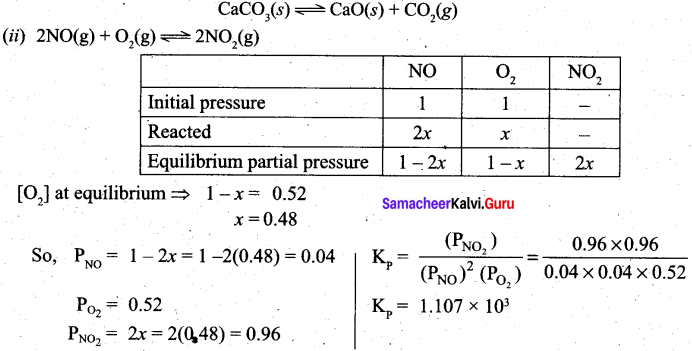 Question 37.
(a) (i) Explain – paper chromatography. (3)
(ii) What are stereo-isomerism? (2)
[OR]
(b) (i) Explain the homolytic fission of a covalent bond? (3)
(ii) Why chloroacetic acid is more acidic than acetic acid? (2)
Answer:
(a) (i) 1. It is an example of partition chromatography. A strip of paper acts as an adsorbent.
This method involves continues differential pardoning of components of a mixture between stationary and mobile phase. In paper chromatography, a special quality paper known as chromatographic paper is used. This paper act as a stationary phase.
2. A strip of chromatographic paper spotted at the base with the solution of the mixture is suspended in a suitable solvent which acts as the mobile phase. The solvent rises up and flows over the spot. The paper selectivity retains different components according to their different partition in the two phases where a chromatogram is developed.
3. The spots of the separated coloured components are visible at different heights from the position of initial spots on the chromatogram. The spots of the separated colourless compounds may be observed either under ultraviolet light or by the use of an appropriate spray reagent. 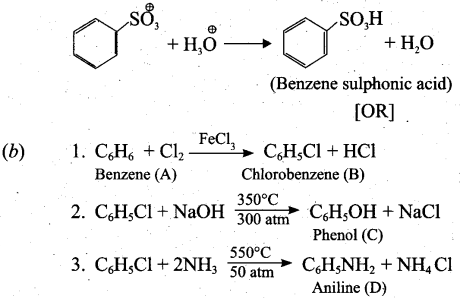