Question 3.
The coconut water and the edible part of coconut are equivalent to ………………………
(a) endosperm
(b) endocarp
(c) mesocarp
(d) embryo
Answer:
(a) endosperm

Question 9.
What are Archaebacteria?
Answer:
Archaebacteria are primitive prokaryotes and are adapted to thrive in extreme environments like hot springs, high salinity and low pH. e.g., Thermoplasma.

Question 10.
What is root cap? Mention its role.
Answer:
Root tip is covered by a dome shaped parenchymatous cells called root cap. It protects the meristematic cells in the apex.

Question 11.
What do you understand by the term “Pomology”?
Answer:
The branch of horticulture that deals with the study of fruits and their cultivation is called pomology.
Classify plastids based on storage & mention their storage component.

Question 14.
Give an account of Xanthophylls.
Answer:
Yellow (C40H56O2) pigments are like carotenes but contain oxygen. Lutein is responsible for yellow colour change of leaves during autumn season. Examples: Lutein, Violaxanthin and Fucoxanthin.

Answer any three questions in which question number 19 is compulsory. [3 x 3 = 9]

Question 15.
Point out the demerits of five kingdom classification.
Answer:

Question 16.
How the leaf hooks helps the Bignonia plant?
Answer:
In cat’s nail (Bignonia unguiscati) an elegant climber, the terminal leaflets become modified into three, very sharp, stiff and curved hooks, very much like the nails of a cat. These hooks cling to the bark of a tree and act as organs of support for climbing. 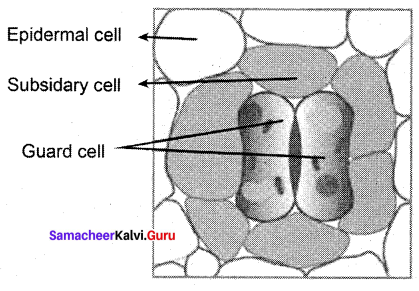 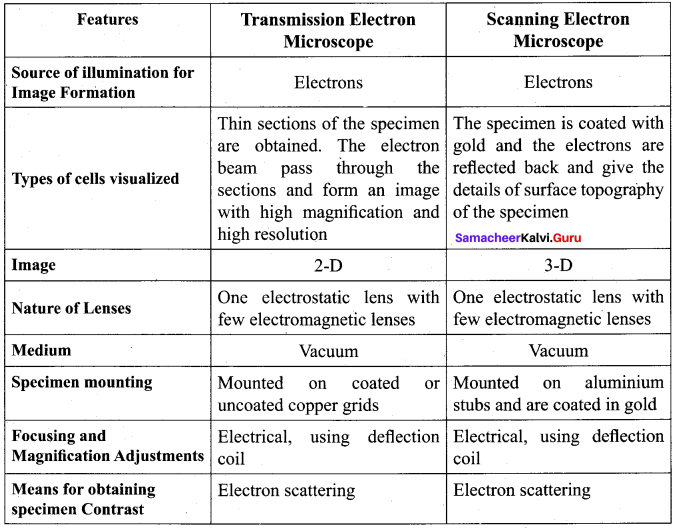 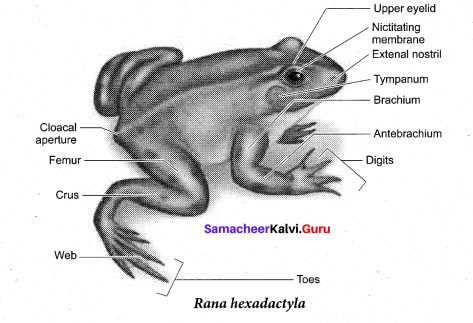 Question 14.
What are the functions of frontal lobe?
Answer:
The frontal lobe governs the Behaviour, Intelligence, Memory and Movement.

Question 17.
Label the given diagram.
Answer: 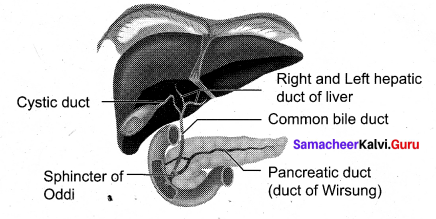 Question 18.
Define Isinglass.
Answer:
Isinglass is a high-grade collagen produced from dried air bladder or swim bladder of certain fishes. Viz. Catfish and carps. The processed bladder which is dissolved in hot water forms a gelatin having adhesive property. It is primarily used for classification of wine, beer and vinegar.

Question 19.
Write the symptoms of cretinism.
Answer:
Cretinism is caused due to hypothyrodisim in infants. A cretin child shows the following symptoms:

Asthma-It is characterized by narrowing and inflammation of bronchi and bronchioles and difficulty in breathing.Common allergens for asthma are dust, drugs, pollen grains, certain food items like fish, prawn and certain fruits etc.

Emphysema- Emphysema is chronic breathlessness caused by gradual breakdown of the thin walls of the alveoli decreasing the total surface area of a gaseous exchange, i.e., widening of the alveoli is called emphysema. The major cause for this disease is cigarette smoking, which reduces the respiratory surface of the alveolar walls.

Bronchitis-The branch? when it gets inflated due to pollution smoke and cigarette smoking, causes bronchitis. The symptoms are cough, shortness of breath and sputum in the lungs.

Pneumonia-Inflammation of the lungs due to infection caused by bacteria or vims is called pneumonia. The common symptoms are sputum production, nasal congestion, shortness of breath, sore throat, etc.

Tuberculosis-Tuberculosis is caused by Mycobacterium tuberculae. This infection mainly occurs in the lungs and bones.Collection of fluid between the lungs and the chest wall is the main complication of this disease.

Long exposure can give rise to inflammation leading to fibrosis. Silicosis and asbestosis are „ occupational respiratory diseases resulting from inhalation of particle of silica from sand grinding ‘ and asbestos into the respiratory tract. Workers, working in such industries must wear protective masks.

The junction between the motor neuron and the sarcolemma of the muscle fibre is called the neuromuscular junction or motor end plate. When nerve impulse reaches a neuromuscular junction, acetylcholine is released. It initiates the opening of multiple gated channels in sarcolemma. The action potential travels along the T-tubules and triggers the release of calcium ions from the sarcoplasmic reticulum.

Utilizing the energy released from hydrolysis of ATP, the myosin head rotates until it forms a 90° angle with the long axis of the filament. In this position myosin binds to an actin and activates a contraction – relaxation cycle which is followed by a power stroke.

The power stroke (cross-bridge tilting) begins after the myosin head and hinge region tilt from a 90° angle to a 45° angle. The cross-bridge transforms into strong, high-force bond which allows the myosin head to swivel. When the myosin head swivels it pulls the attached actin filament towards the centre of the A-band.
The myosin returns back to its relaxed state and releases ADP and phosphate ion. A new ATP molecule then binds to the head of the myosin and the cross-bridge is broken.

The repeatedly formation of cross-bridge cycles cause the sliding of the filaments only but there is no change in the lengths of either the thick or thin filaments. The Z- discs attached to the actin filaments are also pulled inwards from both the sides, causing the shortening of the sarcomere (i.e. contraction). This process continues as long as the muscle receives the stimuli and a steady flow of calcium ions.

When motor impulse stops, the calcium ions are pumped back into the sarcoplasmic reticulum, results in the masking of the active sites of the actin filaments. The myosin head fails to bind with the active sites of actin and these changes cause the return of Z – discs back to their original position, i.e. relaxation.

Describe the central nervous system.
Answer:
Central neural system (CNS): The CNS includes the brain and the spinal cord, which are protected by the bones of the skull and vertebral column. During its embtyonic development, CNS develops from the ectoderm.

Brain: The brain acts as the command and control system. It is the site of information processing. It is located in the cranial cavity and is covered by three cranial meninges. The outer thick layer is Duramater which line? the inner surface of the cranial cavity; the median thin layer is Arachnoid mater which is separated from the duramater by a narrow subdural space.

The innermost layer is Piamater which is closely adhered to the brain but separated from the arachnoid mater by the subarachnoid space. The brain is divided into three major regions: Forebrain, Midbrain and Hindbrain.

Fore Brain: It comprises the following regions: Cerebrum and Diencephalon. Cerebrum is the ‘seat of intelligence and forms the major part of the brain. The cerebrum consists of an outer cortex, inner medulla and basal nuclei. The superficial region of the cerebrum is called cerebral cortex, which looks grey due to the presence of unmyelinated nerve cells. Cerebral cortex consists of neuronal cell body, dendrites, associated glial and blood vessels. The surface of the cerebrum shows many convolutions (folds) and grooves.

The folds are called gyri (singular gyrus); the shallow grooves between the gyri are called sulci (singular sulcus) and deep grooves are called fissures. These sulci and gyri increase the surface area of the cerebral cortex. Several sulci divide the cerebrum into eight lobes: a pair of frontals, parietals, temporals and occipital lobes.

Mid brain: The mid brain is located between the diencephalon and the pons. The lower portion of the midbrain consists of a pair of longitudinal bands of nervous tissue called cerebral peduncles which relay impulses back and forth between cerebrum, cerebellum, pons and medulla. The dorsal portion of the midbrain consists of four rounded bodies called corpora quadrigemina which acts as a reflex centre for vision and hearing.

Hind brain: Rhombencephalon forms the hind brain. It comprises of cerebellum, pons varolii and medulla oblongata. Cerebellum is the second largest part of the brain. It consists of two cerebellar hemispheres and central worm shaped part, the vermis. The cerebellum controls and coordinates muscular movements and body equilibrium. Any damage to cerebellum often results in uncoordinated voluntary muscle movements.

Pons varoli: It lies infront of the cerebellum between the midbrain and the medulla oblongata. The nerve fibres in the pons varolii form a bridge between the two cerebellar hemispheres and connect the medulla oblongata with the other region of the brain. The respiratory nuclei found in the pons cooperate with the medulla to control respiration.
Medulla oblongata: It forms the posterior most part of the brain. It connects the spinal cord with various parts of the brain. It receives and integrates signals from spinal cord and sends it to the cerebellum and thalamuj. Medulla contains vital centres that control cardio vascular reflexes, respiration and gastric secretions.