State And Society In Medieval India Question 3.
The establishment of ……………… empire changed the administrative and institutional structures of South India.
(a) Bahmani
(b) Vijayanagar
(c) Mughal
(d) Nayak
Answer:
(b) Vijayanagar

II. Find out the correct statement.

Question 1.
(i) The establishment of the Vijayanagar Kingdom witnessed the most momentous . development in the history of South India.
(ii) The Saluva dynasty ruled for a longer period.
(iii) The rulers of Vijayanagara had smooth relations with the Bahmani Sultanate.
(iv) Rajput kingdoms attracted migrants from Persia and Arabia.
Answer:
(i) and (iv) are correct

Question 2.
(i) The Nayak Kingdom came up in Senji.
(ii) The appointment of Telugu Nayaks resulted in the migration of Telugu-speaking people from Madurai.
(iii) Mughal Empire started declining from the time of Jahangir.
(iv) The Europeans came to India in search of slaves.
Answer:
(i) and (ii) are correct

Question 3.
(i) Mythical geneologies were collected by Col. Mackenzie.
(ii) Indigo was the most important beverage crop in India.
(iii) Mahmud Gawan was the minister in Alauddin Khalji’s kingdom.
(iv) The Portuguese built their first fort in Goa.
Answer:
(i) is correct

V. Answer all questions given under each heading.

(d) Mention the enclaves of the Dutch, the English, the French and the Danes in India.
Answer:
The Dutch were in Pulicat (and later Nagapatnam)
the English in Madras
the French in Pondicherry and
the Danes in Tarangampadi (Tranquebar).

(b) What is a guild?
Answer:
The occupational caste groups are referred to as guilds.

Question 3.
Mention the two natural advantages that India had in cotton weaving.
Answer:
India had two natural advantages in cotton weaving. The first was that cotton grew in almost all parts of India, so that the basic raw material was easily available. Second, the technology of producing a permanent colour on cotton using vegetable dyes was known from very early times in India.

Question 4.
What were the factors which facilitated urbanization?
Answer:

Question 5.
What is sericulture?
Answer:

(ii) The first six Mughal emperors are referred to as the ‘Great Mughals’. Aurangzeb was the last of the great Mughals.

(iii) Akbar consolidated the Mughal empire through conquests and through a policy of conciliation with the Religious based kingdoms of Rajasthan.

(iv) The Mughal empire through began to disintegrate after Aurangzeb, continued to exist nominally till 1857 A.D. (C.E.) when the British finally ended the virtually non-existent empire.

(v) A new power centre rose in Maharashtra in the seventeenth century, and the Marathas
under the leadership of Shivaji seriously undermined the authority of the Mughals in western India.

(vi) At its height, the empire stretched over most of the Indian sub-continent.

(vii) Only the south-western region of Kerala and southern Tamilnadu were not directly under Mughal rule.

(ii) The administrative machinery was re-organised during Chola rule.

(iii) The basic unit of local administration was the village (ur), followed by the sub-region (nadu) and district (kottam). Tax-free villages granted to Brahmins were known as brahmadeya. Marketing centres and towns were known as nagaram.

(iv) The ur, nadu, brahmadeya and nagaram each had its own assembly.

(v) They were responsible for the maintenance and management of the water resources and land; the local temples; resolving local issues and disputes; and for collecting the taxes due to the government.

(vi) While the Chola state did not intervene in this fundamental system of local administration, they introduced innovations in revenue administration by creating new revenue divisions (mandalam and valanadu). Several new taxes on agriculture and commerce were also introduced.

(vii) The second notable feature was the great increase in the construction of temples. This had two dimensions: new temples were constructed, and existing temples became multi-functional social and economic institutions.

(viii) The construction of great temples also was a reflection of the growing prosperity in the kingdom, since the activity involved great expenditure.

Question 1.
On the outline map of India mark the important places of medieval India.
Answer: 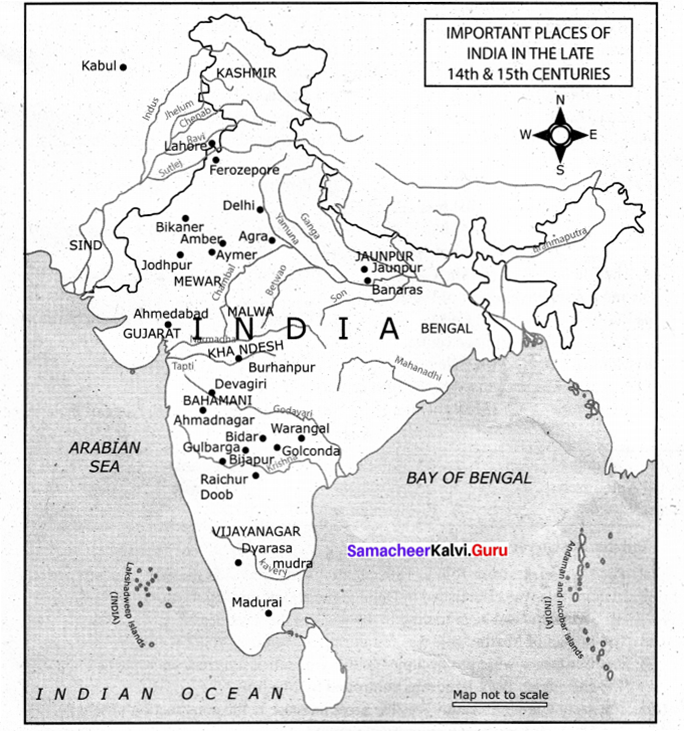 Question 2.
……………… was sent on military expeditions further south in the first decade of the 1300 AD.
(a) Muhammad-bin-Tughlaq
(b) Alauddin Bahman Shah
(c) Malik Kafur
(d) None of the above
Answer:
(c) Malik Kafur

II. Find out the correct statement.

Question 1.
(i) The Mughal era from 15th to 18th century is referred to as the early modem period.
(ii) Muslim rule was established in Delhi at the end of the 12th century.
(iii) Arab Muslims had been trading in the ports of the west coast.
(iv) The impact of Muslim rule was felt during the reign of Malik Kafur.
Answer:
(ii) and (iii) are correct

Question 2.
(i) The Europeans were pre-occupied with trying a find a dirrect sea route to India.
(ii) The spice trade from India was controlled by Muslims.
(iii) The second notable feature was the great increase in the construction of temple.
(iv) The Chola period was an enterprising peirod.
Answer:
(iii) and (iv) are correct

Question 3.
(i) Textiles accounted for nearly 90% of the total exports from India.
(ii) Ainnurruvar had their headquarters in Aihole.
(iii) Coromandel merchants operated from Persian Gulf and Red sea.
(iv) The Indian merchants were under contract to the Europeans.
Answer:
(ii) is correct

V. Answer all questions given under each heading.

(b) What do you know about Rajendra I?
Answer:
The Chola empire expanded further under Rajendra I.
He had successfully taken his armies as far to the north east up to the river Ganges.

(e) What did he earn from this war?
Answer:
This war earned him the title of “the Chola who had conquered the Ganga and Kadaram”.

(b) How were the temples?
Answer:
Temples were large economic enterprises requiring a variety of goods and services to function.

(d) How were the Urban centres?
Answer:
Most Urban centres displayed rural characteristics.
For instance, it was not uncommon to find fields with crops within the city.

Question 1.
How did the historian ‘Burton Stein describe the different periods of Indian History?
Answer:
The historian Burton Stein, uses the term ‘classical’ to describe the period up to the Gupta empire, and dates the ‘medieval’ period from the 7th century A.D.(CE) till the beginning of Mughal rule in the 16th century. The Mughal era, from the 16th to 18th century is referred to as the early modem peroid.

Question 3.
Mention the five Sultanates who came up in Deccan in the 15th century.
Answer:
By the end of the fifteenth century, five sultanates came up in the Deccan: Bijapur, Golkonda, Ahftiednagar, Berar and Bidar. Bijapur and Golkonda were the largest of these sultanates and the region entered a phase of considerable economic growth and expansion of trade.

Question 4.
How did the Vijayanagar empire wither away?
Answer:

Question 5.
What was the impact of Islamic rule on Indian society?
Answer:
The establishment of Islamic Rule in Delhi made a big impact on Indian society. Initially, Islam did not cause any social tension. Arab merchants, for instance, when they came and settled on Kerala coast, married local women and led a peaceful life. The situation changed when Islam became a state power. For a medieval ruler one way of asserting imperial authority was to demolish the place of worship of the enemies. Otherwise Islam as a monotheistic religion had its positive impact in Indian society. It played a decisive role in the evolution of a composite culture.

Question 6.
Why did the Europeans come to India?
Answer:
The Europeans came to India primarily in search of spices. But soon there was an explosion in the demand for Indian textiles in the European markets, often referred to as the ‘Indian craze’. This led to a significant expansion of textile production in India, which was accompanied by an expansion of the production of commercial crops like cotton and indigo and other dyes.

Question 7.
Give an account of genealogies collected by Colin Mackenzie.
Answer:
(i) Caste groups often petitioned the local ruler for permission to use various symbols of higher status, like the right to wear footw ear, the right to carry umbrellas, the right to use certain decorations at funerals and so on.

(ii) Each caste also created a mythical genealogy to establish its origins; this was used to justify the claim for the right to a higher status in the hierarchy.

(iii) These genealogies are found in many of the manuscripts collected by Colin Mackenzie.

Question 8.
Write a short note on the literary works of the Chola period.
Answer:

Question 9.
Explain the Art and Architecture of the Mughal period.
Answer:
The Mughals were well-known for their aesthetic values, and were great patrons of the arts. They left behind numerous monuments, in addition to constructing entire cities like Shahjahanabad (Delhi) and Fatehpur Sikri, gardens, mosques and forts. Decorative arts – especially jewellery set with precious and semi-precious gems for items of personal use – flourished under the patronage of the royal household and urban elites. The art of painting also flourished in the Mughal period. Primarily known as Mughal miniatures, they were generally intended as book illustrations or were single works to be kept in albums.

Question 10.
What happened in the business scenario in the beginning of the 18th century in India?
Answer:

Question 1.
Describe the major political changes.
Answer:
(i) The expansion of the Chola empire from the time of Rajaraja which eclipsed the Pandyan and Pallava kingdoms, extending north till Orissa.

(ii) From the twelfth century, the beginning of several centuries of Muslim rule in Delhi, extending throughout North India and the spread of Islam to different parts of the country.

(iii) By the end of the 13th century the eclipse of the great empire of the Cholas and the consequent rise of many religious kingdoms in South India. This ultimately culminated in the rise of the Vijayanagar empire which exercised authority over all of South India and came to be considered the bastion of religious rule in the south.

(iv) The consolidation of Muslim rule under the Mughals in the north, beginning in 1526 A.D. (C.E.) with the defeat of the Ibrahim Lodi by Babur. At its height, the Mughal empire stretched from Kabul to Gujarat to Bengal, from Kashmir to South India.

(v) The coming of the Europeans, beginning with the Portuguese who arrived on the west coast of India in 1498.

Question 2.
Explain the important feature of Indian agriculture.
Answer:
An important feature of Indian agriculture was the large number of crops that were cultivated. The peasant in India was more knowledgeable about many crops as compared to peasants in most of the world at the time. A variety of food grains like wheat, rice, and millets were grown apart from lentils and oilseeds. Many other commercial crops were also grown such as sugarcane, cotton and indigo. Other than the general food crops, south India had a regional specialization in pepper, cinnamon, spices and coconut.

In general, two different crops were grown in the different seasons, which protected the productivity of the soil. Maize and tobacco were two new crops which were introduced after the arrival of the Europeans. Many new varieties of fruit or horticultural crops like papaya, pineapple, guava and cashew nut were also introduced which came from the west, especially America. Potatoes, chillies and tomatoes also became an integral part of Indian food.