Electric Charge And Electric Current Question 4.
Potential near a charge is the measure of its ………… to bring a positive charge at that point.
(a) force
(b) ability
(c) tendency
(d) work
Answer:
(d) work

9th Standard Science Electric Charge And Electric Current Question 5.
In an electrolyte the current is due to the flow of …………. .
(a) electrons
(b) positive ions
(c) both (a) and (b)
(d) neither (a) nor (b)
Answer:
(a) electrons

Question 8.
Resistance of a wire depends on
(a) temperature
(b) geometry
(c) nature of material
(d) all the above
Answer:
all the above

Question 1.
Electrically neutral means it is either zero or equal positive and negative charges
Answer:
True

Question 1.
A bird sitting on a high power electric line is still safe. How?
Answer:
Birds don’t get shocked when they sit on electrical wires because they are not good conductors of electricity. Electricity flowing through a single power line at 35,000 volts will continue along the path of least resistance and bypass birds, because there is no difference in electrical potential.

Question 2.
Does a solar cell always maintain the potential across its terminals constant? Discuss.
Answer:
The electro-chemical process inside a battery provides electrons at the negative terminal and draws electrons from the positive terminal to maintain the current being drawn. By providing energy to the electrons, the cell is capable of maintaining an electric potential difference across the two ends of the external circuit.

Question 4.
Define electric current and give its unit.
Answer:
Current is the rate at which charges flow past a point on a circuit. Current (I) is represented as, I = \(\frac { q }{ t }\)
The standard SI unit for current is ampere with the symbol A.

Question 5.
State Ohm’s law.
Answer:
Ohm’s law states that electric potential difference across two points in an electrical circuit is directly proportional to the current passing through it. That is,
V~I
The proportionality constant is tne resistance (R) offered between the two points.
Hence, Ohm’s law is written as,
V = RI (or) V = IR
Where, V is the potential difference in volt (V), I is the current flow in ampere (A), R is the resistance in ohm (Ω)

Question 1.
Rubbing a comb on hair makes the comb get – 0.4C.
(a) Find which material has lost electron and which one gained it.
Answer:
The material is comb which gained electrons and the hair gained it.

Question 3.
The values of current I flowing through a resistor for various potential differences V across the resistor are given below. What is the value of resistor?
Answer: 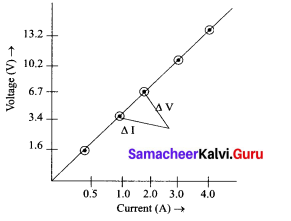 Question 2.
If, 25 C of charge is determined to pass through a wire of any cross-section in 50 s, what is the measure of current? 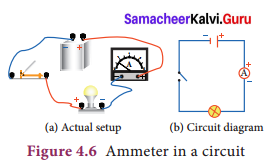 Question 2.
Define Electric potential.
Answer:
Electric potential is a measure of work done on unit positive charge to bring it to that point against all electrical forces. It is represented as ‘V’.

Question 3.
What are the effects of electric current?
Answer:
When current flows in a circuit, it exhibits various effects. The main effects are; heating, chemical and magnetic effects.

Question 4.
What is resistance?
Answer:
The resistance (R) is the measure of opposition offered by the component to the flow of electric current through it.

Question 6.
What is a trip switch?
Answer:
It is an electromechanical device which does not allow a current beyond a particular value by automatically switching off the connection.

Question 10.
What is the difference between electromagnetic force and potential difference?
Answer:
The e.m.f. refers to the voltage developed across the terminals of an electrical source when it does not produce current in the circuit.

Potential difference refers to the voltage developed between any two points in an electric circuit when there is current in the circuit. 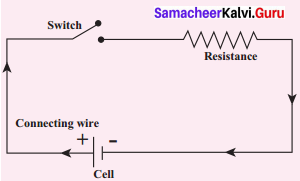 To represent an electrical wiring or solve problem involving electric circuits, the circuit diagrams are made. The four main components of any circuits namely the,

Question 2.
What is the magnetic effect of electricity?
Answer:
A wire or a conductor carrying current develops a magnetic field perpendicular to the direction of the flow of current. This is called magnetic effect of current. The discovery of the scientist Oersted and the ‘right hand thumb rule’ are detailed in the chapter on Magnetism and Electromagnetism in this book. Direction of current is shown by the right hand thumb and the direction of magnetic field is shown by other fingers of the same right hand. 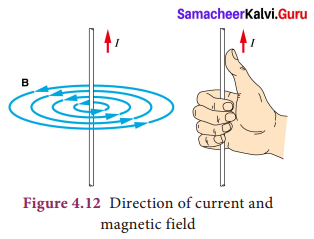 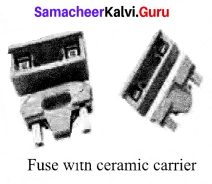 A fuse is another safety mechanism which works on joule heating principle. Fuse is a wire made up of a Nickel and Chromium alloy which has a definite melting point. If current passes through the fuse beyond a particular desired value, the excess heat produced melts the fuse wire, thus the electrical connection is cut-off. Fuse has to be kept in tight a ceramic enclosure to avoid the melting heat from producing fire accidents. 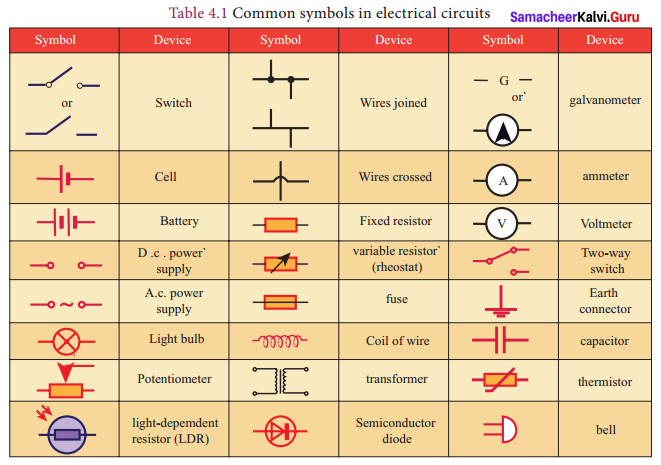