You can Download Samacheer Kalvi 8th Social Science Book Solutions Guide Pdf, Tamilnadu State Board help you to revise the complete Syllabus and score more marks in your examinations.

Question 10.
Who was the first Indian state to join the subsidiary Alliance?
(a) Oudh
(b) Hyderabad
(c) Udaipur
(d) Gwalior
Answer:
(b) Hyderabad

Question 4.
Sir Elijalmpey was the first Chief Justice of the Supreme Court at Fort William in Bengal.
Answer:
True

V. Which one of the following is correctly matched?

VI. Answer the following in one or two sentences

Question 1.
Write a short note on Black Hole Tragedy.
Answer:
There was a small dungeon room in the Fort William in Calcutta, where troops of the Nawab of Bengal Siraj – ud – daula, held 146 British Prisoners of war for one night. Next day morning, when the door was opened 123 of the prisoners found dead because of suffocation.

Question 3.
Mention the causes for the Battle of Buxar.
Answer:
Mir Qasim the son in law of the Nawab of Bengal revolted as he was angry with the British for misusing the destakes (free duty passes).

Question 4.
What were the causes for the First Mysore War?
Causes:

Question 5.
Bring out the results of the Third Maratha War.

VII. Answer the following in detail

Question 1.
Write an essay on second Carnatic war.
Answer:
In the 18th century, three Carnatic wars were fought between various Indian rulers, British and French East Indian Company on either side.

2. The French supported Chanda sahib and Muzaffar Jang, while the British supported the other claimants with the objective of keeping their interest and influence in the entire Deccan region.

1. Finally Dupleix, Chanda Sahib and Muzaffar Jang formed a grand alliance and defeated and killed Anwar-ud-din Khan, the Nawab of Carnatic, in the Battle of Ambur.

3. Chanda Sahib became the Nawab of Carnatic and rewarded the French with the grant of 80 villages around Pondicherry.

4. In the Deccan, the French defeated and killed Nasir Jang and made Muzaffar Jang as the Nizam.

5. The new Nizam gave ample rewards to the French.

6. He appointed Dupleix as the governor of all the territories in south of the river Krishna. Muzaffar Jang was assassinated by his own people.

7. Salabat Jang, brother of Nasir Jang was raised to the throne by Bussy.

8. Salabat Jang granted the Northern Circars to the French.

9. Dupleix’s power was at its zenith by that time.

1. In the meantime, Dupleix sent forces to besiege the fort of Trichy

2. Chanda Sahib also joined with the French in their efforts to besiege Trichy. Robert Clive’s proposal was accepted by the British governor, Saunders, and with only 200 English and 300 Indian soldiers, Clive was entrusted the task of capturing Arcot. His attack proved successful.

3. Robert Clive defeated the French at Ami and Kaveripak. With the assistance of Lawrence, Chanda Sahib was killed in Trichy. Muhammad Ali was made the Nawab of Arcot under British protection. The French Government recalled Dupleix to Paris.

1. Dupleix was succeeded by Godeheu who agreed the treaty of Pondicherry. According to it, both the powers agreed not to interfere in the internal affairs of the native states. They were to retain their old positions. New forts should not be built by either power. The treaty made the British stronger.

2. The second Carnatic war also proved inconclusive. The English proved their superiority on land by appointing Mohammad Ali as the Nawab of Carnatic. The French were still very powerful in Hyderabad. However, the predominant position of the French in the Deccan peninsula was definitely undermined in this war.

Question 2.
Give an account of the Fourth Anglo Mysore war.
Answer:
The Fourth Anglo – Mysore War:
Tipu Sultan did not forget the humiliating treaty of Srirangapatnam imposed upon him by Cornwallis in 1790.
Causes:

1. Wellesley declared war against Tipu in 1799. The war was short and decisive. As planned, the Bombay army under General Stuart invaded Mysore from the west.

2. The Madras army, which was led by the Governor – General’s brother, Arthur Wellesley, forced Tipu to retreat to his capital Srirangapatnam.

3. On 4th May 1799 Srirangapatnam was captured. Tipu fought bravely and was killed finally. Thus ended the fourth Mysore War and the whole of Mysore lay prostrate before the British.

Mysore after the War:

2. He made use of this precedent and declared in 1848 that if the native rulers adopted children without the prior permission of the Company, only the personal properties of the rulers would go to the adopted sons and the kingdoms would go to the British paramount power. This principle was called the Doctrine of Lapse.

3. It was bitterly opposed by the Indians and it was one of the root causes for the great revolt of 1857.

Question 4.
How did Lord Wellesley expand the British
Answer:
The Subsidiary Alliance:

Question 1.
Explain the causes for the success of the English in India.
Answer:
1. Lack of unity among Indian Stats:
Even though there were powerful kings and who ruled Punjab, Mysore and Maratha region, they lacked unity and fought with each other for various reasons. They failed to perceive the danger arising from the East India Company.

3. Development of textile:
By the beginning of the 19th century English made cotton textiles successfully ousted Indian goods from their traditional markets.

4. Scientific division of labour:
The production and growth of modem science in India was encouraged by the British with a view to further colonial interests.

5. Economic prospertiy:
The British had enough funds to pay its share holders that compelled them to finance the English wars in India.

IX. Mark the following on the River map of India

Question 5.
Under the terms of the Treaty of Aix – la – Chapelle, ……………. was returned back to the English.
(a) Madras
(b) Trichinopoly
(c) Hyderabad
(d) Calcutta
Answer:
(a) Madras

Question 14.
During the course of the third Anglo – Mysore war …………… took the command of the British Armyi
(a) Cornwallis
(b) Dalhousie
(c) Robert Clive
(d) Curzon
Answer:
(a) Cornwallis

Question 15.
The internal conflict among the ……………. was best utilised by the British.
(a) Nizams
(b) Marathas
(c) Nawabs
(d) Chauhans
Answer:
(b) Marathas

Question 1.
Within a year after the Battle of Wandiwash the English army totally routed the French Army.
Answer:
True

Question 4.
The idea of competition for recruitment was introduced first by the Charter Act, 1833.
Answer:
True

V. Answer the following in one or two sentences.

Question 1.
What was the motive behind the discovery of sea routes to India?
Answer:
The main motive behind those discoveries was to maximize profit through trade and to establish political supremacy.

Question 2.
What were the causes of the Second Anglo Mysore war?
Answer:
1. The English did not fulfill the terms of the treaty of 1769, when Haider’s territories were attacked in 1771 by Marathas, Haider did not get help from the British.

2. British captured Mahe, a French settlement within Haider’s Jurisdiction. It led to the formation of an alliance by Haider with the Nizam and Marathas against the English in 1779. 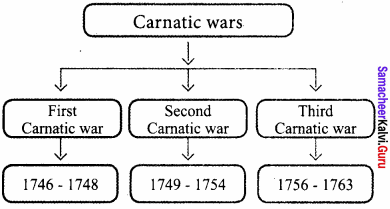 Question 4.
What were the results of the First Anglo Maratha War?
Answer:

Question 5.
Explain with a flow chart the period of the Anglo Mysore wars.
Answer:

Question 6.
Prepare a flow chart mentioning the period in which the Anglo Maratha wars were fought.
Answer: 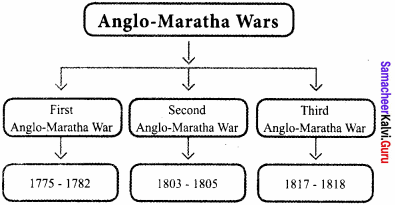 Question 11.
Name the provinces in which separates armies were organised during the British rule.
Answer:
During the early stage of British rule, three separate armies had been organised in three Presidencies of Bengal, Bombay and Madras.

Question 15.
What was the impact of the policies of Subsidiary Alliance and Doctrine of Lapse in India?
Answer:
This policy led to a South Indian rebellion (1800 – 01), Vellore Rebellion (1806) and the Great Rebellion (1857).