The Woman On Platform 8 Questions And Answers Question 1.
Where was Arun sitting?
Answer:
Arun was sitting on platform no. 8 at Ambala station.

The Woman On Platform 8 Question 3.
What were the sight Arun had seen on the platform?
Answer:
Arun saw a tide of people, the cries of various vendors and the newspaper boy.

The Woman On Platform 8 Question Answer Question 4.
What did the vendors sell?
Answer:
The vendor sold curds, lemons, sweet meat and newspapers.

The Woman On Platform 8 Answer Question 5.
How did the woman appear?
Answer:
The woman had a pale face and dark kind eyes. She wore no jewels and was dressed very simple in a white saree.

8th English The Woman On Platform 8 Question 6.
Where was Arun travelling to?
Answer:
Arun was travelling to his boarding school.

The Woman On Platform 8 One Word Answer Question 7.
What did the woman buy for him?
Answer:
The woman bought samosas and jalebies. She also ordered tea for Arun.

The Woman On Platform No 8 Question Answer Question 8.
What was the advise of Sathish’s mother?
Answer:
Sathish’s mother advised Arun not to talk to strangers and to be very careful of them.

Supplementary The Woman On Platform 8 Question 10.
What was the reaction of the woman at the end?
Answer:
When Satish’s mother was talking, she did not listen to her. But she was looking at Arun, as the train moved.

A. Miss Sullivan arrived at the Keller home when Helen was seven.
B. The deaf and blind Helen learned to communicate verbally.
C. But, eventually, Miss Sullivan’s effort was rewarded.
D. Before Helen Keller was two years old, she lost her sight and her hearing.
E. Miss Sullivan worked closely with Helen, her new student.
F. At times the teacher became frustrated.
1. DEFACB
2. DAEFCB
3. ACFDEB
4. CFDABE
5. FDACEB
Answer:
2. DAEFCB

Connecting To Self
Think you are in the following situation and write what would you do and why?
Answer: 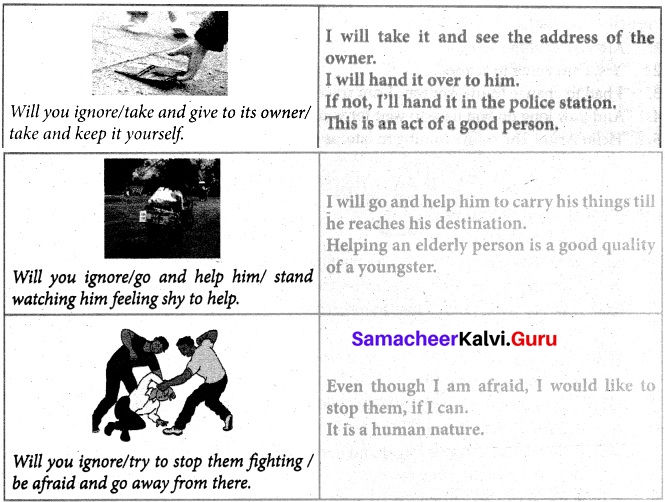 The Woman on Platform 8 Additional Questions

I. Choose the right answer (MCQ):

The Woman On Platform 8 Notes Question 2.
Trolleys rolled past me and I was conscious of the cries of the various ______
(a) vendors
(b) people
(c) children
(d) sellers
Answer:
(a) vendors

The Woman On Platform 8 Choose The Best Answer Question 3.
She wore no jewels and was dressed very ______ in a white saree.
(a) plain
(b) grandly
(c) elegantly
(d) simply
Answer:
(d) simply

The Woman On Platform 8 Match The Following Question 5.
The strange encounter had little effect on my ______
(a) hunger
(b) appetite
(c) desire
(d) anxiety
Answer:
(b) appetite

Question 3.
On what did Arun sit down?
Answer:
Arun sat down on his suitcase.

Question 4.
How was the woman dressed? ”
Answer:
The woman was dressed in simple White saree

Question 5.
Why did Arun like tier?
Answer:
Arun liked her for the simplicity of her dress, for her deep soft voifce and calmness of her face.

Question 6.
How old was the woman?
Answer:
The woman was over thirty years.

Question 9.
Who was Satish?
Answer:
Satish was one of Aran’s friends.

Question 1.
What did Satish tel! about Arun to his mother?
Answer:
Satish told her that Aran was one of his friends and die best bowler in the dass.

Question 5.
Where did Arun and Satish place themselves in the train?
Answer:
They picked up their suitcase and placed themselves at the open windows.

Read the following paragraph and answer the questions.

Question 1
Trolleys rolled past me and I was conscious ofthe cries ofthe various vendors-the men who ,sold curds and lemon, the sweet meat, seller, the newspaper boy- but I had lost interest in a that went on along the busy platform, and continued to stare across the railway tracks, feeling bored and a little lonely.

(b) What did the vendors sell?
Answer:
The vendors sold curd, lemons and sweet meat.

(c) What did Aran continue to do?
Answer:
Arun continued to stare across the railway tracks.

(d) How did he feel?
Answer:
He felt bored and lonely.

Question 2.
she smiled gratefully at me and pressed my hand. We walked together in silence until we reached the place where I had left my suitcase, one of my school fellows, Satish, a boy of about my age, had turned up with his mother.

(b) How did they walk?
Answer:
They walked together in silence.

(c) Who was Satish?
Answer:
Satish was one of Arun’s schoolfellows.

(d) Who came with Satish?
Answer:
Satish’s mother came along with him.

Question 3.
The train mowed slowly into the station, the engine hissing and sending out waves of steam. As it came to a stop, Satish jumped on the footboard ofa lighted cpmpartment and shouted,‘Come on, Arun, this one’s empty!’ and I picked up my suitcase and made a dash for the open door.

(b) How did the engine enter the station?
Answer:
The engine was hissing and sending out waves of steam.

(c) What did Satish do?
Answer:
Satish jumped on the footboard of a lighted compartment.

(e) What did Arun do?
Answer:
Arun picked up his suitcase and made a dash for the open door.

Question 1.
Describe the platform No. 8 at Ambala Station.
Answer:
Arun was waiting for his train on platform no. 8. He was browsing at the bookstall. When the train arrived, the platform looked like a hell. The people were shouting and agitating. As the carriage doors opened, a tide of people would sweep down upon the nervous little ticket collector at the gate. Arun would be caught in this rush and would be swept outside the statioil. There were trolleys, vendors selling various things like curd, lemon and sweet meat. There was also a boy selling newspapers on that busy platform.

The Woman on Platform 8 Summary

The story starts with Arun of 12, waiting for his train scheduled at midnight at Ambala station on platform no. 8. He was travelling alone, as his parents considered him to be big enough to travel alone.

He was early at the station feeling bored, suddenly, a soft voice asked him if he is alone. He saw a woman with pale face and dark kind eyes, simply dressed in a white sari. He observed that she was poor, but had a dignity in her appearance.

She asked whether his parents have come to see him off. He replied he can travel alone. The woman agreed which made Arun instantly like her. She was simple and her deep voice and serenity was liked by Arun.

The woman asked about his name and his train. Then she took him to the canteen. She ordered tea, samosas and jalebies for him. Arun could not refuse. She questioned many things, but listened to him intently. All her kind and generous behavior made Arun forget that she was a stranger.

Sathish, one of Aruns school fellows, came to the station with his mother.

They introduced each other. The woman addressed herself as Aruns mother without any hesitation. Sathish’s mother warned Arun to be careful of strangers. But Arun replied that he liked strangers which staggered her.

When the train came, they boarded. The woman took Aruns hand in her hands and smiled gently in an understanding way. Arun bade goodbye calling her “mother”. He gazed at the woman, till she got lost in the crowd.