A. Match the following 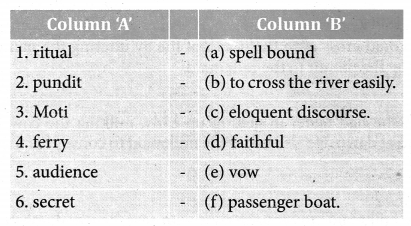 B. Fill in the blanks.

Crossing The River 8th Std Question 1.
What was the pundit’s discourse about?
Answer:
The pundits discourse was about God and Truth and similar tough and complex matters.

Crossing The River Questions And Answers Question 2.
Why did Moti, the milkmaid, feel happy?
Answer:
She left happy that she made a humble contribution towards the pundits physical well being by regularly supplying him with pure milk.

Crossing The River Summary 8th Standard Question 3.
What was the resolution of Moti?
Answer:
Moti’s resolution was that even if the landlord failed to pay her for the milk and her labour, she would not fail in her duty.

Crossing The River Book Back Answers Question 4.
Give reason for the pundit to ask for the milk at dawn.
Answer:
The pundit was under a vow for performing a certain ritual for which he needed the milk at down

Crossing The River 8th Standard Supplementary Question 6.
Mention an incident that shows the naivety of Moti.
Answer:
When Moti came late to pundits house, she explained that she couldn’t cross the river without the  of the boatman. When the pundit commented jocularly that one could cross even the ocean of life by uttering the name of Vishnu, she told him that she did not know about it. She thanked him for passing the secret on to her. The pandit laughed at her naivety.

Crossing The River Summary Question 7.
How did the milkmaid cross the river?
Answer:
She just uttered the name of Vishnu and walked across the river.

Crossing The River 8th Std Book Back Answers Question 8.
What was the secret shared by pundit to milkmaid?
Answer:
The secret was that one could cross even the ocean of life by buttering the name of Vishnu. This was shared by the pundit to the milkmaid.

8th Crossing The River Question 9.
How did the pundit appreciate the milk maid? Who else did he convey his thanks for?
Answer:
He appreciated the pain she had taken in getting up early, milking the cow and delivering the milk to him at dawn. He also asked the milkmaid to convey his thanks to the boatman.

Crossing The River Summary Class 8 Question 10.
Why did the pundit faint at the end of the story?
Answer:
When the pundit saw the mlilk maid crossing the river with ease, he was dumbstruck and almost fainted.

A. Select correct options to fill in the blanks.

B. Select option that correctly forms the 2nd pair similar to the 1st. 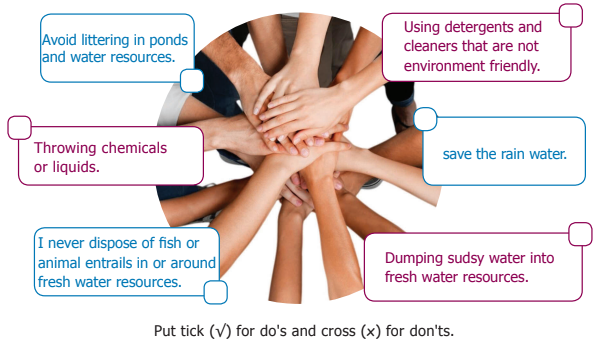 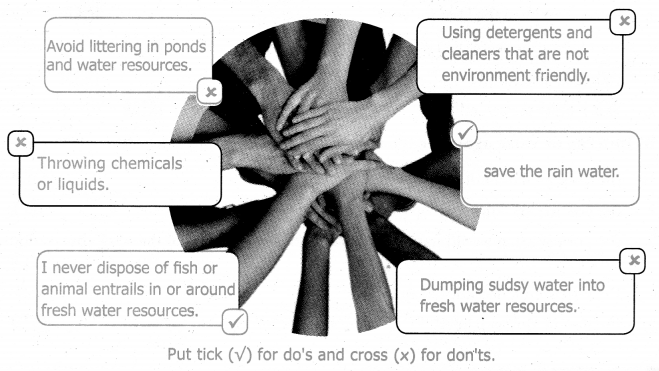 I Choose the correct answer.

Question 5.
The story draws a _____ between scholarship and innocence.
(a) similarity
(b) analogy
(c) equivalent
(d) contrast
Answer:
(d) contrast

III. dentify the character and speaker:

IV. Write True or False against each statement:

Question 1.
Who was the landlord?
Answer:
He was one of the admirers of the Pundit.

Question 2.
What was the name of the milkmaid?
Answer:
The milkmaids name was Moti.

Question 5.
What did Moti do, when she reached the river-bank?
Answer:
She paid reverence to the river.

Question 2.
What did the boatman tell to Moti?
Answer:
The boatman told her that it would not be possible for him to fly the boat in darkness as the river was in spate.

Question 1.
“The Pundit was an eloquent speaker”.Elucidate.
Answer:
The celebrated Pundit had many disciples and admirers as he was an eloquent speaker. Whenever he gave a discourse, hundreds of people gathered to listen to him. The milkmaid also made it a point to listen to him as she was sure that the Pundit was speaking about God and Truth. The only one who was very near to God and Truth could command such wisdom’, she thought. She was happy that she made a humble contribution to supplying milk to the Pundit.

X. Read the passage and answer the questions :

Question 1.
One day, while receiving the milk, the Pundit told Moti. “Woman! Can you bring the milk at the least an hour before the sunrise for only a month? I am under a vow for performing a certain ritual for which I need the milk that early.”
(a) Who was Moti?
Answer:
Moti was a milkmaid.

(b) What did the Pundit tell Moti?
Answer:
The Pundit told her to bring milk, an hour before the sunrise for only a month.

(c) Why did he say so?
Answer:
He said so because he was under a vow for performing a certain ritual.

Question 2.
Moti stepped out onto the road. It was a foggy dawn. No doubt the woman was kidding him – concluded the Pundit and he followed her tiptoe. Upon reaching the river-bank, Moti put her empty pot down and folded hands, paid obeisance to the river. Then, picking up the pot, she stepped into The water.

(a) How was the dawn?
Answer:
It was a foggy dawn.

(c) What did she do on reaching the river-bank?
Answer:
She folded her hands and paid reverence to the river.

The milkmaid, Moti, supplied milk to a celebrated Pundit who had many disciples and admirers. The milkmaid thought that it was a great privilege to serve a great Pundit and discharged her duties sincerely. One day, the Pundit asked her to deliver the milk at least an hour before sunrise, as he was under a vow for performing a certain ritual. The milkmaid agreed but came to deliver the milk long after sunrise. When questioned by the Pundit, she said that she couldn’t cross the river without the boatman. The Pundit commented jocularly that one could cross even the ocean of life by uttering the name of Lord Vishnu. She thanked the Pundit for passing on the secret to her.

Days passed and the period of Pundit’s vow came to an end. The Pundit thanked her and asked her to tell the boatman that he was pleased with him for his task. The milkmaid told him that she crossed the river without the boatman’s help. She just uttered the name of Vishnu and crossed the river. The Pundit was surprised to hear this. He followed her to know the truth. When he saw the milkmaid paying respect to the river and then crossing it with ease, he almost fainted.

While demonstrating the miracle of faith, the story also draws a contrast between scholarship and innocence. It shows the difference between a knowledge of there theory and the knowledge that works through one’s faith in God.