B. Find a line from the poem to match the pictures given below and write it in the blank.
Answer: 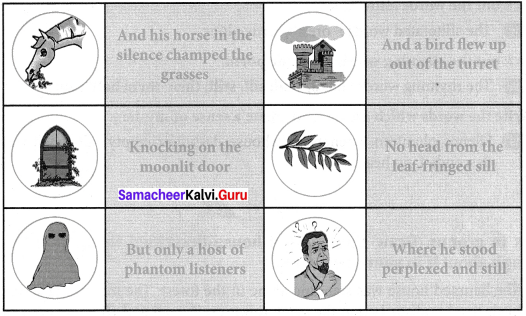 C. Read the statements and say True or False. Quote lines from the poem to support your answer
Answer:

The Listeners Poem 7th Standard Question 1.
Who is the speaker?
Answer:
The speaker is a traveller.

The Listeners Poem 7th Standard Question Answer Question 2.
What was the horse doing?
Answer:
The horse was biting and chewing the grass noisily.

The Listeners Poem Questions And Answers Pdf Class 7 Question 3.
Who were the listeners?
Answer:
The listeners were the phantom or ghosts who lived in the lonely house.

The Listeners Poem Questions And Answers Pdf Question 5.
What kind of feeling does the poem create?
Answer:
The poem creates a mystical, lonely, strange and eerie feeling.

E. Work in pairs and answer the questions given below.

The Listeners Poem Questions And Answers Question 3.
Write the words which are used to create a sense of mystery.
Answer:
Silence, phantom, listeners, lone house, dark stair, empty hall, lonely traveller, no one descended, no head.

F. Discuss in groups. Draw the haunted house described in the poem and write a paragraph about it in your own words.
Answer:
The haunted house was standing alone in the forest. The moonlight shone on its door, birds lived undisturbed in the small tower on its wall and climbers grew on its window sill. The dark steps lead to the empty hall. No one lived in the house for a long. 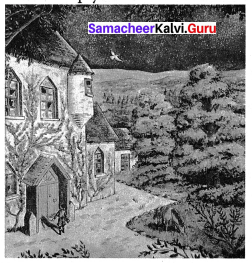 I. Read these lines and answer the questions given below.

Listeners Poem Questions And Answers Question 1.
‘Hearkening in an air stirred and shaken.
What is the figure of speech used here?
Answer:
Metaphor. This poetic device is used when a comparison is made between two different things or ideas. In the above line, air is being compared to something that – could be stirred and shaken but actually air cannot be picked up in order to shake.

Samacheer Kalvi 7th English Memory Poem Question 2.
Stood listening in the quiet of the moonlight To that voice from the world of men:
Stood thronging the faint moonbeams on the dark stair,

(a) What is the figure of speech used here?
Answer:
Anaphora. It is the deliberate repetition of the first part of the sentence in order to achieve an artistic effect.

(c) “Voice from the world of men” Whose voice is it?
Answer:
It is the voice of the Traveller.

7th Standard English Memory Poem 1st Term Question 1.
Why did the horse champ the grasses?
Answer:
The horse had travelled a long way to reach the lonely house in the forest and it was tired and hungry. So the horse bit and chewed the grass noisily and hastily.

The Listeners Poem Questions Question 5.
What were the ‘ghosts’ doing according to the Traveller?
Answer:
The ghosts who were the hosts of the lonely house, gathered at the steps leading to the empty hall. They were silently listening to the call of the Traveller.

7th English Book Poem Question 3.
From the poem “The Listeners” quote three phrases that tells the reader what time of day it is.
Answer:
Line 2 – Moonlit door; Line 14 – quiet of the moonlight; Line 16 – faint moonbeams on the dark stair.

The Listeners Poem Class 7 Question 4.
Justify with the words from the poem that the house was uninhabited.
Answer:
When the traveller knocked the house and called, no one responded. The floor around the house was ferny as no one used the area. Since, there was no one in the house, birds started living in the turret. Creepers grew on the window sill. Host of ghosts dwell in the empty house.

The Listeners Poem Questions And Answers Class 7 Question 5.
State the words that portray greenery in and around the house.
Answer:
Champed the grasses, forest’s ferny floor and leaf-fringed sill.

Question 2.
What do you know about the ‘phantom listeners’ by reading the poem?
Answer:
According to the lines in the poem, the phantom listeners are the ghosts who lived in r the lonely house of the forest. They were the host and the owner of the house while they were alive. But even after their death they continue to live there as a group.
In the dark silent night they listen attentively to the sound of the traveller which vibrates the air, by standing as a crowd under the dull moonlight on the dark stair that leads down to the empty hall.

Warm up
Question 1.
You are walking into a grove at 12 noon. You feel that somebody is following you. When you look behind, nobody is there. How would you feel? What would you do? Share it in the class.
Answer:
Once I was walking through a thick mango grove all alone at mid noon when the scorching sun was right above the head but the close branches of the mango trees formed an umbrella over me. As I walked solitary in the middle of the grove, I could hear only the rustle of the trees, and chirping of the birds. The giant shadows of the huge trees moved in front of me. A strange feeling tickled my stomach as if a powerful alien figure accompanied me. Fear choked my throat and I started walking fast making large paces. Crossing a ruined well I heard the frogs croak that doubled terror in me. But no human soul was seen around. I called all the gods on earth for my rescue. Alas! The discerning spirit within me told it was just an eerie feel in me. Now I realised it was just an impact of the ghost film that I had viewed the previous night. I laughed to myself and continued to walk boldly whistling towards my destination.

A man identified as the ‘Traveller’ arrives on horseback late at night at a lone house in a forest. He knocks on the moonlit door asking if anybody is there. His horse was hungrily biting and chewing the grass noisily amidst the silence of the forest.

The forest ground was covered with ferns. A bird flew from the cylindrical tower on the wall of the house which proved that it lived there undisturbed.

The Traveller knocks thrice on the door asking if anyone is there but no one responds to his call. Nobody peeped from the leaves creeping window sill nor they leaned down and looked into his grey eyes.

When the Traveller was standing confused and still, the host of ghosts that lived in the lonely house stood listening in the silence of the moonlight to the voice of the human. In the dull moonlight they stood crowded on the dark steps which lead to the empty hall in the house. They were attentively listening to the call of the lonely Traveller which disturbed the calm environment.