II. Match the statement with the Reason / Tick the appropriate answer: 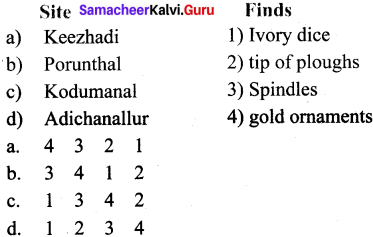 6th Social Guide Term 1 Question 3.
What do you know about Megalith?
Answer:
The term ‘Megalith’ is derived from Greek. ‘Megas’ means great and ‘lithos’ means stone. Using big stone slabs built upon the places of burial is known as Megalith.

Question 1.
Write briefly about the archaeological site at Kodumanal.
Answer:

Question 2.
Write about the Vedic women in a paragraph.
Answer:

IX. Pride and Joy – Let us find out die fact

Question 1.
Sentence making by using these new words.
(Shruti, Gramani, Rashtras, Iron Age, Semi-nomadic, Barter)
a. Shruti – Shruti works are considered to have been heard and transmitted by earthly sages.
b. Gramani – Gramani was the head of a village called Grama.
c. Rashtras – Rashtras were tribal kingdoms like Bharatas and Matsyas.
d. Iron Age – In India the Vedic period covers both the end of the Bronze Age and the start of the Iron Age.
e. Semi nomadic – Semi nomadic people lived usually in portable or temporary dwellings practicing seasonal migration.
f. Barter – Under barter system people exchanged services and goods for other services and goods in turn. 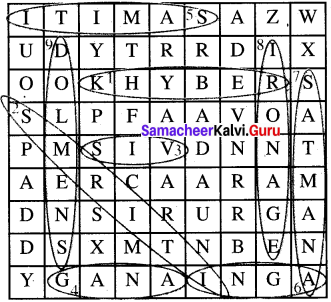 Question 1.
Collect information from Newspapers about archaeological finds with the help your teacher.
Answer:

(i) An archaeological site is a place where evidence of past activity is preserved.

(ii) Archaeological theory is used to interpret the archaeological record for a better understanding of human culture.

(iii) The archaeological record can consist of the earliest ancient findings as well as contemporary artefacts. For example ‘The Hindu’ dated August 10, 2017, published the information about Azhagankulam site. New finds link Azhagankulam site to Sangam Era. 12,000 artefacts unearthed so far; Archaeologists believe excavation could throw up more surprises. The excavation at Azhagankulam in the Vaigai River Valley show that the site could date back to the Sangam Age, quite like the archaeological site at Keezhadi in Sivaganga district.

(iv) Another example: Hindustan Times dated June 28, 2016. Archaeologists and Researchers have unearthed the crumbling remains of an ancient urban centre, equal in size and importance of that of Mohenjodaro. Keezhadi is a small village that lies past an unmanned railway crossing, several stretches of paddy fields and swaying palms in the Sivaganga district of Tamil Nadu, 12 kms from the city of Madurai.

Question 1.
State the differences between Indus and Vedic civilization.
Answer:

Question 5.
In economic, political and military matters, the king was assisted by the ______
(a) Gramani
(b) Senani
(c) Purohit
(d) Vidhata
Answer:
(b) Senani

Question 7.
In the Later Vedic Period the role of women in society ______
(a) increased
(b) declined
(c) remained the same as before
(d) became equal with the role of man
Answer:
(b) declined 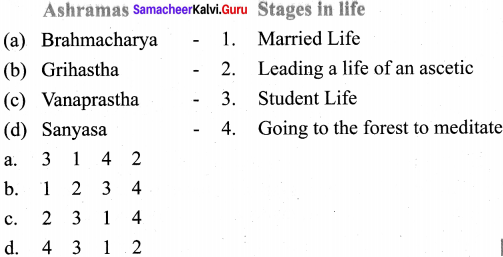 Question 1.
What is slash and burn agriculture?
Answer:
Slash and bum agriculture is a farming method that involves clearing the land by cutting and burning all the trees and plants on it. Cultivation is done there for a short time.

Question 2.
What were the crops cultivated?
Answer:

Question 5.
By whom were the powers of the Raj an limited?
Answer:

Question 6.
When did hereditary kingship begin to emerge?
Answer:

Question 7.
How were Janapadas formed?
Answer:
In later Vedic period, many Janas or Tribes were amalgamated to form Janapadas or Rashtras.

Question 8.
Who formed Trevji in the early Vedic society?

Question 10.
Mention the four ashramas which emerged during the later vedic period.
Answer:
Towards the end of the later Vedic period, the concept of four stages in life (the four
ashramas) developed.

Question 11.
Define the term Menhir.
Answer:
In Breton Language ‘Men’ means “stone” and ‘hir’ means “long.” They are monolithic pillars planted vertically into the ground in memory of the dead.

Question 1.
What about the Aryans and their home in India?
Answer:

(i) Aryans of the Rig Vedic Period were semi-nomadic. They were basically pastoral people with cattle as their main source of wealth.

(ii) In the Rig Vedic times, the Aryan homeland was Punjab, which was at that time called Sapta Sindhu, the land of seven rivers.

(iii) Around 1000 BC (BCE), Aryans in India moved eastward and settled in Indo- Gangetic Plain.

(iv) Use of iron axes and ploughs became widespread.

Question 2.
By whom was Rajan helped to protect his tribe?
Answer:

Question 3.
How did trade become extensive under the Vedic age?
Answer:

Question 4.
State the salient features of the Gurukula system of education.
Answer:

(i) The Archaeological Survey of India (ASI) excavated an ancient town dating to Sangam Age in Keezhadi village at Tirupathur taluk.

(iv) The Roman artefacts found at the site add to the evidence of ancient Indo -Roman trade relations.

(v) Periplus mentions the steel imported to Rome from Peninsular India was subj ected to duty in the port of Alexandria.

Question 6.
What are Menhirs ? Where are they find in Tamil Nadu?
Answer:

(i) Menhirs are monolithic pillars planted vertically into the ground in memory of the dead.

(ii) Menhir at Singaripalayam in Tirupur District and at Vembur in Theni District points to the existence of an ancient settlement along the banks of River Uppar. 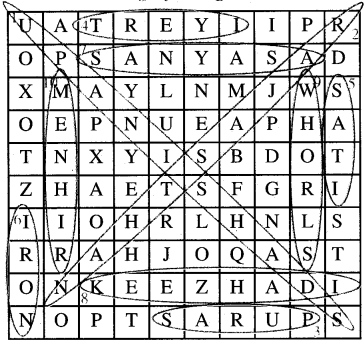