Question 2.
Which of the following titles were the titles of Mahendra Varma I?
(a) Mattavilasa
(b) Vichitra Chitta
(c) Gunabara
(d) all the three

Question 3.
Which of the following inscriptions describes the victories of Pulakesin II ?
(a) Aihole
(b) Saranath
(c) Sanchi
(d) Junagath
Answer:
(a) Aihole

II. Read the statement and tick the appropriate answer :

Question 2.
Consider Hie following statement! about Pallava Kingdom.
Statement I : Tamil literature flourished under Pallava rule, with the rise in popularity of Thevaram composed by Appar.
Statement II : Pallava King Mahendi avarman was the author of the play MattavilasaPrahasana.
a. I only
b. II only
c. Both I and II
d. Neither I nor II
Answer:
b. II only

VI. Answer in one or two sentences.

Question 2.
How can we classify the Pallava architecture?
Answer:

Question 3.
What do you know of Gatika?
Answer:

Question 5.
Make a note on Battle of Takkolam.
Answer:

b. See the picture and write a few sentences on it. 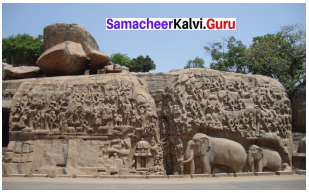 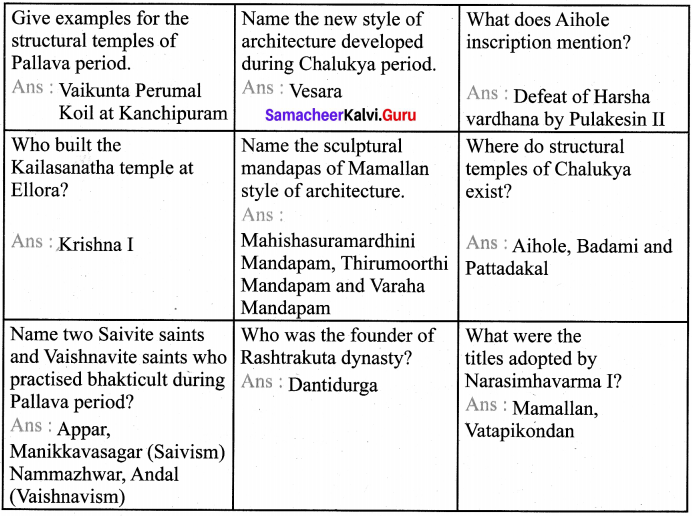 II. Match the statement with reason and tick the appropriate answer :

Question 2.
What do you know about the literary work of Mahendravarma?
Answer:

Question 5.
What is the significance of the Aihole inscription?
Answer:

Question 4.
Mention the contribution of Rashtrakutas to literature.
Answer:

Question 3.
Write about education and literature under the Pallavas.
Answer: