6th Standard Social Science Guide In English Medium Pdf Download Question 4.
The lowest unit of administration during the Sangam Age was ……………..
(a) Mandalam
(b) Nadu
(c) Ur
(d) Pattinam
Answer:
(c) Ur

II. Read the Statement and tick the appropriate answer :

6th Social Science Guide Question 2.
Which of the following statements are not true?
(b) The Pathitrupathu provides information about Chera Kings.
(c) The earliest literature of the Sangam age was written mostly in the form of prose,
(a) 1 only
(b) 1 and 3 only
(c) 2 only
Answer:
(b) 1 and 3 only

VI. Answer in one or two sentence

Question 2.
What was Natukkal or Virakkal?
Answer:
In anciant Tamizhagam, the stones erected to commemorate the heroes who died in the battle field are called Natukal (Veerakkal)

Question 1.
Discuss the status of women in the Sangam Society.
Answer:

Question 2.
The period of Kalabhra is not a dark age. Give reasons.
Answer:

So the Kalabhra Period is not a dark age.

IX. Map Work :
Question 1.
Mark and colour the extent of Chera, Chola and Pandya empires on the river map of South India. 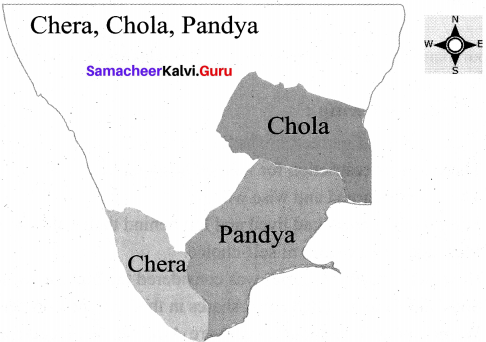 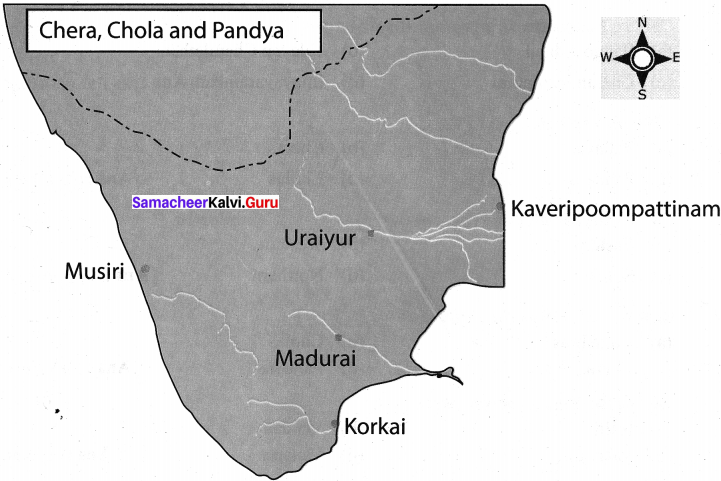 Question 5.
One of the Seven patrons were
(a) Nalli
(b) Vendan
(c) Valavan
(d) Vanaran
Answer:
(a) Nalli

Question 8.
Paddy and Sugarcane were produced in .
(a) Marutham
(b) Neithal
(c) Palai
(d) Mullai
Answer:
(a) Marutham

Question 9.
Yapernkalam was one of the liter a sources of the
(a) Pandyas
(b) Pallavas
(c) Kalabhras
(d) Cholas
Answer:
(c) Kalabhras

II. Read the Statement and tick the appropriate answer :

Question 2.
Which of the following statement is / are not true.
a. Tholkappiam is a work on Tamil grammar.
b. Perunarkilli was a prominent Chera ruler.
c. Sembiyan was a title assumed by the Cholas.
d. Madurai was the capital of the Cholas.

Question 3.
Which of the following statement is / are true?.
a. Nanmaran was praised as the lord of Korkai.
b. Paddaikottil was a place where weapons were kept.
c. Women had many restrictions in social life during Sangam age.
d. Koothu means folk drama.

Question 4
Match the following dynasties with the garlands they signified.
a. Chera – i. Margosa.
b. Chola – ii. Fig
c. Pandya – iii. Palmyra

Question 1.
Mention the boundary of Tamizhagam.
Answer:
Tamizhagam started from Vengadam (Tirupathi hill) in the north to Kanyakumari (Cape comorin) in the south, bounded by sea on the east and the west.

Question 2.
What were the Festivals and Entertainments in the sangam period?
Answer:
Festivals:

Question 3.
Where did the Cheras rule?
Answer:
The Cheras ruled over the central and north Travancore, Cochin, South Malabar and Kongu region of TamilNadu.

Question 5.
Why was Kallanai built?
Answer:

Question 6.
Why is Nedunchezhian hailed on the most popular warrior?
Answer:

Question 7.
What were the Symbols of royal used during the Sangam period?
Answer:
Kol, Murasu and Venkudai were used as the symbols of the royal authority.

Question 8.
What were the prominent weapons used during the Sangam period?
Answer:

Question 10.
What were the festivals celebrated by the people of the Sangam Age?
Answer:

Question 11.
What were the two kinds of markets or bazaars in Puhar and Madurai ?
Answer:

Write about the sources of the Sangam Age.
Answer:
(i) Inscriptions – Hathigumpha Inscription of King Karavela ofKalinga, Pugalur (near Karur) Inscription, Ashokan Edicts II and XIII, and
inscriptions found at Mangulam, Alagarmalai and Ki lavalavu (all near Madurai).

(iii) Coins – Issued by the Cheras, Cholas, Pandyas and the chieftains of Sangam Age as well as the Roman coins.

Question 2.
Write about the Kingship under the Sangam polity.
Answer:

Question 3.
Write a note on a) Arts and b) Occupation during Sangam age.
Answer:
Arts: