II. Match the statement with the reason. Tick the appropriate answer:

III. Find out the Right pair:

IV. Fill in the blanks

VI. Answer In one word :

6th Standard Samacheer Kalvi Social Science Question 1.
What method is used to find out the age of the excavated materials?
Answer:
Radiocarbon dating.

Samacheer Kalvi 6th Social Science Question 3.
Where did early humans live?
Answer:
They lived on the branches of tress, in caves and mountain ranges.

Samacheer Kalvi 6th Social Book Question 1.
What is evolution?
Answer:
Evolution is the process through which the humankind changes and develops towards an advanced stage of life.

Samacheer Kalvi 6th Social Guide Question 3.
Why did humans move from place to place?
Answer:
Humans kept on moving in search of food.

Samacheerkalvi.Guru 6th Social Question 5.
Why were axes made?
Answer:
The axes were made to cut trees, remove barks, dig pits, hunt animals and remove the skin of animals.

Samacheer Kalvi Social Science 6th Question 7.
What do you know about anthropology?
Answer:
Anthropology is the study of humans and evolutionary history. 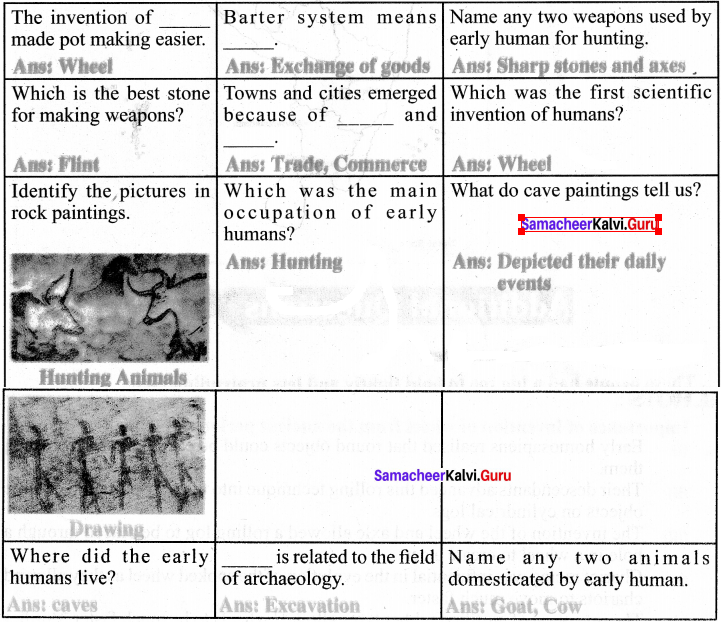 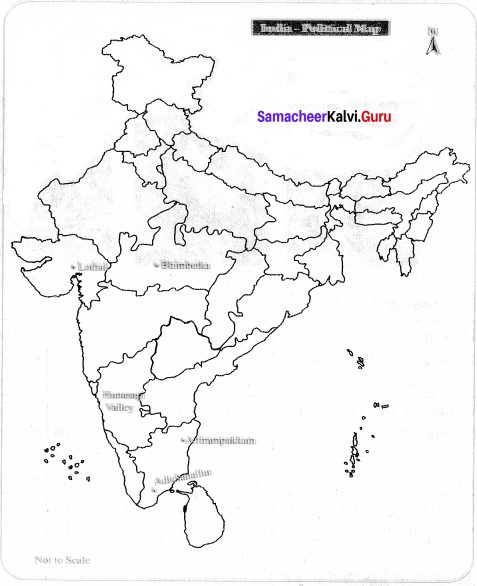 I. Choose the correct Answer:

II. Match the Statement with the Reason. Tick the appropriate answer:

Question 4.
Find out the wrong pair.

Question 1.
These people have unearthed the footprints of humans in a country called Tanzania.
Answer:
Anthropologists.

Question 2.
He is a Java man who lived approximately 1.8 million years ago.
Answer:
Homo erectus.

Question 3.
He had a mix of human and ape traits with bipedal walk.
Answer:
Australopithecus.

Question 4.
Keeping a stone with bottom and sharpening it with another stone.
Answer:
Art of Flaking.

Question 5.
This helped humans to protect them from predators.
Answer:
Fire.

Question 2.
What Is attempted by Anthropologists?
Answer:
Anthropologists attempt by investigating the whole range of human development and behaviour to achieve a total description of cultural and social phenomena.

Question 3.
Explain the hunting and food gathering stage of our ancestors.
Answer:

1.Our ancestors lived in groups, leading nomadic life. They kept on moving in search of food.

2.They hunted pig, dear, bison, rhino, elephant and bear for food. They also scavenged the animals killed by other wild animals like tiger.

3.They learnt the art of fishing. They collected honey and grains. Once the food resource got exhausted in one area, they moved to another place in search of food

Question 4.
How did man make me of file?
Answer:
Humans used flint stone to make fire and used it to protect them from predators, for cooking food and for creating light during night. Thus fire became important for man in olden times.

Question 5.
What was the role played by humans in pot making?
Answer: