I. Choose the appropriate answer.

Samacheer Kalvi Science Question 4.
In which among the following circuits does the bulb glow? 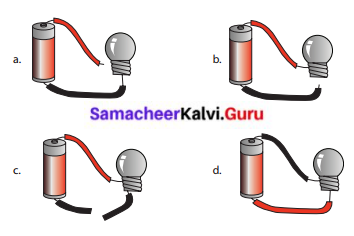 III. True or False. If False, give the correct statement.

Samacheer Kalvi 6th Science Book Back Answers Question 1.
In a parallel circuit, the electricity has more than one path.
Answer:
True 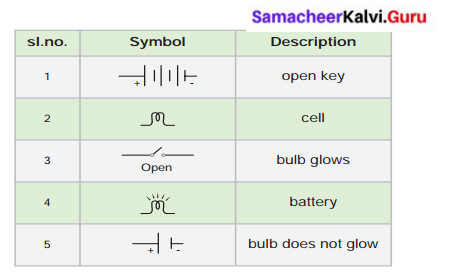 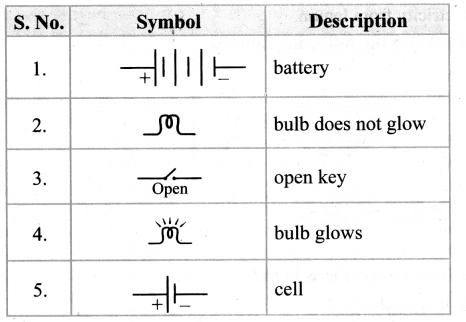 Samacheer Kalvi 6th Guide Science Question 1.
In the given circuit diagram, which of the given switch(s) should be closed, So that only the bulb A glows. 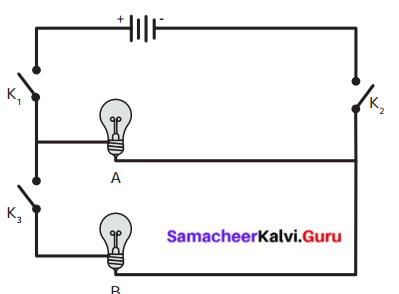 Answer:
Switches K1 and K2 should be closed.

Answer:
The conductor is Iron chain.

6th Standard Science Samacheer Kalvi Question 5.
What type of circuit is there in a torchlight?
Answer:
Simple circuit system is used in a torchlight.

Question 2.
Can the cell used in the clock gives us an electric shock? Justify your answer.
Answer:

Question 2.
Tabulate the different components of an electric circuit and their respective symbols.
Answer: 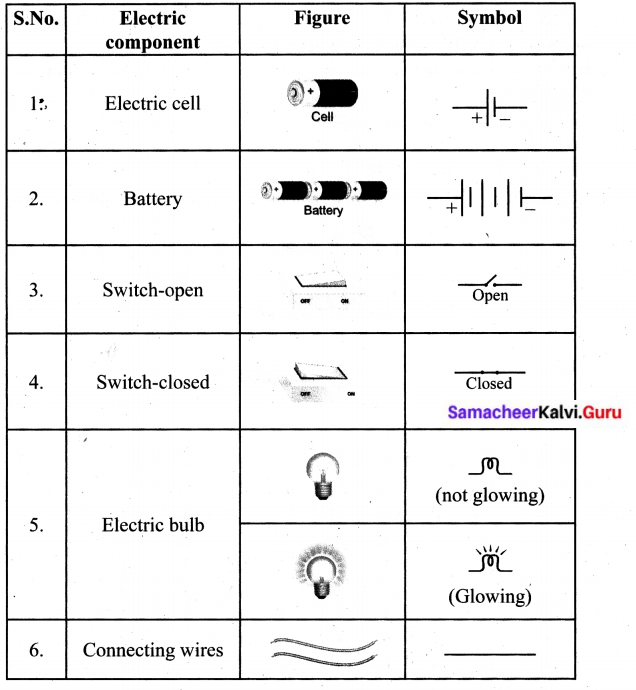 Question 3.
Write short notes on conductors and insulators.
Answer:
Conductors:
The rate of flow of electric charges in a circuit is called electric current. The materials which allow electric charges to pass through them are called conductors.
Examples: Copper, iron, aluminum, impure water, earth etc.,

Iniulaton (Non-Conductors):
The materials which do not allow electric charges to pass through them are called insulators or non- conductors. Examples: plastic, glass, wood, rubber, china clay, ebonite etc.

Question 1.
Rahul wants to make an electric circuit. He has a bulb, two wires, a safety pin and a piece of copper. He does not have any electric cell or battery. Suddenly he gets some idea. He uses a lemon instead of a battery and makes a circuit. Will the bulb glow?
Answer:
Yes the bulb will glow:

X. Search ten words in the given word grid and classify them as conductors and insulators. 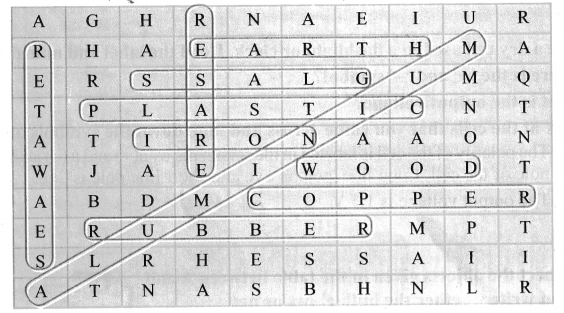 Question 1.
List out the electrical appliances used in your home.
Answer: 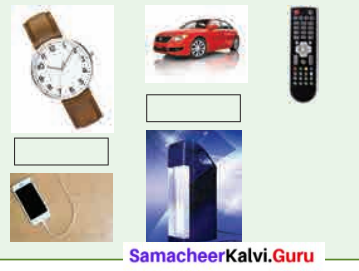 Question 1.
Take a dry cell used in a flashlight or clock. Read the label and note the following.
1. Where is the ‘+’ and ‘-’ symbol?
2. What is the output voltage?
Look at the cells that you come across and note down the symbols and voltage.
Answer:
1. The polarity of the cell is labeled in the schematic by a (+) and a (-) at the appropriate pole of the cell. Long line pole is +ve and short line pole is -ve.
2. The output voltage is 1.5 V.

Question 1.
Connect the objects given in the table between A and B and write whether the bulb glows or not. 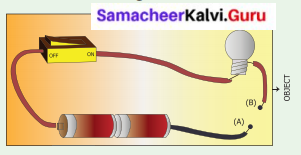 Question 1.
Shall we make our own Battery
Produce electricity using copper plates, zinc plate, connecting wires, key, beaker and porridge (rice water) [the older the porridge the better will be the current| Arrange copper and zinc plates in series as shown in the figure. Half till two beakers with porridge. Connect the copper plate with the positive of and LED bulb and zinc to the negative. Observe what happens.
Now you can replace porridge with curd, potato, lemon etc. 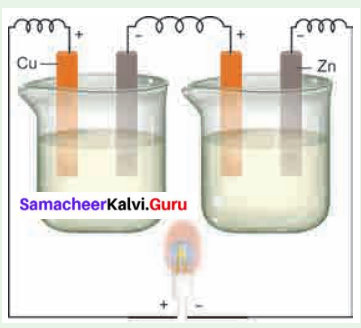 Question 5.
________ is an instrument used in electric circuits to find the quantity of current flowing through the circuit.
(a) Volt meter
(b) Ammeter
(c) Cell
(d) Key
Answer:
(b) Aniniele

III. Find whether the following sentences are true or false. If false Correct the statement.

Question 5.
In a circuit if the key is in open (off) condition, then electricity will not flow.
Answer:
True.

Question 6.
Ebonite do not allow electric charges to pass through them.
Answer:
True.

V. Match the following :
A.

Question 1.
How many cells are required to make a battery?
Answer:

Question 2.
Where are the Hydel power stations located in Tamil Nadu?
Answer:

Question 3.
Where are Windmills located in Tamil Nadu?
Answer:

Question 4.
What are the types of electric circuits?
Answer:

Question 1.
Describe open circuit and closed circuits with diagram.
Answer:
(i) Open Circuit:
In a circuit if the key is in open (off) condition, then electricity will not flow and the circuit is called an open circuit. The bulb will not glow in this circuit. 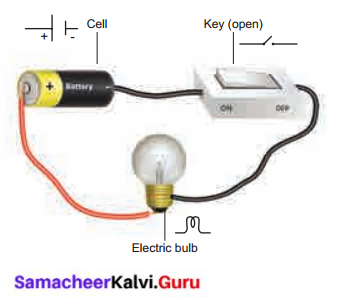 (ii) Closed Circuit
In a circuit if the key is in closed (on) condition, then electricity will flow and the circuit is called a closed circuit. The bulb will glow in this circuit. 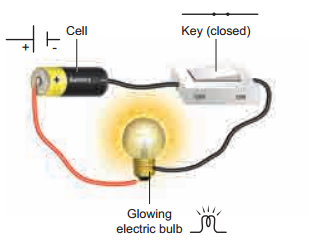 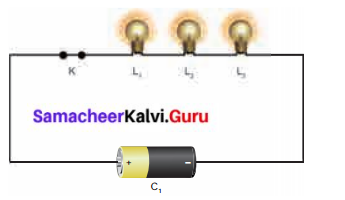 If two or more bulbs are connected in series in a circuit, then that type of circuit is called series circuit. if any one of the bulbs is damaged or disconnected, the entire circuit will not work. 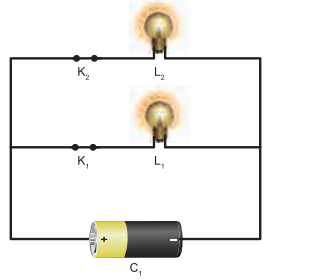 If two or more bulbs are connected in parallel in a circuit, then that type of circuit is called parallel circuit. If any one of the bulb ¡s damaged or disconnected, the other part of the circuit will work. So parallel circuits are used in homes.

Question 3.
What are the safety measures to safeguard a person from electric shock?
Answer: