Guys who are planning to learn and understand the topics of 10th Social Science History can grab this Tamilnadu State board solutions for Chapter 1 Outbreak of World War I and Its Aftermath Questions and Answers from this page for free of cost. Make sure you use them as reference material at the time of preparation & score good grades in the final exams.

Students who feel tough to learn concepts can take help from this Samacheer Kalvi 10th Social Science Book Solutions Guide Pdf, all the Questions and Answers can easily refer in the exams. Go to the below sections and get 10th Social Science History Chapter 1 Outbreak of World War I and Its Aftermath Tamilnadu State Board Solutions PDF.

Outbreak of World War I and Its Aftermath Textual Exercise

Outbreak Of World War 1 And Its Aftermath Question 2.
Where did the Ethiopian army defeat the Italian army?
(a) Delville
(b) Orange State
(c) Adowa
(d) Algiers
Answer:
(c) Adowa

10th Social History 1st Lesson Question 3.
Which country emerged as the strongest in East Asia towards the close of nineteenth century?
(a) China
(b) Japan
(c) Korea
(d) Mongolia
Answer:
(b) Japan

Outbreak Of World War I And Its Aftermath Question 6.
Which country after World War I took to a policy of isolation?
(a) Britain
(b) France
(c) Germany
(d) USA
Answer:
(d) USA

Outbreak Of World War 1 And Its Aftermath In Tamil Question 7.
To which country did the first Secretary-General of League of Nations belong?
(a) Britain
(b) France
(c) Dutch
(d) USA
Answer:
(a) Britain

10th History Timeline Chart In English Question 8.
Which country was expelled from the League of Nations for attacking Finland?
(a) Germany
(b) Russia
(c) Italy
(d) France
Answer:
(b) Russia

10th Social 1st Lesson Question Answer Question 1.
(i) Italy remained a neutral country when the World War broke out.
(ii) Italy was much disappointed over the peace settlement at Versailles.
(iii) The Treaty of Sevres was signed with Italy.
(iv) Italy was denied even small places such as Trieste, Istria and the south Tyrol.
(a) (i) and (ii) are correct
(b) (iii) is correct
(c) (iv) is correct
(d) (i), (iii) and (iv) are correct
Answer:
(a) (i) and (ii) are correct

Class 10 Social Science History Chapter 1 Questions And Answers Question 2.
Name the countries in the Triple Entente.
Answer:
The countries of Triple-Entente were Britain, France and Russia.

Question 4.
What do you know of trench warfare?
Answer:
Trenches or ditches dug by troops enabled soldiers to safely stand and protect themselves from enemy fire. During the first world war the battle of Mame (between French and Germans) is a memorable one for trench warfare.

Question 5.
What was the role of Mustafa Kemal Pasha?
Answer:
It was Mustafa Kemal Pasha whose efforts caused Turkey’s rebirth as a nation. Not only did Kemal Pasha win freedom for the country but he modernised it and changed it out of all recognition. He put an end to the Sultanate and the Caliphate.

(b) How did Japan emerge as an imperial power?
Answer:
Japan took to Western education and machinery with a modem army and navy had emerged as an advanced industrialised power. It also followed the imperialistic aggression policy of the European powers faithfully. It surprised the world by giving a crashing defeat to China in the Sino-Japanese War during the period of 1894-95. Japan also defeated Russia in Russo-Japanese War in 1904 and got back Port Arthur from it. In this way it emerged as an imperial power.

Question 2.
German Emperor
(a) What was the nature of Emperor Kaiser Wilhelm II of Germany?
(b) What was the violent form of Germany called?
(c) Why did Kaiser Wilhelm intervene in the Morocco affair?
(d) What happened to Germany’s colonies in Africa?
Answer:
(a) He was ruthlessly assertive and aggressive. He proclaimed that Germany would be the leader of the world.
(b) The violent form of Germany is called Kultur.
(c) The British agreement with France to occupy Morocco was not consented by Germany.
(d) The colonies of Germany in Africa were attacked by the allies and therefore had to surrender to them.

(а) Why was Balkan League formed?
Answer:
Balkan League was formed to attack and defeat Turkish forces in the first Balkan War in 1912-13.

(b) What was the outcome of the first Balkan War?
Answer:
The new state of Albania was created and the other Balkan states divided up Macedonia , between them. Turkey was reduced the area around Constantinople.

Question 2.
Highlight the provisions of the Treaty of Versailles relating to Germany.
Answer:

Question 3.
Explain the course of the Russian Revolution under the leadership of Lenin.
Answer:

Question 1.
Students can be taught to mark the places of battles and the capital cities of the countries that were engaged in the War. 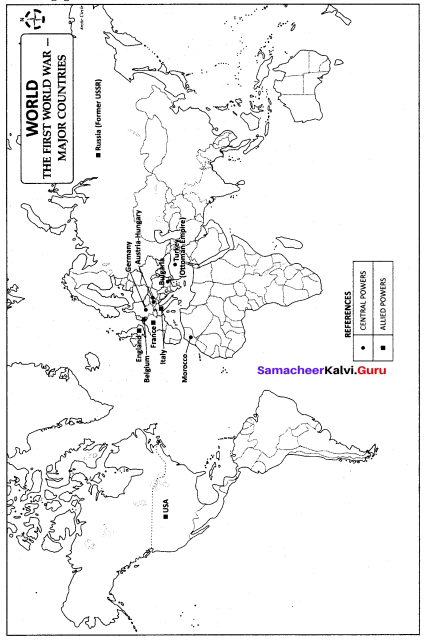 Question 2.
An assignment or a project work on the role of Indian soldiers in different battle fields across the globe and the casualties they suffered during the War be attempted by the students.
Answer:
British Indian Army: A Military department was created within the government of the East India company at Kolkata in the year 1776.
The British Indian Army was a critical force for the primacy of the British empire both in India and across the world.

First Kashmir war (1947): Tensions between Indian and Pakistan largely over Kashmir have never been entirely eliminated.

Sino-Indian conflict (1967): Conflict between Indian troops and members of the Chinese People’s Liberation Army on 1st Oct 1967. Indian losses were 88 killed and 163 wounded.

Kargil war (1999): The war broke out at the Himalayan heights in the Kargil district of India. There was heavy casualties in India.

UN peace keeping mission: In 2014, India is the third largest troop contributor with 7,860 personnel deployed. Nearly 157 Indians have been killed during such operations. The Indian army provided paramedical units to help the sick and the wounded.

Mark the following countries on the world map. 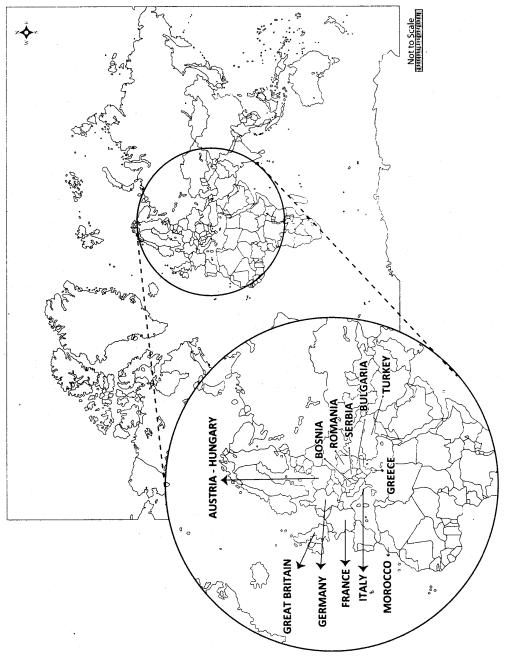 Outbreak of World War I and Its Aftermath Additional Questions

Question 1.
……. was in competition with Germany and United States.
(a) Japan
(b) England
(c) Africa
Answer:
(b) England

Question 2.
The outcome of the first world war is the:
(a) French
(b) Russian
(c) American
(d) None of the above
Answer:
(b) Russian

Question 7.
The term ………. denotes control or rule by a country over the Political and Economical life of another country.
(a) Imperialism
(b) Capitalism
(c) Socialism
Answer:
(a) Imperialism

Question 3.
Industrial Revolution is an important cause for the rise of Imperialism – Explain it.
Answer:

Question 4.
Write a note on Balkan League.
Answer:
Balkan is a region in South-eastern Europe between the Mediterranean sea and the Black sea.

Turkey extended her empire over the Balkans. Taking advantage of the political instability of the Turkish empire, Greece, Serbia, Bulgaria and later Montenegro tried control over it and formed the Balkan League in March 1912.

Question 6.
What do you mean by Pravada.
Answer:
Pravada is a Russian word meaning ‘Truth’. It was the official newspaper of the communist party of the soviet union from 1918 to 1991.

Question 7.
Why did America enter into First World War?
Answer:

Question 10.
Write any two incidents of violations by the member countries of the League.
Answer:

Question 12.
Who led the procession of workers to the event “Bloody Sunday” in Russia?
Answer:
Father Gapon

Question 13.
Write a note on Trusts and Cartels.
Answer:

Question 1.
Causes for the rise of Imperialism

(b) What was the “White man’s burden”?
Answer:
To civilise the backward and uncivilised native people of Africa and Asia.

(d) What promoted the spirit of imperialism?
Answer:
The discovery of new routes to African and Asian continents.

(a) Which incident of Japan surprised the whole world?
Answer:
The crushing defeat of China by little Japan in the Sino-Japanese war of (1894-95) surprised the world.

(b) Why did Japan entered an alliance with England?
Answer:
Japan developed hostile towards Russia because Franch was the ally of Russia. Therefore, it entered into an alliance with Britain.

(c) Why did the other Balkan countries declare war on Bulgaria?
Answer:
Dispute arose between Serbia and Bulgaria in sharing the spoils of the war.

(d) What was the result of the Second Balkan war?
Answer:
Bulgaria was defeated and Serbia gained more territories.

(a) What was the attitude developed with the growth of Nationalism?
Answer:
The attitude of “ My country right or wrong, I support it” developed.

(c) Why did hatred developed towards other countries?
Answer:
The love for one country demanded hatred for another country.

(d) What did the newspapers do?
Answer:
Newspapers whipped up nationalist feelings by twisting the situation obtained in other countries.

Question 5.
War in the Near East front

(b) Why was it considered a terrible blow?
Answer:
Because communications between Russia and the Allies were cut off.

(c) Why did Britain wanted to capture Gallipoli Peninsula?
Answer:
To control the Dardanelles and to capture Constantinople.

(d) What was the result of Dardanelles expedition?
Answer:
It was an utter failure to Britain.

(b) Who helped in its formation?
Answer:
President ofU.S.A Woodrow Wilson.

(c) What was the structure of the League?
Answer:
The League consisted of Assembly,, the council, the Secretariat, Court of Justice and the International Labour organization.

(d) What were the privileges Enjoyed by the member countries?
Answer:
Each member had one vote and even the small nations possessed the right of Veto (The vote that blocks a decision).

(a) Name the organisations which were found before the League of Nation.
Answer:

Question 1.
What were the effects of Imperialism?
Answer:
Positive effects:

The Treaty of Versailles:

Question 2.
What were the criticisms raised against the peace settlement?
Answer: 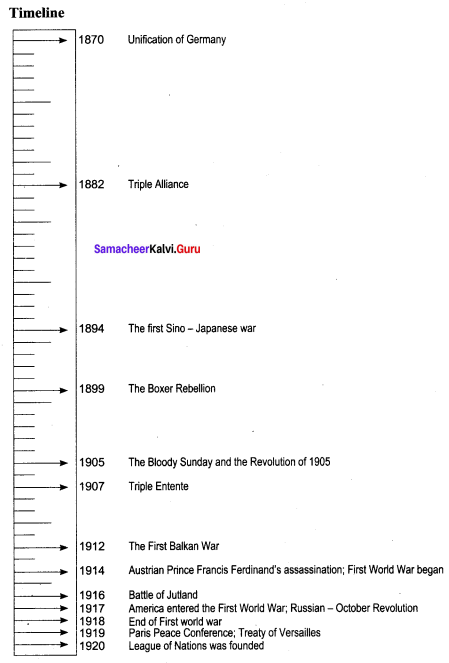 We think the data given here clarify all your queries of Chapter 1 and make you feel confident to attempt all questions in the examination. So, practice more & more from Tamilnadu State Board solutions for 10th Social Science History Chapter 1 Outbreak of World War I and Its Aftermath Questions and Answers & score well. Need any information regarding this then ask us through comments & we’ll give the best possible answers very soon.