Guys who are planning to learn and understand the topics of 10th Social Science History can grab this Tamilnadu State board solutions for Chapter 8 Nationalism: Gandhian Phase Questions and Answers from this page for free of cost. Make sure you use them as reference material at the time of preparation & score good grades in the final exams.

Students who feel tough to learn concepts can take help from this Samacheer Kalvi 10th Social Science Book Solutions Guide Pdf, all the Questions and Answers can easily refer in the exams. Go to the below sections and get 10th Social Science History Chapter 8 Nationalism: Gandhian Phase Tamilnadu State Board Solutions PDF.

Question 2.
In which session of the Indian National Congress was Non-Cooperation approved?
(a) Bombay
(b) Madras
(c) Lucknow
(d) Nagpur
Answer:
(d) Nagpur

Question 2.
Write a note on the Khilafat Movement.
Answer:
After World War I, the Caliph of Turkey, who was considered the head of Muslims all over the world, was given a very harsh treatment. The Khilafat Movement started in support of the Caliph. It was led by Maulana Mohamed Ali and Maulana Shaukat Ali, popularly known as the Ali brothers. It aimed to restore the prestige and power of the Caliphate. Mahatma Gandhi supported the movement and saw it an opportunity to unite the Hindus and the Muslims.

Question 3.
Why did Gandhi withdraw the Non-Cooperation Movement?
Answer:
On February 5th 1922 a mass procession was took over by the nationalists and the peasants.

Question 4.
What was the conflict between the Swarajists and no-changers?
Answer:
In due course of time the Congress got divided into two groups—pro-changers (swarajists) and no-changers. Some of the Congressmen led by Motilal Nehru and C. R. Das wanted to contest the elections and enter the legislature. They argued that the national interest could be promoted by working in the Legislative Councils under Dyarchy and weakening the colonial government from within. These Congressmen were called the pro-changers. On the other hand, no-changers like Vallabhbhai Patel, C Rajagopalachari and other followers of Gandhi wanted to continue non-cooperation with the government.

Question 5.
Why was Simon Commission boycotted?
Answer:
On 8 December 1927, the British Government announced Indian statutory commission to super-wise and bring changes in the functioning of the Government in India, (to review the working of the Government of India Act of 1919 and to further suggest reforms in the administration)

Question 6.
What is Poorna Swaraj?
Answer:
Some of the Congressmen were not satisfied with dominion status of India and wanted to demand complete independence. In the Congress Session held in Lahore in December 1929 with Jawaharlal Nehru as the President, Poorna Swaraj was declared as the goal. Subsequently, 26 January 1930 was declared as the Independence Day and a pledge was taken all over the country to attain Poorna Swaraj without using any kind of violence.

(ii) Reserved seats for the depressed classes were increased from 71 to 147. In the Central Legislature 18 per cent of the seats were reserved.

(a) Which incident is considered a turning point in the life of Gandhi?
Answer:
The racial discrimination Gandhi had personally in South Africa was a turning point.

(b) Name the works that influenced Gandhi?
Answer:
He was deeply influenced by the works of Tolstoy “The Kingdom of God is within you” Ruskins ‘Unto this last’ and Thoreau’s ‘Civil Disobedience’.

(c) How did Gandhi use satyagraha as a strategy in South Africa?
Answer:
Gandhiji used the strategy of Satyagraha for fighting the issues of immigration and racial discrimination.

(d) What is the contribution of Gandhi towards abolition of untouchability?
Answer:
Gandhiji wanted to abolish untouchability from the country. He undertook an all-India tour called the Harijan Tour. He started the Harijan Sevak Sangh to work for the removal of discriminations. He worked to promote education, cleanliness and hygiene and giving up of liquor among the depressed class. He also launched the Temple Entry Movement.

Question 1.
Examine the factors that led to the transformation of Gandhi into a mass leader.
Answer:

Question 2.
Critically examine the Civil Disobedience Movement as the typical example of Gandhian movement.
Answer:
Programmes such as no-base campaigns caught the imagination of the peasants. Gandhi announced a no-tax campaign in Bardoli in February 1922. These movements greatly enhanced Gandhi’s reputation as a national leader, especially the peasants. Gandhi made a nation-wide tour. Wherever he visited there was a bonfire of foreign clothes. Thousands left government jobs, students gave up their studies in large numbers and the lawyers gave up thriving practices. Boycott of British goods and institutions were effective.

The boycott of the Prince of Wales’ visit to India was successful. During this boycott trade unions and workers participated actively. However, Gandhi suddenly withdrew the movement because of the Chauri Chaura incident. On 5 February 1922 a procession of the nationalists in Chauri Chaura, a village near Gorakhpur in present-day Uttar Pradesh provoked by the police turned violent. The mob burnt the police station 22 policemen lost their lives. Gandhi immediately withdrew the movement. Gandhi was arrested and was released only in 1924.

Question 3.
Discuss the reasons behind the partition of India.
Answer:

Question 1.
Students can be asked to mark the important places of Gandhian Movement in a map and write a sentence or two about what happened there. 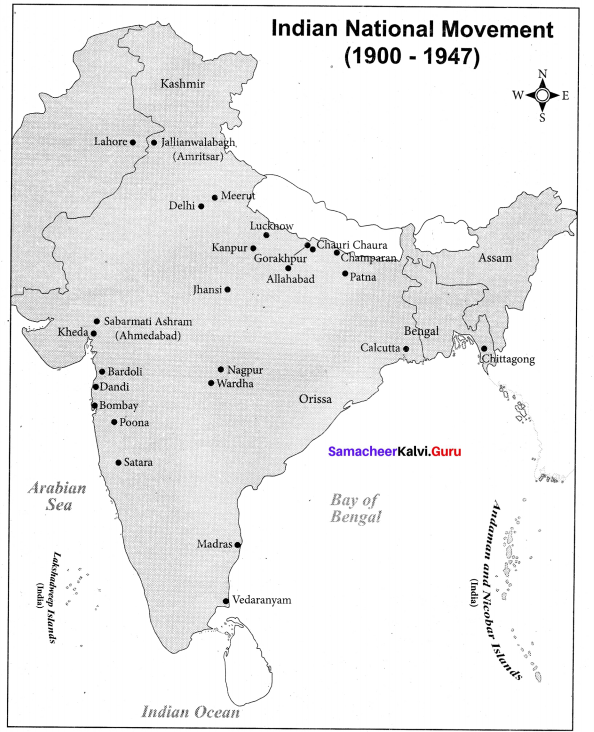 Question 2.
Students can be divided into groups and asked to debate the views of Gandhi, Jinnah, B.R. Ambedkar, Revolutionaries and Communists.
Answer:
Do it yourself.

Question 3.
The religious and social reformers prepared the ground for the rise of …………..
(a) Nationalism
(b) Revolution
(c) Mutiny
Answer:
(a) Nationalism

Question 6.
Towards the end of 19th ……………… century synthetic dyes had forced indigo out of the market.
(a) British
(b) Chinese
(c) German
(d) French
Answer:
(c) German

Question 10.
Khilafat movement came to an end with the abolition of caliphate in:
(a) Isreal
(b) Arabia
(c) Turkey
(d) India
Answer:
(c) Turkey

Question 16.
To form the interim Government Nehru sought the help of ……………
(a) Abdul Kalam Azad
(b) Jinnah
(c) Salimullah Khan
Answer:
(b) Jinnah

Question 20.
The Khilafat Committee meeting was held in ………….
(a) Lucknow
(b) Allahabad
(c) Amritsar
(d) Kanpur
Answer:
(b) Allahabad

Question 1.
Write a brief note on Gandhi’s early life.
Answer:
Mohandas Karam Chand Gandhi was bom in a well to do family on 2nd October 1869 at Porbandar.

Question 2.
Name some of the important moderate leaders.
Answer:

Question 3.
What influenced Gandhi to get trained in the path of Satyagraha?
Answer:

Pro – Changers: The congressmen led by Mothilal Nehru and C.R Das wanted to contest the elections and enter the legislature.

They had the notion that national interest could be promoted by working in the legislative councils under Dyarchy and wreck the colonial Government within.

They effectively used the legislature as a platform for propagation of nationalist ideas.

No. Changers: Staunch followers of Gandhi like Vallabhbhai Patel. C. Rajaji and others who wanted to continue non – cooperation with the Government.

Question 8.
Write about Swaraj party.
Answer:
(i) In order to lead the national movement a section of the nationalist leaders like C.R. Das and Motilal Nehru formed the Swaraj party in 1923.

(ii) Instead of boycotting the Assemblies there leaders wanted to oppose the British Government from within the legislature.

(iii) It passed the resolution demanding the establishment of a responsible Government in India,

(iv) After the death of C. R. Das the Swaraj party was dissolved.

Question 9.
Who were the members of the Cabinet Mission?
Answer:

Question 10.
Explain the Communal Award and Poona Pact of 1932.
Answer:

Question 11.
How India was partitioned?
Answer:

Question 14.
The Non-cooperation Movement got nation-wide support. Support the statement with valid points.
Answer:
The Non-cooperation Movement was supported by the people of all sections. They boycotted foreign goods and spread the doctrine of Swadeshi. Thousands left government jobs, students gave up their studies in large numbers and the lawyers gave up thriving practices. They also boycotted the Prince of Wales’ visit to India. The trade unions and workers also participated actively.

Question 15.
What were the recommendations of the Nehru Report?
Answer:

VI. Answer all the questions given under each caption:

Question 1.
Factors leading to the rise of National Movement
(a) How did the national leaders inspire the people?
Answer:
They inspired the people with the ideas of self-respect and self-confidence.

(d) What Gandhi did to stop the atrocities done by the British Government?
Answer:
Gandhi commenced a twenty one day fast in February 1943 which nearly threatened his life.

(b) What did Tilak declare?
Answer:
Tilak declared, “Swaraj is my birth right and I shall have it”.

(d) What was the desire of the militant nationalists?
Answer:
The Militant Nationalists desired to change the aim of the congress and the means to attain it.

(c) What was big blow to the imperial power?
Answer:
British surrender in South – East Asia to the Japanese was a big blow to imperial prestige.

(d) What was the effect of this revolt?
Answer:
All political leaders were released and ban on congress was lifted.

(c) What was Mount Batten Plan?
Answer:
India would be divided into two independent countries namely Indian Union and the Pakistan Union.

(b) What was the League’s argument?
Answer:
The League argued it was to be the sole representative of the Muslims and so withdrew its approval.

(c) What changes came with the enactment of the Act?
Answer:
The Act abolished the sovereignty of the British Parliament over India. India was partitioned into two dominions—India and Pakistan.

Question 1.
Narrate how the tribal groups were affected by the Forest Acts enacted by the British? Who attained martyrdom for the cause of forest dwellers?
Answer:

Gandhi’s memorable speech:
I am not going to be satisfied with anything short of complete freedom. We shall do or die. We shall either free India or die in the attempt.
Results:

Question 4.
Throw light on the Round Table Conferences. How did they disappoint the Congress leaders?
Answer:
The First Round Table Conference was held at London in November 1930 in the midst of the Civil Disobedience Movement. Ramsay MacDonald, the British Prime Minister, proposed a federal government with provincial autonomy. There was a deadlock over the question of separate electorates for the minorities. The Congress did not attend this conference as all its leaders were in jail. So, the conference closed without any result. It was clear that without
‘ Congress participation the discussions were of no value. Gandhiji was released from the jail unconditionally.

The Viceroy Lord Irwin held talks with Gandhiji on 5 March 1931. The British agreed to the demand of immediate release of all political prisoners not involved in violence, return of confiscated land and lenient treatment of the government employees who had resigned. It also permitted the people of coastal villages to make salt and non-violent picketing. The Congress agreed to suspend the Civil Disobedience Movement and attend the Second Round Table Conference. Gandhiji attended this conference which began on 7 September 1931 but refused to accept separate electorates for the minorities. As a result, the second conference also failed.

On returning to India on 28th December 1931, Gandhiji revived the Civil Disobedience Movement. This time the government was prepared to meet the resistance. So, it enforced martial law and arrested Gandhiji on 4th January 1932. Soon all the Congress leaders were also arrested. Protests and picketing by people were suppressed with force. The national st press was completely banned. In the meantime, the Third Round Table Conference was he id from 17 November to 24 December 1932. The Congress did not participate in the confers ce as it had revived the Civil Disobedience Movement.
IMPORTANT EVENTS AND YEARS:

We think the data given here clarify all your queries of Chapter 8 and make you feel confident to attempt all questions in the examination. So, practice more & more from Tamilnadu State Board solutions for 10th Social Science History Chapter 8 Nationalism: Gandhian Phase Questions and Answers & score well. Need any information regarding this then ask us through comments & we’ll give the best possible answers very soon.