Social Science Class 9 Chapter 1 Man And Environment Question 4.
The extraction of valuable minerals and other geological minerals from the mines, is …..
(a) Fishing
(b) Lumbering
(c) Mining
(d) Agriculture
Answer:
(c) Mining

II. Consider the given statements and choose the right option given below.

IV. Answer the following in brief:

9th Social Samacheer Kalvi Question 2.
What is ‘black death’?
Answer:
The black death is estimated to have killed 30 – 60 percent of Europe’s total population during the 14th century. The dominant explanation for black death is attributed to the outbreak of plague.

9th Samacheer Kalvi Social Science Question 4.
What is Green House effect?
Answer:
Global warming is caused by the increase of green house gases such as carbondioxide, methane, water vapour and Chloro Fluoro Carbons(CFC), carbon monoxide, photo chemical oxidants and hydrocarbons, which are responsible for the heat retention ability of the atmosphere. Global warming causes climatic change, ozone layer depletion, rise in sea level and drowning of coastal inhabited land, melting of ice, etc., They are posing an even greater threat to human existence and so, man must start thinking of protecting the environment from pollution.

Samacheer Kalvi Guru 9th Social Question 5.
Write any two ways of how the locals and the government restored Palk Bay. Restoration of Palk Bay
Answer:
Local communities, government and civic organisations all came together not just to conserve the remaining mangroves, but also to restore it.

VI. Give reasons for the following:

9th Standard Samacheer Kalvi Social Question 1.
Reforestation is encouraged throughout the world.
Answer:
Deforestation results in many effects like floods and droughts, loss of soil fertility, air pollution, extinction of species, global warming, spread of deserts, depletion of water resource, melting of ice caps and glaciers, rise in sea level and depletion of ozone layer. Therefore, reforestation is encouraged throughout the world in order to conserve our mother Earth.

9th Social Solutions Samacheer Kalvi Question 2.
Acid rain destroys the ecosystem.
Answer:
When pollutants combine with water vapour in the presence of sunlight and oxygen, they form dilute sulphuric and nitric acids in the atmosphere. When this mixture precipitates from the atmosphere, it is called acid rain. This would cause lot of damages to life and property. It would affect the health of humans and animals, alter the constituents of water bodies, plants and trees may die as it deteriorates the soil quality and many more damages to nature.

Question 4.
Population growth has to be brought under control.
Answer:
Population growth leads to high competition for all available resources. It leads to poor quality of life, education, food supply, low income and so on. The resources of Earth may exhaust one day and would lead to the end of mankind.

Question 5.
Sustainable development growth has been set to protect the planet.
Answer:
The excessive usage of natural and manmade resources deplete its availability for the future generation. Hence conservation and awareness are the two important terms that can bring sustainability to our living: When we use the word sustainability to mean maintain, it means to maintain it forever. This is because our actions have a lasting effect on the environment and we should protect it for our future generations.

VII. Answer in a paragraph:

Question 1.
Explain the factors affecting the distribution of population.
Answer:
The world population is not uniformly distributed, owing to the following factors. 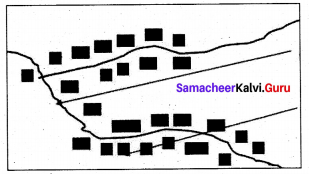 Linear pattern:
In a linear pattern, the houses are located along a road, railway line and along the edge of the river valley or along a levee. 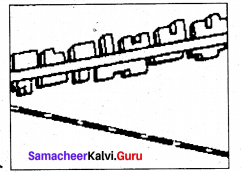 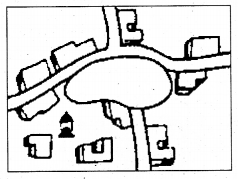 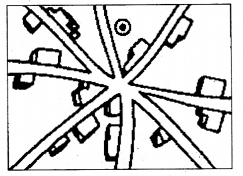 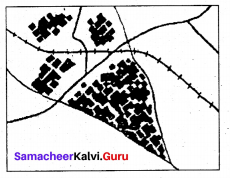 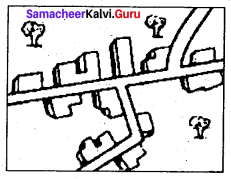 Nebular pattern:
The arrangement of roads is almost circular which ends at the central location or nucleus of the settlement around the house of the main landlord of the village or around a mosque, temple or church. 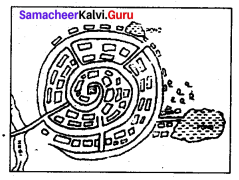 Question 1.
Study your area and write down about its settlement pattern.
Answer: 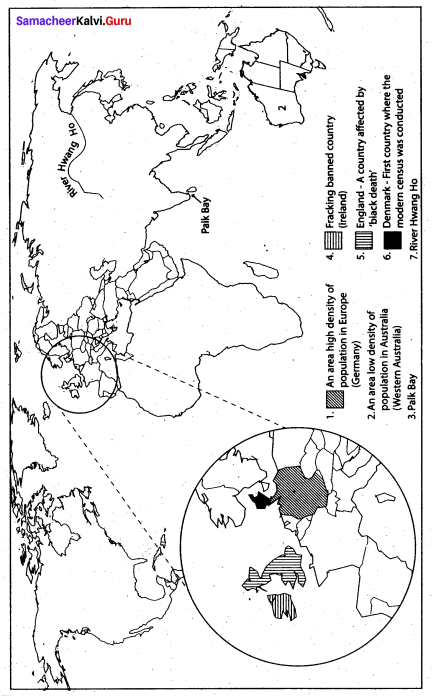 B. On the outline map of Tamil Nadu mark the following. 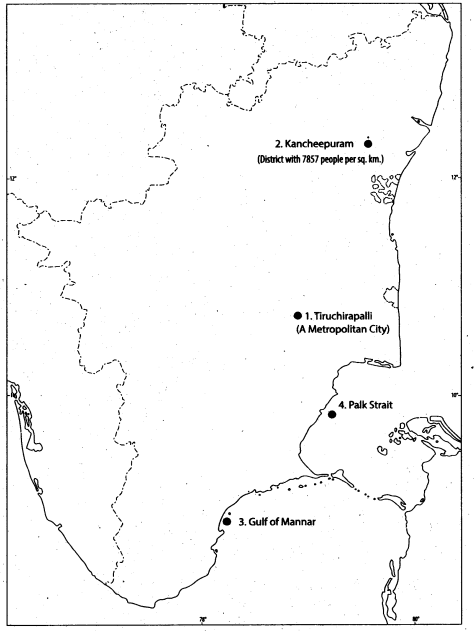 II. Consider the given statements and choose the right option given below:

IV. Fill in the blanks.
1. …….. is the statistical study of human population.
2. ……. is an official enumeration of population carried out periodically.
3. …… is a condition when a country has more people than its resources to sustain.
4. Cities with more than 50 lakh population are called ……..
5. ……… Activities pertain to the extraction of raw materials from the earth’s surface.
6. …….. is a poisonous gas made up of molecules consisting three oxygen atoms.
7. ……. refers to the process of increase in urban population and urban areas in a country.
8. The economic sustainability is successfully implemented through strong ………
Answers:
1. Demography
2. Census
3. Overpopulation
4. megacities
5. Primary
6. Ozone
7. Urbanisation
8. Public Distribution System

V. Answer the following in brief.

Question 1.
Define Environment.
Answer:
Environment is a set of relationships between man and nature. Man has survived through the ages, dwelling within his surrounding called the environment.

Question 2.
Write a short note on “Human Environment”.
Answer:
Human environment is defined as the interaction between man as an individual, with his family, occupation and society. It is also related to various cultural aspects such as education, religion, economics and politics.

Question 3.
What is Demography?
Answer:
In ancient Greek, ‘demos’ means people and ‘graphis’ means study Of measurement: So, ‘Demography’is the statistical study of human population.

Question 5.
What do you mean by Nebular pattern of road arrangement?
Answer:
The arrangement of roads is almost circular which ends at the central location or nucleus of the settlement around the house of the main landlord of the village or around a mosque, temple or church.

Question 9.
Classify wastes.
Answer:
Wastes can be classified into five types, which are commonly found around the house. These . include liquid waste, solid rubbish, organic waste, recyclable rubbish and hazardous waste like e-waste.

Question 1.
“It is easy to add but difficult to maintain.”
Answer:

Question 2.
“Human settlement can be described as any temporary (or) permanent unit area”.
Answer:

VIII. Answer in a paragraph.

Social Sustainability
The ability of a social system such as a country, family or organization to function at a defined level of social well being and harmony is called social sustainability. Problems like war, endemic poverty, widespread injustice and low education rates are symptoms of a system in socially unsustainable. The balancing capacity of a government in maintaining peaceful existence towards other countries and at the same time providing the requirements of its citizens without affecting the environment creates social sustainability.

Economic Sustainability
The people on earth consume far more than what is their fair share.