The Cat and the Pain-killer Warm Up:

There has always been a close bonding between children and animals. Studies have revealed that living with pet animals increases empathy, compassion and self-esteem among children.

The Cat And The Painkiller Summary Question 1.
Do you have a pet at home?
Answer:
Yes.

The Cat And The Painkiller Question 2.
If yes, what animal is it and what is its name?
Answer:
I have a puppy, and its name is Tommy.

The Cat And The Painkiller Book Back Answers Question 3.
Did you have any humourous moments with it? If yes, what was it?
Answer:
After work, my mum bought our dad a kebab for his tea-time. Hungry, dad just put the fork to his mouth when the doorbell went. The plate went down. By the time, my dad answered the doorbell and came back through the hall, Tommy had wiped off the plate and looked innocent. It was even funnier because of the way Tommy’s legs were moving faster than ever but they just slipped on the carpet in cartoon fashion.

The Cat And The Painkiller Pdf Question 4.
How do you care for your pets?
Answer:
I take my pet for a walk, give it food on time, play with it, and give it bath every weekend.

The Cat and the Pain-killer Textual Questions

A. Choose the most suitable option.

B. Identify the character or speaker of the following lines.

The Cat And The Pain Killer Additional Questions:

C. Based on your reading, rearrange the following sentences in the correct sequence.

1. Since all her methods failed, finally she gave him a pain-killer.
2. He told his aunt that Peter had no aunt, so he gave him the medicine.
3. The pain-killer triggered adverse reactions on Peter.
4. It jumped out of the open window.
5. Tom was dull and depressed.
6. This incident upset Aunt Polly and she questioned him.
7. But, Tom gave that pain-killer to the cat Peter.
8. So, Aunt Polly tried different types of remedies on him.
Answers:
3, 8, 5, 6,1, 7, 4, 2

3. The pain-killer triggered adverse reactions on Peter.
8. So, Aunt Polly tried different types of remedies on him.
5. Tom was dull and depressed.
6. This incident upset Aunt Polly and she questioned him.
1. Since all her methods failed, finally she gave him a pain-killer.
7. But, Tom gave that pain-killer to the cat Peter.
4. It jumped out of the open window.
2. He told his aunt that Peter had no aunt, so he gave him the medicine.

D. Based on your understanding of the story, write the answers for the following questions in a sentence or two.

Question 7.
What was the reason given by Tom for giving the pain-killer to the cat?
Answer:
Tom said that the cat had no aunt. So he gave it the medicine.

E. Answer the following questions in about 80-100 words.

Question 1.
Describe the different types of remedies tried by Aunt Polly on Tom.
Answer:
Tom’s aunt was the type of person who was infatuated with patent medicines and new ways of producing health or mending it. The first remedy aunt Polly tried on Tom was the water treatment. She stood him up in the woodshed and drowned him with a deluge of cold water; then she scrubbed him down with a towel like a file; then she rolled him up in a wet sheet and put him under blankets till he sweated his soul clean.

The boy remained as dismal as a hearse. Aunt Polly began to assist the water with a slim oatmeal diet and blister plasters. When she heard of Pain-killer, she ordered a lot at once. She tasted it and it was simply fire in a liquid form. She gave Tom a teaspoonful pain-killer and watched with anxiety for the result.

Question 2.
Narrate the funny sequence between Tom Sawyer and Peter, the cat.
Answer:
The “Pain-killer” became a regular treatment, and to Tom Sawyer, it tasted like liquid fire. Tired of the daily doses, one day Tom feeds a spoonful to the cat Peter, which upon receiving the medicine begins to do somersaults in the air while “spreading chaos and destruction in his path.” When Aunt Polly leams that Tom has fed the cat the pain-killer, Tom explains for his actions by saying that he “done it out of pity for the cat because he (the cat) hadn’t any aunt” to “bum him out” and “roast his bowels.”

Question 1.
Describe Peter’s reaction after having the medicine.
Answer:
Peter sprang a couple of yards in the air, and then delivered a war-whoop and set off round and round the room, banging against furniture, upsetting flower-pots, and making general confusion. Next he rose on his hind feet and danced around, in a frenzy of enjoyment, with his head over his shoulder and his voice proclaiming his happiness. Then he went tearing around the house again spreading chaos and destruction in his path.

F. Complete the summary of the extract using the appropriate words from the box below.

G. In the story we find a lot of American slang usage of English. Complete the tabular column with standard English. One has been done for you.

H. Complete the mind map based on the inputs from the extract. 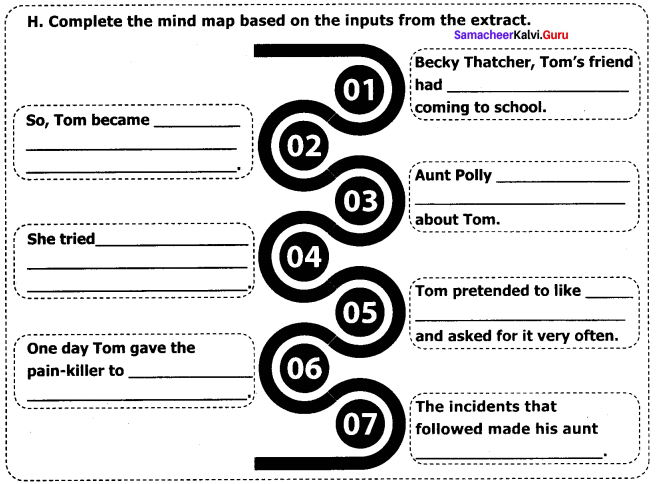 The Cat and the Pain-killer by Samuel Langhome Clemens About The Author:

Samuel Langhome Clemens (1835-1910), better known by his pen name Mark Twain, was an American writer, humourist, entrepreneur, publisher and lecturer. Twain grew up in Hannibal, Missouri, the influence of which can be seen in his novels. His wit and satire, in prose and in speech, earned praise from critics and peers, and he was a friend to presidents, artists, industrialists, and European royalty. His first success as a writer came when his humourous tall tale The Celebrated Jumping Frog of Calaveras County was published on November 18, 1865, in the New York weekly The Saturday Press, bringing him national attention. His famous works were The Adventures of Tom Sawyer and The Adventures of Huckleberry Finn.

The Cat and the Pain-killer Summary: 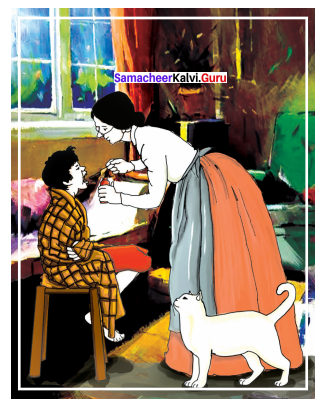 “The Cat and the Pain-killer” is one of the episodes from the novel “The Adventures of Tom Sawyer”. Tom Sawyer is a mischievous young boy growing up along the Mississippi river with his aunt Polly and brother Sid. He is up to all sorts of mischief, but somehow manages to escape from the punishments. Though he finds the school life miserable, the arrival of Becky Thatcher makes him happy. That happiness does not last long as Becky falls ill and stops coming to school.

At home, his Aunt notices that Tom is disturbed and uninterested in doing anything. So Aunt Polly, who is infatuated with patent medicines, tries them on Tom. She tries all kinds of treatments on Tom to make him cheerful again, but to no avail. Tom being fed up with Aunt Polly’s treatment says that he wants pain-killers. Aunt Polly notices that the medicines are diminishing, though she is not aware that Tom is using them to mend the crack in the sitting room floor.

One day while Tom is mending the crack with the pain-killer, the cat Peter arrives and almost begs to taste the medicine. Tom feeling pity towards the cat gives him a spoonful to taste, on which Peter springs up in the air and keeps jumping and dancing, disturbing the furniture and flower pots. Aunt Polly hearing weird noises enters just in time to see the cat perform summersets and carry some flower pots out the window. The old lady is petrified seeing all the mess and Tom’s uncontrollable laughter. Aunt Polly questions Tom regarding the cat’s behaviour. Tom replies that the cats act like this when they’re having a good time.

Aunt Polly finds the teaspoon and understands that Tom has fed the cat with the medicine. She scolds him for being so cruel to the cat, for which he answers that the cat doesn’t have an aunt like her to take care of it and that he has given the cat the medicine out of pity. Aunt Polly suddenly realizes that if the cat would feel so miserable after taking a small sip of the medicine, how the boy must be feeling. Then she puts her hand on Tom’s head saying that she was only trying to do the best for him. Tom replies that he too was only trying to do the best for the cat. Aunt Polly finally says that she wouldn’t try any more medicines on him.

The Cat and the Pain-killer Glossary: