The Envious Neighbour Warm Up:

The Envious Neighbour Question 1.
Ratna Tata, Azim Premji are a few rich people of India who spend a part of their wealth on charity. What influences them to share and care for others?
Answer:
Philanthropic attitude leads to service and caring for others, sharing one’s joys with others, makes one’s life really worth living.

The Envious Neighbour Supplementary Question 2.
Think of any undesirable quality that you would like to get rid of and discuss it with your friends.
Answer:
My anger is my greatest enemy. All my friends praise me that I have a helping tendency and a sharing heart. But they don’t like me getting angry at times. When I get angry, I lose my self-control and create an unpleasant situation. I would like to get rid of this undesirable quality by keeping myself calm. When I get frustrated, I can count numbers from 1 to 20 slowly, so that my anger can subside during that time.

The Envious Neighbour 9th Std Question 3.
‘Do you like pets? Why?
Answer:
Yes, I like pets, especially dogs. I have a pet dog at home. I have named it as ‘Caesar’. It is a German Shepherd dog. Pet dogs are man’s best friends. They are loyal, intelligent, devoted and affectionate towards us. They are known to improve our own physical and mental health.

A. Identify the character or speaker of the following lines.

The Envious Neighbour Summary In Tamil Question 1.
They gathered the treasure.
Answer:
The honest old couple

The Envious Neighbour Questions And Answers Question 2.
The pine tree under which, I am hurried, to be cut down and made into a mortar.
Answer:
The dog to the good old man

Envious Neighbour Question 3.
They dug, and found nothing but a quantity of dirt and nasty offal.
Answer:
The envious neighbours

9th English The Envious Neighbour Question 4.
He had not to wait long before he was called into the prince’s palace, and ordered to exhibit his power.
Answer:
The envious old man

B. Based on your understanding of the story choose the right answers from the given options.

C. Answer the following questions in a paragraph of about 80 to 100 words.

Samacheer Kalvi Guru 9th English Guide Question 1.
The old farmer was a kind person. Justify the statement with suitable examples from the story.
Answer:
The old farmer was a kind man. He helped the poor and the needy with what he had. He had a pet dog, which they used to feed with fish and tit-bit from their kitchen. One day, when their dog helped them in getting wealth, they did not take all for themselves.

But gave alms to the poor and then bought for themselves rice fields and corn-fields. When his neighbour killed his dog, he did not scold him. He just wept for his pet, kept some food, burnt incense and adorned its grave with flowers. He also showed his kindness to his envious neighbours, as they were distressed, by giving them a share of his own riches.

The Envious Neighbour 9th Std In Tamil Question 2.
How did the dog help the farmer even after its death?
Answer:
The dog appeared in his dream, and told him to cut the pine tree, make it into a mortar and use it, thinking of it, as if it were the dog itself. Old man did as was told. When he ground his rice in it, each grain turned into some rich treasure.

The Envious Neighbour Summary Question 3.
Why did the Prince reward the farmer but punish the neighbour for the same act?
Answer:
The prince rewarded the farmer because he made all the withered plum and cherry trees in the palace to shoot out and put forth flowers. So the prince was happy with his magical powers and sent him home rejoicing with plenty of presents. Where as the neighbour of the good old man was punished because he couldn’t perform the act of reviving the trees, after scattering the ashes on them. The ashes flew into the prince’s eyes and mouth, blinding and choking him. So the guards caught him and beat him almost to death.

9th English Unit 1 Question 4.
Bring out the difference between two neighbours with suitable examples to support your view.
Answer:
The old farmer was an honest and a kind person. He showed kindness to everyone and helped the needy at all times. But his neighbour was an envious person. He was covetous and a stingy old man. These qualities of the two neighbours were clearly shown in the story, when they nursed the dog. The good old man fed it with fish and tit-bit from his own kitchen. But when the dog was borrowed for a few days by his neighbour, he prepared a great feast for it not out of concern but to flatter it to show them the place of wealth.

Earlier, the dog had received nothing but cuffs and kicks from this wicked man. When the dog did not help the wicked man, he killed it. The wicked did a lot of misdeeds to the good old farmer. Yet they forgave him and his wife and gave them a share of their own riches.

D. Refer to what happens in the folktale and complete the story with the help of the hints given in the mind map. 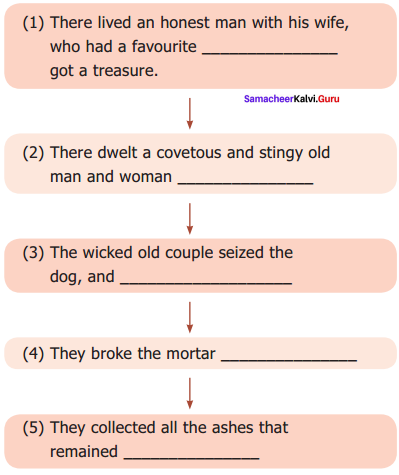 An honest man lived with his wife. They had a pet dog, which they used to feed with fish and tit-bit from their own kitchen. One day, when the couple went to work in their garden, their dog stopped at a place and started to bark. When the couple dug that place, they found gold and silver pieces being buried there. They gathered the treasure and after giving alms to the poor, bought themselves rice-fields and com fields and became wealthy people.

Their neighbours, who were stingy old couple, envied them and borrowed their dog to see if they could find any treasure with the help of the dog. They led the dog out into the garden. It walked along the garden without any barking for a long time. At last, the dog stopped at a certain spot and began to sniff. They hastily dug the spot, but found only dirt and nasty things. Furious at being disappointed, the old couple killed the dog.

When the good old man came to know that his dog was buried at the root of a pine tree, with a heavy heart, he burnt incense and adorned the grave with flowers. That night, the dog appeared to him in his sleep and instructed him to cut down the pine tree where it was buried, make it into a mortar and to use it, thinking of it, as if it were the dog itself. The old man did, as he was told to do, but when he ground his rice in it, each grain of rice turned into some rich treasure.

Seeing this, the wicked couple borrowed the mortar. But as soon as they used it, all their rice turned into filth. So, in anger, they broke it and burnt it. One night, the dog appeared again to the old man in his dream. It told him to sprinkle the ashes of the burnt mortar on withered trees. The trees would revive and bloom with flowers.

He obeyed the dog, as instructed, bringing the dead trees to life. A certain prince utilised his power and gave him a rich reward. But the envious neighbours got thrashing from the guards of the prince, when they tried to do the same act. Finally, when the good old couple heard of this, they sent for the neighbours and gave them a share of their own riches. After this, the wicked people mended their ways and led a good and virtuous lives ever after. 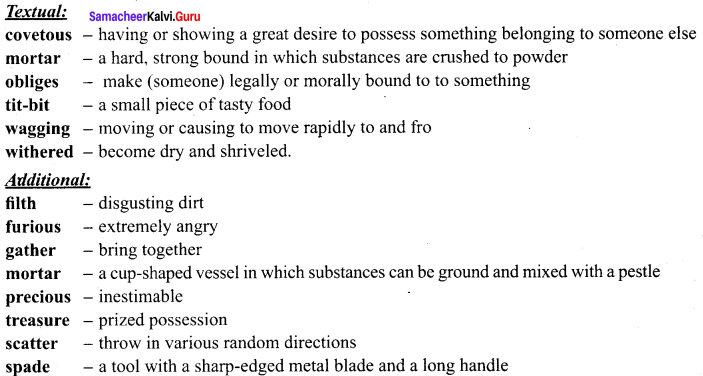