The Comet Warm Up:

Fill in the crossword puzzle using the clues given below. 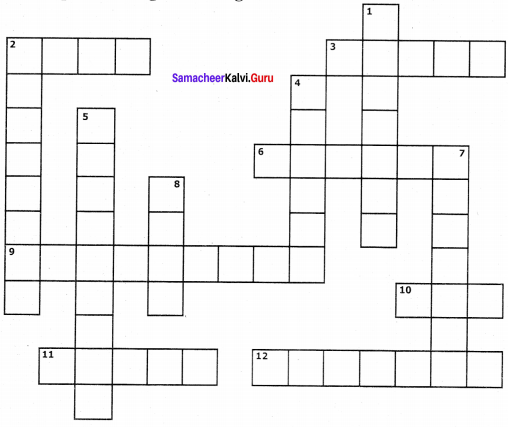 Across:
2. Earth’s only natural satellite
3. Morning star
6. Titan is the largest moon of
9. Smaller bodies in orbit around the Sun
10. The star at the centre of solar system
11. The Blue planet
12. Largest planet in the solar system 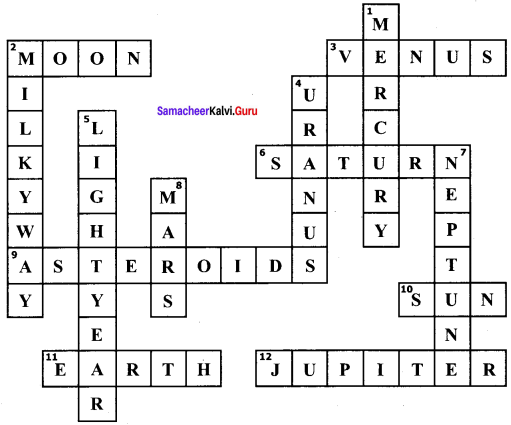 The Comet And The Moon Poem Questions And Answers

A. Memories the first three stanzas of the poem.
B. Read the following lines from the poem and answer the questions in a sentence or two.

1. “Rampaging through the heavens Never stopping day or night, ”

The Comet Poem Summary Question (a).
How does the comet travel?
Answer:
The comet travels through the sky, making a lot of noise and causing damage.

The Comet Poem Stanza Wise Explanation Question (b).
Which word could you replace ‘rampaging’ with?
a. charging b. rolling c. speeding d. flying
Answer:
Rampaging can be replaced with charging.

2. “Faster than a cheetah With a tail that’s miles long.”

The Comet Poem Question (a)
Why is the comet compared to a cheetah?
Answer:
Comet is compared with the cheetah due to its speed.

3. “With shockwave reaching to the ground Causing the land to quake”

Comet Poem 9th Class Question (a).
What is reaching to the ground?
Answer:
The shockwave produced by the comet reaches the ground.

The Comet Poem Line By Line Explanation Question (b).
What is causing the land to quake?
Answer:
The shockwave causes the earth to quake.

4. “In the dust they leave behind,
Could have started life on the earth Which resulted in mankind”

Comet Poem Summary Question (a).
What does the word ‘they’ refer to?
Answer:
They refers to the comet.

5. “But I know no better spectacle Than a comet in full flight”

The Comet Poem Explanation Question (a).
Who does ‘I’ refer to?
Answer:
‘I’ refers to the poet, Norman Little ford.

The Comet And The Moon Poem Questions And Answers Additional Questions

1. “A spectacle of a lifetime A comet in full flight.”

2. “The outer ice is melting Causing vapor from the force, ”

The Comet Poem Stanza Wise Summary Question (a).
Why is the outer ice melting?
Answer:
The outer ice is found around the comet and it is melting because it speeds past the sun.

3. “Rampaging through the heavens Never stopping day or night,
A spectacle of a lifetime A comet in full flight. ”

4. “If one should come too close to earth
The atmosphere will shake,
With shockwave reaching to the ground .
Causing the land to quake.”

The Comet Poem Figure Of Speech Question (a).
What does ‘one’ refer to?
Answer:
‘One’ refers to the comet in full flight.

5. “Scientists say the chemicals In the dust they leave behind,
Could have started life on the earth Which resulted in mankind.”

The Comet By Norman Littleford Summary Question (a).
What do the scientist feel?
Answer:
The scientists feel that the mankind started to emerge in this earth only from the chemicals left behind in the dust caused by the comets, when they fell on the earth.

C. Complete the summary by filling in the given spaces with suitable words/phrases given below.

If one should come too close to earth
The atmosphere will shake,
With shock wave reaching to the ground
Causing the land to quake.

Question 4.
What will happen when a comet will fall on the earth?
Answer:
If the comet were to hit the Earth, it would cause a huge explosion.

E. Answer the following questions in about 80-100 words.

Question 1.
Narrate how the poet describes the comet.
Answer:
According to the poet, Norman Little ford, the comet is a remarkable scene for the generation to see when it is in full speed. It speeds past through the blue skies day and night without stopping. The poet says that the cheetah is not as fast as the comet. He instills the fact that the comet has a long tail which is more than a mile. The poet speaks about the strength of the comet and says that it is like a mountain, strong and powerful. The outer covering of ice melts when the comet goes near the sun.

Question 2.
Give a detailed account of the various effects caused by the comet to the earth.
Answer:
As the comet speeds past, the poet says the outer ice covering melts, causing steam from the energy. It leaves a trail behind it as it travels on its course. If a comet comes close to the earth, the atmosphere will vibrate, sending shockwave to the ground. It will also cause the land on earth to tremor. Scientists feel that the comets leave behind chemicals in the dust. This could have been the reason for life on the earth resulting in mankind.

F. Listen to the passage on ‘Comet’ and fill in the blanks by choosing the correct answer.

(For listening to the passage refer to our website www.fullcircleeducation. in) Comets, meteors and asteroids have several things in common. First, they are believed to be remnants of the materials that created the Sun and the planets. Basically, they’re leftovers. Comets, meteors and asteroids are too small to be planets. Some are only a few feet in size, while others are a mile or more long.
Comets are mostly made of ice. They are very old. As comets travel close to the Sun, some of the ice melts off and becomes a gas. This melting process causes bits of dust and debris to trail behind the comet. This tail can be seen in the night sky as a bright, quickly-moving light. Comets orbit at the very edge of the galaxy, past Pluto.

5. State whether the statement is true or false
The melting process causes bits of dust and debris to trail behind the comet.
Answer:
True

G. Imagine you are interviewing an astronaut about his/her experiences in space. Select a partner to be an astronaut and present the interview as a role-play in front of the class.

Interviewer: How does it feel to be the first Indian to have accomplished this feat?
Astronaut: I feel unfortunate for the scientific community. I feel that my flight was before its time since our country’s space programme was not mature enough at that point to launch a space shuttle.
Interviewer: What was the reaction of your parents at this news?
Astronaut: It is indeed a moment of pride to represent the country, however they too knew the dangers behind it. Hence it was mixed verifications.
Interviewer: Is it different to travel in a space shuttle and an aeroplane?
Astronaut: There is immense difference. The environment of space cannot be duplicated on the earth. Hence training isn’t practical when it comes to the gravitational force. It’s tough to manage but you know you have no other go and your focus is on the achievement.
Interviewer: What are the qualities that you would credit your success to?
Astronaut: When you are in Rome be a Roman is the most important quality you need. Be bold, be optimistic and realize that you are the chosen one to create opportunities and make history.
Interviewer: How did your parents influence your personality and your choice of career?
Astronaut: They never forced me into a career of their choice. They allowed me to go after my passion and stood by my side to explore the unknown world.
Interviewer: Thank you so much for taking time off your busy schedule.

H. Imagine that you and your friend get a chance to visit another planet. There you befriend an alien who takes you around the planet. After reaching the earth, write a letter thanking him for all the help he did.

Dear Alien,
‘I am glad that Jack and myself met you at Mars. I am sure we would have been lost without you. You were such a great moral and physical strength. Thanks for being a constant support to us. We are so glad to have found a friend in you. You made our journey memorable. We reached Earth safely last week and we felt we should thank you for all that you did for us when we were in Mars. Hope you too miss us just as we keep talking about you often and miss you so much. Do visit us in our planet Earth. Mother Earth is filled with greenery because of the water resources which is more than the land here.
Thank you for taking us around in Mars. It was great learning about the red planet, the fourth planet from the sun. I am surprised that there are high mountains and the deep, long valleys in the solar system.
I hope to come again though it’s impossible. I seem to be dreaming of dwelling there and I keep imagining myself to be in conversation with you. Jack sends his wishes to you and feels the same for your friendship. Hoping to see you soon and take care.

The Comet by Norman Littleford About The Poet:

Norman Littleford (18 May 1889 – 20 May 1947) was an American poet, born in Maryland, USA. Most of his works focused on life and nature. His poems are simple but deep in thought and provoke the readers to absorb the ideas beyond the usual.

The Comet Poem Summary In English By Norman Littleford 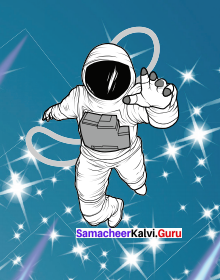 The poet here speaks about the spectacular sight of a comet in full speed. The poet observes how the comet rampages through heavens continuously day and night. It moves faster than a cheetah with a tail that is miles long. It is as powerful and strong like a mountain. The outer ice melts, whose vapour leaves a long trail on its course. In case a comet approaches the Earth, it will shake the atmosphere and the shockwave will lead to an earthquake. Scientists believe that the chemicals left behind by the comet have given rise to life on Earth. The poet is not sure if that is true. However, he is well aware of the fact, that the passage of a comet is the best spectacular sight ever seen in his life.