I. Choose the best answer:

8th Standard Water Lesson Question 3.
The gas collected at the cathode on electrolysis of water is ………….
(a) oxygen
(b) hydrogen
(c) nitrogen
(d) carbon dioxide
Answer:
(b) hydrogen

Samacheer Kalvi Guru 8th Science Question 4.
Which of the following is a water pollutant?
(a) Lead
(b) Alum
(c) Oxygen
(d) Chlorine
Answer:
(a) Lead

III. State True or False. If false, correct the statement:

Samacheer Kalvi 8th Science Solutions Question 1.
Sewage should be treated well before being discharged it into water bodies.
Answer:
True.

Correct statement:
Sea water is not suitable for irrigation as it has high salinity.

V. Give reasons for the following:

Samacheer Kalvi 8th Science Book Question 6.
Hard water is not good for washing utensils.
Reason:
Hard water damages the utensils and containers in which it is stored and forms a hard layer.

Samacheer Kalvi 8th Books Solutions Science Question 1.
Freezing Point.
Answer:
The temperature at which a liquid turns into solid when cooled is known as freezing point. The freezing point of water is 0°C.

8th Standard Samacheer Kalvi Science Question 2.
Boiling point.
Answer:
The temperature at which a water boils and changes to steam is called as boiling point. The boiling point of water is 100°C at atmospheric pressure.

Question 1.
Name the gas evolved at cathode and anode when water is electrolysis. State their ratio by volume.
Answer:

Question 2.
State the importance of dissolved oxygen and carbon dioxide in water.
Answer:

Question 3.
What are the causes of temporary hardness and permanent hardness of water?
Answer:

Question 5.
What are the methods of removing hardness of water?
Answer:

Question 1.
How is water purified at a water purification plant?
Answer:
In conventional water treatment plant, water is subjected to different process. They are:
Sedimentation: 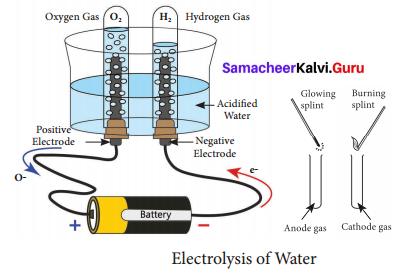 Question 4.
Explain the different ways by which water gets polluted.
Answer:
1. Domestic Sewage.
Untreated sewage contains impurities such as organic matter from food waste, toxic chemicals from household products and it may also contain disease-causing microbes.

5. Oil spills.
Oil spills cause water pollution which is harmful to aquatic life.

6. Thermal pollution.
Water used for cooling purposes is discharged back to a river or to original water source at a raised temperature and sometimes with chemicals. This rise in temperature decreases the amount of oxygen dissolved in water which adversely affects the aquatic life.

I. Choose the correct Answer:

Question 4.
The boiling point of water increases with …………….. in pressure.
(a) decrease
(b) increase
(c) increase or decrease
(d) none
Answer:
(b) increase

Question 5.
The freezing point of water …………….. with increase in pressure.
(a) increase
(b) decreases
(c) remains same
(d) none
Answer:
(b) decreases

Question 10.
Which one of the following has the highest latent heat of vaporization?
(a) Ice
(b) Water
(c) Steam
(d) Metal
Answer:
(c) Steam

III. True or False. If false, give the correct statement:

Question 2.
Temporary and permanent hardness both can be removed by the method of boiling.
Answer:
False

Correct statement:
Temporary and permanent hardness both can be removed by the method of distillation.

Question 3.
The pleasant taste of drinking water is due to the presence of dissolved substance which include air, CO2 and minerals.
Answer:
True.

Question 4.
Micro-plastics can be found in almost every freshwater source.
Answer:
True.

Question 5.
During electrolysis, hydrogen and oxygen are obtained in the ratio 1 : 2.
Answer:
False

Correct statement:
During electrolysis, hydrogen and oxygen are obtained in the ratio 2:1.

Question 1.
Name the process by which temporary hardness is easily removed from water.
Answer:
Boiling.

Question 3.
What is the taste of distilled water & boiled water?
Answer:
No taste.

Question 1.
What are the sources of water pollution?
Answer:

Question 6.
What is soft water?
Answer:
Water contains a number of dissolved salts and minerals. When these salts are present in very small quantities in water, it is called soft water.

Question 8.
Write a short note on catalytic nature of water.
Answer:
Water acts as a catalyst in a number of reactions. Perfectly dry hydrogen and chlorine gases do not react in the presence of sunlight. However in the presence of traces of water, the reaction takes place with explosion to produce hydrogen chloride.

Question 9.
What are the physical properties of pure water?
Answer:
Pure water is a clear and transparent liquid:

Question 1.
Tabulate the sources and effects of domestic and industrial pollutants.
Answer: 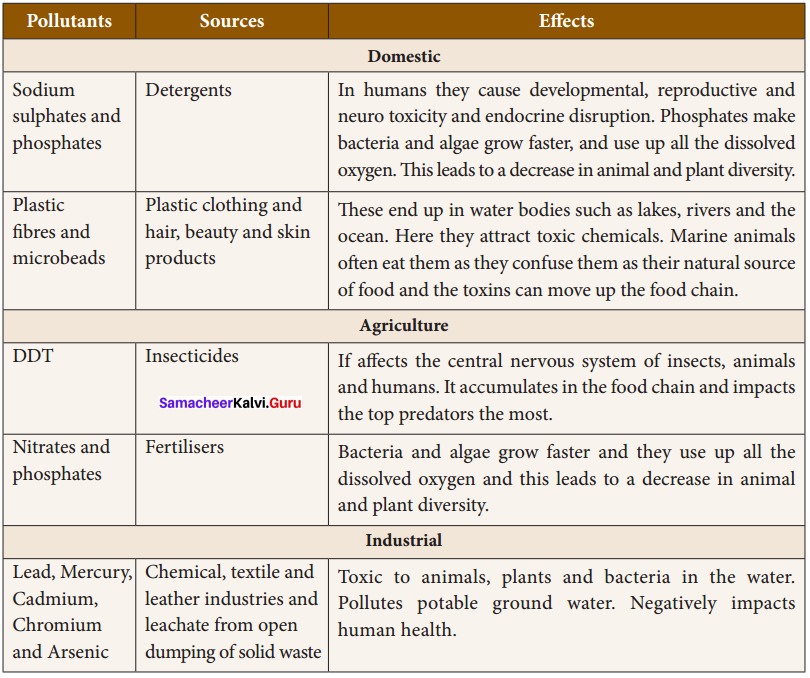 Question 4.
Explain the importance of dissolved salts in water.
Answer:

Question 1.
Place a sample of tap water on a clean watch glass and place it over a beaker containing water, as shown in Tap water the figure. Boil the water in the beaker. When all the water has evaporated from the watch glass, remove it from the burner and let it cool. What do you see on the watch glass? 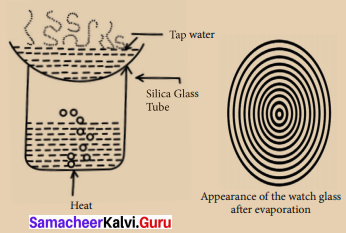 Question 1.
Take two pots with similar plants. Water one of the plants with tap water and the other with sea water. Record your findings and note the difference observed.
Answer:
Observation:

Question 2.
Which water is soft?
Answer:

Question 3.
Which water is hard?
Answer:
Tap and well water are considered as hard due to presence of large quantity of minerals and salts.