I. Choose the correct answers

Question 2.
Razia was an able and brave fighter.
Answer:
True

Question 4.
FirozShah Tughluq refused to accept an invitation from a Bahmani Prince to intervene in the affairs of the Deccan.
Answer:
True

V. Match the statement with the reason.
Tick (✓) the appropriate answer.

(b) Find out the correct pair

Answer:
2. Razia established the department of spies to gather intelligence about the conspirators and the trouble makers against her rule.

VI. Answer the following in one or two sentences

Question 4.
Write a note on chahalgani.
Answer:
In order to counter the possible attack of the Mongols, Iltutmish organised Turkish nobility into a select group of 40 nobles known as chahalgani or The Forty.

Question 5.
How did Ala-ud-din Khalji consolidate the Delhi Sultanate?
Answer:

Question 6.
List out the contributions of Firoz Shah Tughluq.
Answer:

Question 1.
Write about the invasion of Timur in 1398.
Answer:

Question 1.
How would you evaluate Muhammad-bin- Tughluq as Sultan of Delhi?
Answer:
Muhammaad – bin – Tughlug was a learned but cruel man. He was a poor decision maker. There was chaos in the social, economic and political condition of the empire because of his ambiguous decisions. The first and foremost was changing the capital from Delhi to Devagiri or Daulatabad and vice versa which led to loss of money and human lives. He also ordered the revenue to be collected in money instead of grains. This move led to bankruptcy and famine. Though he was wise and learned his hasty decisions led to his downfall.

IX. Map Work
On the river map of India draw the extent of Tughluq Dynasty and mark the following places. 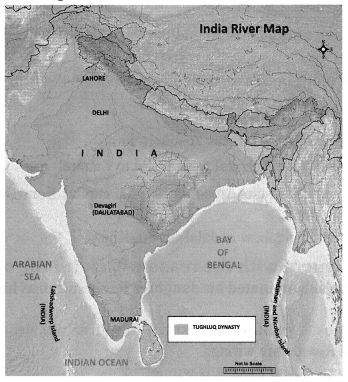 Question 1.
Match the Father with Son

Question 1.
Balban abolished ‘The Forty’ as it was hostile to him.
Answer:
True

IV. Match the statement with the reason. Tick (✓) the appropriate answer:

Question 1.
Write a short note on the Sack of Chittor.
Answer:
Sack of Chittor :When Ala-ud-din’s army overwhelmed the Rajput army in Chittor and in the context of threat of defeat, the men and women of the fortress, in accordance with their old custom, performed the rite of jauhar.

Question 2.
What is Indo-Saracenic architecture? Name a few structures constructed in this style.
Answer: