A. Fill in the table
Answer:

B. Answer the questions briefly

Journey By Train Summary Question 2.
What was the reaction of the inhabitants?
Answer:
Snakes and tigers fled at the noise Of the train. The elephants stood gazing with sad eyes at the train, as it passed.

Journey By Train Question Answer Question 3.
What did Mr. Fogg mean by, ‘it was foreseen’?
Answer:
Mr. Fogg meant that some difficulty or the other would sooner or later arise on his route.

Journey By Train 7th Standard Summary Question 4.
Describe the elephant driver in your own words.
Answer:
The elephant driver was intelligent and a skilled young man. He covered the elephant’s back with saddle-cloth. He attached seats on each of its side. He sat on the neck of the elephant and set out from the village with the three passengers.

Journey By Train Book Back Answer Question 1.
What qualities of Mr. Phileas Fogg are highlighted in this extract? Support your answer with suitable examples.
Answer:
Mr. Phileas Fogg was a rich, English man. He was a member of the Reform Club of London. He orders his life precisely by the clock and makes a bet with fellow club members that he can travel around the world in 80 days. He travels with his French servant Passepartout. He is a precise and intelligent man. He is perfect in his manners and is very punctual as well as particular about what he wants. This is evident in this extract, when he is determined to travel to Allahabad as planned. He even goes to the extent of purchasing an elephant for 2000 pounds to continue his travel to Allahabad. These qualities of Mr: Fogg are highlighted in his extract.

D. Fill in the blanks with correct travel words.

(schedule,reach,book,railway,pack,board)
Answer:
To make travel convenient, we must book tickets well in advance. Then we have to Pack our things and schedule our trip. We have to reach the railway station in time and board the train in order to reach our destination.

E. Match the phrasal verbs with their meanings

Refer to a dictionary. Find the meaning of the following words and write them down.
Answer:

G. Listen to the teacher reading the Weather forecast and complete the report.
Answer:
Name of the Cyclone is Gaja it may affect the places North Tamil Nadu and Puducherry Heavy rains are expected on November 14th and 15th It is 880 km away from Nagapatinam.

H. Your family has decided to go on a tour during the vacation. You are calling a travel agency and seeking information regarding package, places of visit, cost etc. Work in pairs and role play as a receptionist and a customer.
Answer:
Receptionist: Good morning. This is Sai Dwaraka Mai Travel Agency. How can I help you?
Customer: We would like to go to a tour to Shirdi temple. Can you give us the information regarding the package, places of visit and the cost for it.
Receptionist: Yes, Madam. We offer flight packages from Chennai to Shirdi at affordable prices.
Customer: Okay Sir, what are the places of visit over there?
Receptionist: We take you to places like Dwarkamai, Chavadi, Gurusthan, Sai Museum, Maruthi temple and Nandadeep.
Customer: Okay fine. We would like to book tickets for the tour, as we would like to go any day between 23rd November and 27th November. What is the cost for four people?
Receptionist: It costs Rs. 9,9991- per person. So the total amount for four people would be Rs. 39,996/-
Customer: Thank you Sir, I will get back to you immediately, after discussing with my family members.
Receptionist: Thank you for calling, Madam. Have a nice day.

I. Rewrite the story in the past tense.
Answer: 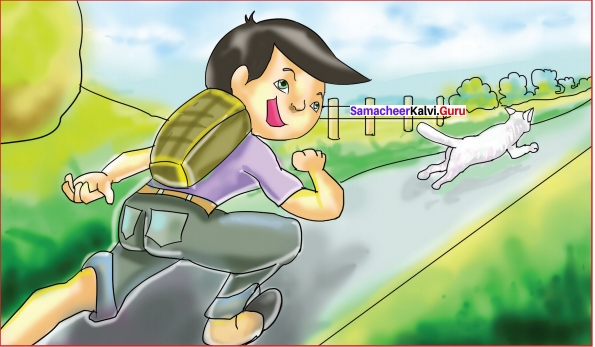 The boy chased a cat. The cat climbed up the tree and purred from the branch of the tree. The cat jumped to another tree. The boy who was chasing the cat noticed a snake under the tree. He left his attempt to catch the cat and he ran home screaming for help

J. Look at the picture and complete the following 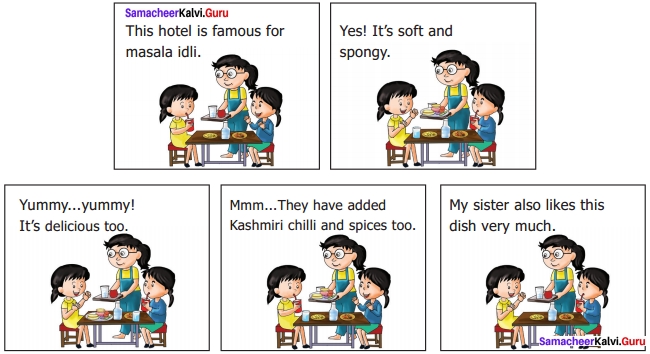 K. Your friend is coming to your city / town to spend a week with you. He /she wants to visit some tourist places, and enjoy the special food items of the place. Prepare a two day itinerary for the visit.
Answer: 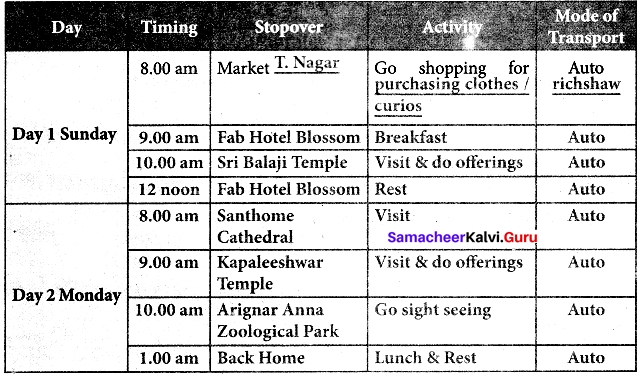 L. You are waiting to board a train in a railway station. The train is delayed by an hour. Write a paragraph about the crowded scene in the railway station based on your observation. 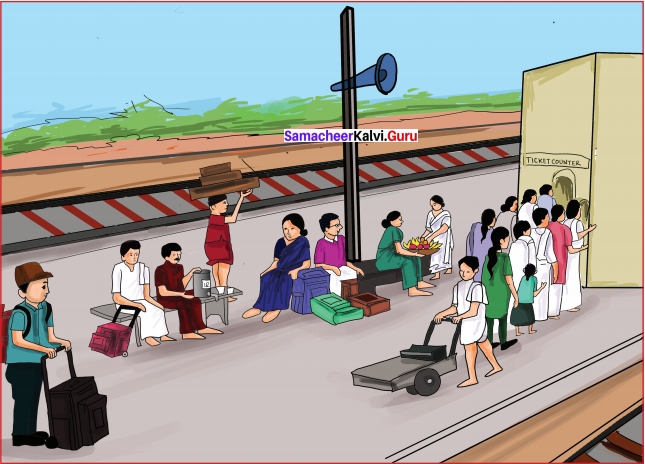 Answer:
I was waiting to board a train at a railway station. The train was delayed by an hour. A lot of families were waiting eagerly for the announcement of the arrival of the train. Some of the porters were carrying the luggage of the passengers. Piles of luggage were seen all over. There were fruit vendors, tea vendors and other shops selling water, milk and snacks. By the ticket counter, there was a queue, waiting to buy tickets. The scroll board was displaying the necessary information for the passengers. The porters were also using trolleys to carry the luggage.

I. Choose the correct Synonyms from the options below.

II. Choose the correct Antonyms from the options below.

Question 4.
waking
(a) sleeping
(b) arousing
(c) raising
(d) getting up
Answer:
(a) sleeping

Question 2.
An hour after leaving _________ the train had passed the bridges and the island of salcette.
(a) Allahabad
(b) Calcutta
(c) Lucknow
(d) Bombay
Answer:
(d) Bombay

Question 2.
Who were there among the passengers?
Answer:
There were a number of officers, Government officials and merchants.

Question 4.
Who was Sir Francis?
Answer:
Sir Francis was one of the friends of Mr. Fogg.

Question 5.
Where did he meet him?
Answer:
He met him on the ship Mongolia that brought him to Bombay.

Question 8.
How much did Mr. Fogg offer to hire the Elephant at first?
Answer:
He offered ten pounds per hour to hire the elephant.

Question 1.
What did Passepartout see, when he was crossing India in a railway train?
Answer:
Passepartout on waking looked out. He could not believe that he was actually crossing India. The locomotive, guided by an English engineer and fed with coal, threw out its smoke upon cotton, coffee, nutmeg, clove and pepper plantations. The steam curled in spirals around groups of palm-trees. In the midst of these trees were attractive bungalows, viharas and marvellous temples, decorated by the rich work of Indian architecture. There were vast areas extending to the horizon with jungles and forests. There he saw snakes, tigers and elephants.

Question 2.
Who served as a guide to Mr. Fogg and others? How did he manage to take all the three to Allahabad?
Answer:
A young intelligent man offered his services as a guide. The elephant was led out and equipped. The skilled driver covered the elephant’s back with a sort of saddle-cloth and attached to each of its side some uncomfortable howdahs. While Sir Francis and Mr. Fogg took the howdahs on either side, Passepartout got on to the saddle-cloth between them. The driver positioned himself on the elephant’s neck and they set out from the village at nine o’clock by short cuts through the dense forests of palms.

The actual words spoken by a person is Direct speech. They are enclosed within quotation marks.
When we later report this, making changes to the words the speaker originally said, it is Reported Speech. (Indirect Speech)

I. Change into Indirect Speech.

Question 2.
Radha said, “I am going out”.
Answer:
Radha said that she was going out.

Question 3.
Ravi said, “I can swim”
Answer:
Ravi said that he could swim.

Work in pairs. Choose six items which are essential for a camp. Rank their priority and justify your answer. 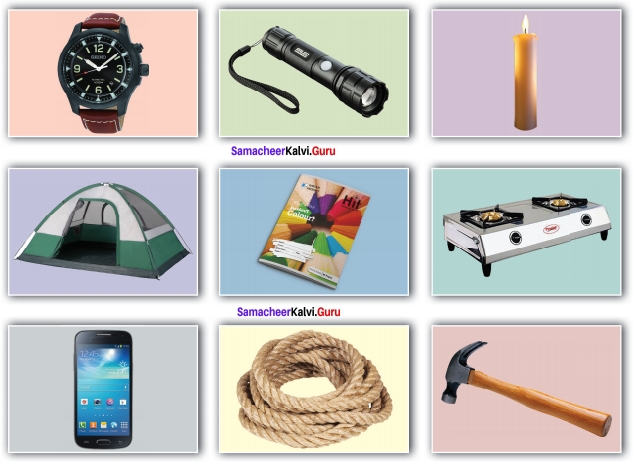 These things are essential for a camp because without these things, we cannot enjoy our camp. Camping is an amazing experience. So we should prepare ourselves properly with the essential items taken along with us. This will avoid frustration and stress.

This story tells us of an amazing journey by an Englishman Mr. Phileas Fogg. He is a ruthless perfectionist who cares more about the bet than
the native places, he sees on his travels. He will do anything, even lie and cheat, to get what he wants.
Mr. Phileas Fogg along with his French attendant, Passepartout, attempts to go round the world in eighty days by taking a bet for $ 20,000. They travel through some parts of India. That was the time, when the railways were being built in the country. The train started at the scheduled time from Bombay. There were a number of passengers like officers, government officials and merchants in the train. Sir Francis Cromarty, one of Mr. Fogg’s friends, occupied a seat opposite to them. The train passed the bridges, the Island of Salcette, mountains, jungles, forests and the fertile territory of Khandesh.
Passepartout couldn’t believe that he was actually crossing India in a railway train. Tigers and snakes fled at the noise of the train. Elephants stood gazing at the train with sad eyes. At half-past twelve, the train stopped at Burhampoor. The travellers had a hasty breakfast. The train entered the valleys of Sutpour Mountains at three in the morning.

Question 1.
Give a picturesque view through which the train travels.
Answer:

The train stopped at 8 o’clock some fifteen miles beyond Rothal. Phileas Fogg and others were annoyed. They were wondering why there was a halt of the train in the midst of the forest. When they enquired, the conductor informed them that the railroad lines ends at Kholby, 50 miles short of Allahabad. The line begins again from there in Allahabad. Sir Francis got angry because they sold the tickets from Bombay to Calcutta, without confirming about the railroad lines.

The passengers had to provide means of transportation for themselves from Kholby to Allahabad. So, Mr. Fogg, his attendant and Sir. Francis planned to reach Allahabad in time by some means of transport, as a steamer was ready to leave Calcutta for Hongkong on the 25th. They had two days left to reach Calcutta.

Question 2.
Why was Sir Francis angry?
Answer:
There were no railroad lines from Kholby to Allahabad. But the tickets were sold from Bombay to Calcutta. So Sir Francis was angry.

After searching the village from end to end, Mr. Fogg and Sir. Francis came back without finding any means of transport. But Passepartout suggested that they can travel on an Indian elephant. As it could travel rapidly for a long time, Mr. Fogg determined to hire it. Even though Mr. Fogg offered excessive amount to hire the elephant, the elephant’s owner refused to hire it. So Mr. Fogg finally purchased the elephant for two thousand pounds. A young man offered his services as a guide to them.

While Mr. Fogg and Sir Francis took the howdahs on either side, Passepartout got on to the saddle-cloth between them. The driver sat on the elephant’s neck and at 9 o’clock set out from the village to Allahabad.

Question 1.
Which mode of transport did Fogg choose?
Answer:
At first, Fogg chose to go on foot to Allahabad. Then he purchased an elephant to take them to Allahabad.

Question 2.
Did he hire Kiouni? Why?
Answer:
No, he did not hire Kiouni, but purchased it for 2000 pounds, because the owner of the elephant intended to make a big bargain and so refused to hire him.