I. Choose the appropriate answer:

II. Fill up the blanks:

III. True or False. If False, give the correct statement:

Samacheer Kalvi Guru 6th Science Question 1.
Heat is a kind of energy that flows from a hot body to a cold body.
Answer:
True

Samacheer Kalvi 6th Science Question 4.
Borosilicate glass do not expand much on being heated.
Answer:
True

IV. Give reasons for the following:

Heat Samacheer Kalvi Question 1.
What difference do you think heating the solid will make in their molecules?
Answer:

Fitting the iron rim on the wooden wheel:

Cracking of a thick glass tumbler:

Question 1.
When a window is accidentally left open on a winter night, will you feel uncomfortable because the cold is getting in, or because the heat is escaping from the room?
Answer:

In such a case, the body feels cold sensation. When we are too cold, our blood vessels narrow. This reduces blood flow to our skin to save body heat. We may start to shiver. When the muscles tremble this way, it helps to make more heat.

Hypothermia can be serious one or even deadly. Low body temperature usually happens from being out in cold weather. But it may also be caused by alcohol or drug use, going into shock, or certain disorders such as diabetes or low thyroid.

Question 3.
If you heat a circular disk with a hole, what change do you expect in the diameter of the hole? Remember that the effect of heating increases the separation between any pair of particles.
Answer:

Question 1.
Take three bowls. Pour very cold water in the first bowl. (you can also add ice cube for cooling). Place luke warm water in the second. Half fill the third with hot water (-not hot enough to burn!) 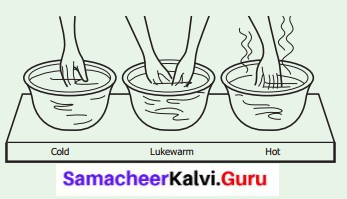 Set them in a row on the table, with the lukewarm water in the center. Place your right hand in the cold water, and your left hand in the hot water. Keep them in for a few minutes. Then take them out, shake off the water and put both into the middle bowl. How do they feel?
Answer:
I feel that my right hand’s coldness is changed into warm condition, because my right hand’s temperature is increased.
I feel that my left hand’s heat is decreased and it is also in wann condition. Here, my left hand’s temperature is decreased.

Question 3.
Is Neela correct?
Beaker A and B has water at 80°C. Then pour the water of A and B to an empty beaker C. Now, What is the A temperature of the water in the beaker C? Neela says it will be 160°C. 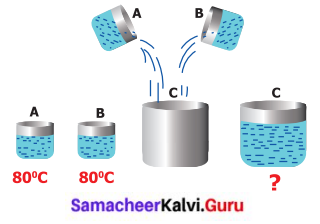 What is your opinion? Does Neela say correctly? Make a guess and verify it experimentally.
Answer:
My opinion is that the temperature will not change. Approximately it will be 80°C only. Neela’s answer is wrong.
Beaker A and Beaker B has water at 80°C. So both beaker has 80°C temperature. Two beakers are in thermal equilibrium. So heat is not transfered to other objects. 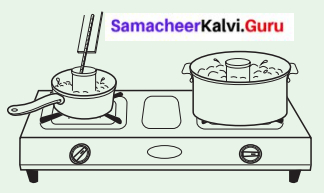 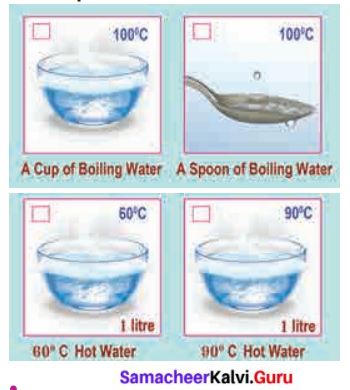 The temperature determines the direction of flow of heat.

Question 1.
You are holding a hot cup of coffee, would the Heat energy transfer from 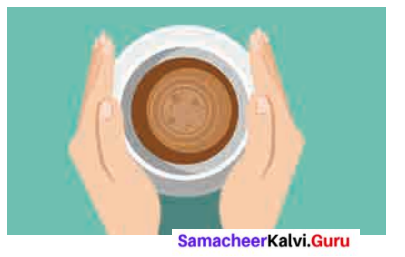 Question 2.
You are standing outside on a summer day. It is 40°C outside (note that normal body temperature is 37°C). Would the Heat energy transfer from.

Question 3.
You are standing outside on a winter day. It is 23°C outside. Would the heat’ energy transfer from:

Activity 4
Hammer a nail into a tin can. Ease the nail out. Put it in again to make sure that the hole is large enough for the nail. Then, holding the nail with a pair of pliers, scissors or forceps, heat the nail over a candle, in hot water, or over the stove. Try to put it into the hole in the can. 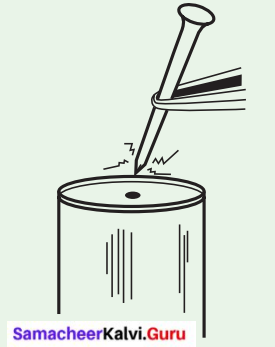 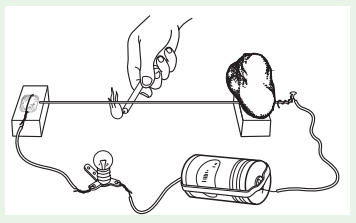 Connect a bulb and dry cell to the free ends of the wires connected to the coin and the spoke and make the circuit shown in the figure.

When the tip of the free end of the spoke touches the coin, the circuit is completed and the bulb lights up. Check to ensure this. If the bulb does not light up, it means the circuit is not complete, so check your connections properly. (Note: We will learn about electric circuit elaborately in electricity lesson.) Now slide a page of your book between the coin and spoke and then slide it out. That way you would get a gap between the coin and spoke equal to the thickness of the sheet of paper, 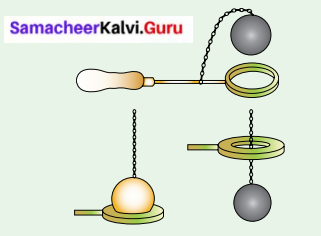 Question 2.
Now let the ball cool down, and check whether it passes through the ring.
[ ] Passed through
[ ] Not passed through
Answer:
[✓] passed through
Solids expand due to heat and come back to the original state if heat is removed.

Give Reasons for the following

Question 1.
Gaps are left in between rails while laying a railway track.
Answer:

Question 2.
Gaps are left in between two joints of a concrete bridge.
Answer:

Question 3.
The photographs below show an expansion joint at the end of a bridge in winter and in summer. Which season is shown in each picture? Explain how do you know?

Answer:
Bridges are made of concrete and steel. These components expand with higher temperature during summer and the gap is minimized in between the joints. So, summer season is shown in Picture B.

During winter, the components (concrete and steel) contract due to lower temperature. Therefore the gap is at maximum in between the joints. So, winter season is shown in Picture A.

Question 1.
I put a kettle containing 1 litre of cold water on the gas stove, and it takes 5 minutes to reach the boiling point. My friend puts on a small electric kettle, containing 1/2 litre of cold water, and it takes 5 minutes to get up to boiling point. Which gives more heat in 5 minutes?
a. the gas supply; or
b. the electricity supply? Can you say how many times as much?
Answer:
The gas supply, Two times as much.

I. Choose, the appropriate answer:

III. True or False. If False, give the correct statement:

Question 1.
The sun give us light and heat.
Answer:
True

Question 5.
Two objects are said to be in thermal contact if they can exchange heat energy.
Answer:
True.

Question 1.
How can heat energy be generated?
Answer:
Heat energy can be generated by the burning of fuels like wood, Kerosene, Coal, charcoal, gasoline/petrol, oil, etc.

Question 2.
What is heat? Give its units.
Answer:

Question 3.
What are the units of heat used?
Answer:
SI unit of heat is Joule. The unit calorie is also used.

Question 5.
Define – Calorie.
Answer:
The amount of heat needed to raise one gram of water by one degree Centigrade.

Question 8.
How solids are expanded on heating?
Answer:
The molecules in the substance move faster when heating, spread apart and occupy more space. So substances expand when heated.

Question 10.
What type of glassware is used in laboratories? Why?
Answer:
Pyrex glass is used in Laboratory, because pyrex glass (Borosilicate glass) do not expand much on being heated and therefore they do not crack.

Question 1.
List and describe the sources of heat.
Answer: