A. Read the story again and fill in the table with the present condition of the characters given below.
Answers:

B. Answer the questions.

Question 5.
How was the court different from other courts?
Answer:
The punishment there is decided by the victims and they decide by majority, if the verdicts are more than one.

Question 6.
Why did they decide to forgive him? Who initiated the suggestion?
Answer:
They decided to forgive him because it was the first offence of Mahesh and they agreed to give him a second chance. This suggestion was initiated by Ms. English.

Question 7.
Was it real or a dream? How could you say?
Answer:
It was a dream, we know this at the end, when Mahesh’s mother shakes him up to get up, as it was late for school.

C. Read the lines and answer the questions.

1. “You have to undo what you have done. Do you understand?”

Question b.
What was he asked to undo?
Answer:
He was asked to rectify or to set right the ill-treatment done to Ms. English.

2. I especially envy my brother, who belongs to Shobitha.

Question a.
Who is envy of whom?
Answer:
Mr. Geography is envy of his brother, who belonged to Shobitha.

Question b.
Why does he envy his brother?
Answer:
He envied his brother because he was neatly covered and handled gently by Shobitha.

3. “I don’t mean to interrupt, You Honour, it is just that I feel that everyone deserves a second chance and, after, all this is Mahesh’s first offense, he deserves a little consideration.”

Question a.
What do these lines tell about the speaker?
Answer:
The speaker is sympathetic and faithful to her owner Mahesh.

Question 1.
If you were Ms, English, would you do the same? Why or Why not? Justify your answer,
Answer:
If I were Ms. English, I would do the same because it was the first offence of Mahesh. He should be given another chance to rectify his mistakes and faults. Being a child, he deserves a little consideration. Since he was given a second chance, he realised his mistakes and tried to set them right. The following year, he got the prize for the ‘Best Looked-After Books’.

Question 1.
Prepare a chart with dos and don’ts of books and class work maintenance. Use your creativity in presenting your ideas. Use short sentences and phrases.
Answer:
Maintenance of Books
Do’s
Sample:

F. Collect any three pictures of your favourite cartoon characters and get them pasted in your class work. Write a few lines about them.
Answer:
1.

Mickey Mouse is a funny animal cartoon character and the mascot of The Walt Disney Company. He was created by Walt Disney and Ub Iwerks in 1928. An anthropomorphic mouse who typically wears red shorts, large yellow shoes, and white gloves, Mickey is one of the world’s most recognizable characters. He appeared in over 130 films. Beginning in 1930, Mickey has also been featured extensively as a comic strip character. 90th Anniversary of Mickey Mouse has been celebrated on November 18, 2018 around the World. 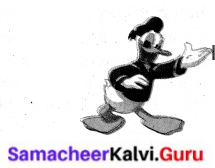 Donald Duck is a cartoon character created in 1934 at Walt Disney Productions. Donald is an anthropomorphic white duck with a yellow-orange bill, legs, and feet. He typically wears a sailor shirt and cap with a bow tie. Donald is most famous for his semi-intelligible speech and his mischievous and temperamental personality. Along with his friend Mickey Mouse, Donald is one of the most popular Disney characters and was included in TV Guide’s list of the 50 greatest cartoon characters of all time in 2002.

Scoobert “Scooby” Doo is the eponymous character and protagonist of the animated television franchise of the same name created in 1969 by the American animation company Hanna-Barbera. Scooby-Doo is a male Great Dane and lifelong companion of amateur detective Shaggy Rogers, with whom he shares many personality traits. He features a mix of both canine and human behaviors, treated by his friends more or less as an equal while speaking in a famous speech impediment. His catchphrase is “Scooby-Dooby-Doo!”

Read the following and have a discussion on which of these are fair and ethical to laugh at and which are not. Why?

1. Accidental or embarrassing situations :
We should not laugh at an accidental situation, as people feel embarrassed and feel hurt.

4. Funny pantomimes and stand up comedies.
This is fair and ethical to laugh at because it is performed for the audience to laugh and enjoy the show.

7. Humorous Movies.
People enjoy going to a humorous movie, as they get relaxed for a few hours from their stressful life. So it is fair and ethical to laugh at these humorous movies.

In a certain code ‘extremely’ is written as XKDLDQSWD. Figure out the code and rewrite the following words in the same code.
Answers:

Hint: Write the previous letter of the alphabet given in a word and then write the letters in the reverse order.

I. Choose the Correct Answers.

Question 4.
She told everyone about how Mahesh dropped her _______
(a) carefully
(b) suddenly
(c) abruptly
(d) carelessly
Answer:
(d) carelessly

IV. Read the Given Passage And Answer The Questions.

1. “Well”, sniffed Ms. English, “this boy”, she pointed at Mahesh, “brought me home a few months back, but never bothered to cover me properly with the nice brown paper his father had brought”.

Question a.
Who it referred Hera a* ‘this boy’?
Answer:
Mahesh is referred here.

Question b.
What was the charge made against Mahesh by Ms, English?
Answer:
Mahesh had ill-treated her by not covering the book properly.

Question c.
His father never bothered to cover with brown paper. Is It true or falie?
Answer:
False.

2. The Master Notebook got hold over himself and continued, “It started a few weeks back. Mahesh was solving some problems in Mathematics, one of them was tougher than others and he failed to solve it. Can you imagine how he vented his anger? Well, he threw me against the wall!”

Question b.
Who threw Mm?
Answer:
Mahesh threw him against the wall.

3. Yes! There was the battered bag on the floor, the books, half on the floor and others stuffed in the bag. But what was this? The English book was lying near his pillow and seemed to smile at him! Mahesh’s mother was astonished to see him rushing through the chores and then sitting down to glue and cover his English book that very morning! Next year Mahesh Kumar got the prize for the ‘BestLooked-After Books’.

Question b.
What do you mean by the word’chores’?
Answer:
‘Chores’ means a routine duty or task.

V. Rearrange the Following Jumbled Sentences in the Correct Order.

Question 1.
Why was the audience stunned? Did Mahesh realize his mistake?
Answer:
The audience was stunned as Ms. English was ill-treated by Mahesh. She wore a pretty dress, when she came to his house. But after a few months, her dress was unrecognizable, covered with ink and grease spots, mercilessly dog-eared and her two comers were chewed away. She looked worn out. Tears rolled down her cheeks. She told everyone how Mahesh dropped her carelessly, stuffed her any how in his crammed bag, sometimes next to the lunch box dripping with oil. Mahesh turned red as many pairs of eyes glared at him. He realised his mistake and wondered why he had not listened to his mother, who had told him many times to take care of his books.

Question 2.
What was pathetic about the young Master Notebook? What was the verdict of the Justice Mathematics?
Answer:
A few weeks back, Mahesh was solving some problems in Mathematics. One of them was tougher than others and he failed to solve it. He vented his anger by throwing the notebook against the wall. It was a pathetic situation to Master notebook. Everyone was shocked and they started talking at once. Justice Mathematics became red with anger, as he banged the hammer loudly. He asked the victims to give him the punishment. The Master notebook, Mr. Pencil, Mr. School bag and Mr. Geography suggested different punishments. But they all agreed to a punishment of jumping on Mahesh together, till he yells for mercy. Even Justice Mathematics got up from his chair to join the gang.

This story ‘Brought to book’ written by Madhumita Gupta insists on the proper maintenance of books and note books by the students. Mahesh dreams that he had been taken to the court to be punished for his ill-treatment of his books and notebooks.

The story begins with Justice Mathematics striking the hammer for silence in the court. He glared at Mahesh and the crowd and called for the first witness. Mahesh chewed his nails nervously. Ms. English, the first witness, complained to him that she wore a pink and grey dress, when she came to the house of Mahesh. But at present, she looked unrecognizable, covered with ink, grease spots, mercilessly dog-eared and the two comers chewed away. She looked worn out and tears rolled down her cheeks. She told the judge that Mahesh brought her home a few months back, but never bothered to cover her properly with the nice brown paper, that his father had brought.

Though he was scolded and punished by his teacher for that, he did not bother to rectify himself. He mined her looks by dropping her carelessly, stuffed her anyhow in his crammed bag and sometimes stuffed her next to the lunch box dripping with oil. Listening to all this, Mahesh got worried and realised his mistake of not listening to his mother’s advice to take care of his books. He was otherwise a good boy and even managed to stay within the first five ranks in class. But he was extremely lazy.

Next Mr. Geography complained that he was in a worse condition than Ms. English. He had no cover, the content page was hanging in and the maps were filled mercilessly with colours. He envied his brother who belonged to Shobitha. She handled him neatly. Mr. Pencil box complained that Mahesh never cleaned it. He sometimes chewed him whenever he got stuck for an answer. The school bag complained about his broken straps and buckles. Master Notebook complained that he threw him against the wall, as he failed to solve a problem in Mathematics. So, finally all of them decided to punish him by thrashing him.

When everyone was almost upon him, Ms. English asked the Justice Mathematics to give Mahesh a second chance because that was his first offence and he deserved a little consideration. The others saw reason and slowly backed off. Suddenly he heard his Mother shouting at him to get up. It was a dream. He got up and covered all his books. The following year, Mahesh Kumar got the prize for the “Best Looked-After books”.