Choose the most appropriate answer from the given four ‘alternatives and write the option code with the corresponding answer.

Question 1.
Bundling two values together into one can be considered as
(a) Pair
(b) Triplet
(c) Single
(d) Quadrat
Answer:
(a) Pair

Question 9.
A variable prefixed with double underscore is
(a) private
(b) public
(c) protected
(d) static
Answer:
(a) private

Question 11.
The SQL command to make a database as current active database is
(a) CURRENT
(b) USE
(c) DATABASE
(d) NEW
Answer:
(b) USE

Question 16.
What do you mean by Namespaces?
Answer:
Namespaces are containers for mapping names of variables to objects.

Question 17.
What is searching? Write its types.
Answer:
A search algorithm is the step-by-step procedure used to locate specific data among a collection of data. Types of searching algorithms are:

Question 18.
Define Operator and Operand.
Answer:
In computer programming languages operators are special symbols which represent computations, conditional matching etc. The value of an operator used is called operands. Operators are categorized as Arithmetic, Relational, Logical, Assignment etc. Value and variables when used with operator are known as operands.

for loop:
‘for loop’ is the most comfortable loop. It is also an entry check loop. The condition is checked in the beginning and the body of the loop(statements-block 1) is executed if it is only True otherwise the loop is not executed.

Question 23.
What are the steps involved in file operation of Python?
Answer:
When you want to read from or write to a file ,you need to open it. Once the reading is over it needs to be closed. So that, resources that are tied with the file are freed. Hence, in Python, a file operation takes place in the following order.
Step 1 → Open a file
Step 2 → Perform Read or write operation
Step 3 → Close the file

Question 25.
Why strlen is called pure function?
Answer:
strlen (s) is called each time and strlen needs to iterate over the whole of ‘s’. If the compiler is smart enough to work out that strlen is a pure function and that ‘s’ is not updated in the loop, then it can remove the redundant extra calls to strlen and make the loop to execute only one time. This function reads external memory but does not change it, and the value returned derives from the external memory accessed.

Question 26.
Which strategy is used for program designing? Define the strategy.
Answer:
We are using here a powerful strategy for designing programs: ‘wishful thinking’.
Wishful Thinking is the formation of beliefs and making decisions according to what might be pleasing to imagine instead of by appealing to reality.

Question 27.
Which jump statement is used as placeholder? Why?
Answer:
pass statement is generally used as a placeholder. When we have a loop or function that is to be implemented in the future and not now, we cannot develop such functions or loops with empty body segment because the interpreter would raise an error. So, to avoid this we can use pass statement to construct a body that does nothing.

Question 28.
What are the points to be noted while defining a function?
Answer:

Question 31.
Explain Cartesian product with a suitable example.
Answer:
PRODUCT OR CARTESIAN PRODUCT (Symbol: X)
Cross -product is a way of combining two relations. The resulting relation contains, both relations being combined.
A × B means A times B, where the relation A and B have different attributes.
This type of operation is helpful to merge columns from two relations. 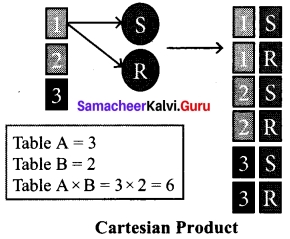 Question 32.
Write a short note on (i) fetchallf) (ii) fetchonef) (iii) fetchmany
Answer:
cursor.fetchall() -fetchall ()method is to fetch all rows from the database table.
cursor. fetchoneQ – The fetchone () method returns the next row of a query result set or None in case there is no row left.
cursor, fetchmany() method that returns the next number of rows (n) of the result set

Question 33.
Write a Python code to display the following chart. 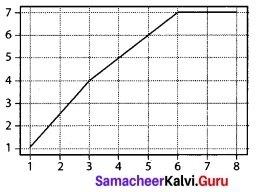 (b) Explain input() and print() functions of Python with example.
Answer:
Input() function:
In Python, input() function is used to accept data as input at run time. The syntax for input() function is,
Variable = input (“prompt string”)
Where, prompt string in the syntax is a statement or message to the user, to know what input can be given.
If a prompt string is used, it is displayed on the monitor; the user can provide expected data from the input device. The input() takes whatever is typed from the keyboard and stores the entered data in the given variable. If prompt string is not given in input() no message is displayed on the screen, thus, the user will not know what is to be typed as input.
Example 1:
input() with prompt string
>>> city = input (“Enter Your City: ”)
Enter Your City: Madurai
>>> print (“I am from“, city)
I am from Madurai

The print () evaluates the expression before printing it on the monitor. The print () displays an entire statement which is specified within print (). Comma (,) is used as a separator in print () to print more than one item.

Question 35 (a).
Write a detail note on for loop in Python.
Answer:
for loop
for loop is the most comfortable loop. It is also an entry check loop. The condition is checked in the beginning and the body of the loop(statements-block 1) is executed if it is only True otherwise the loop is not executed.
Syntax:
for counter_variable in sequence:
statements block 1
# optional block
[else:
statements block 2]
The counter_variable mentioned in the syntax is similar to the control variable that we used in the for loop of C++ and the sequence refers to the initial, final and increment value. Usually in Python, for loop uses the range() function in the sequence to specify the initial, final and increment values. range() generates a list of values starting from start till stop-1. 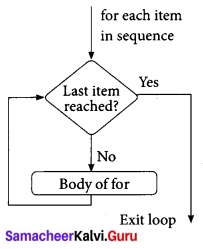 (b) Explain the different types of functions in Python with example.
Answer:
Types of Functions
Basically, we can divide functions into the following types: 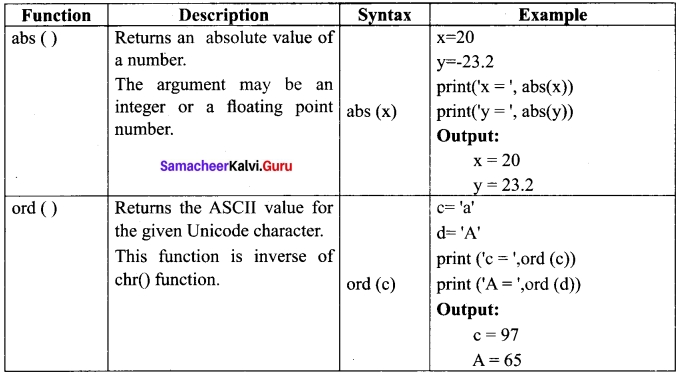 4. Recursive functions
When a function calls itself is known as recursion. Recursion works like loop but sometimes it makes more sense to use recursion than loop. You can convert any loop to recursion.
Example:
def fact(n):
if n = = 0:
return 1
else:
return n * fact (n – 1)
print (fact (0))
print (fact (5))
Output:
1
120

Question 36 (a).
Explain about the find() function in Python with example.
Answer: 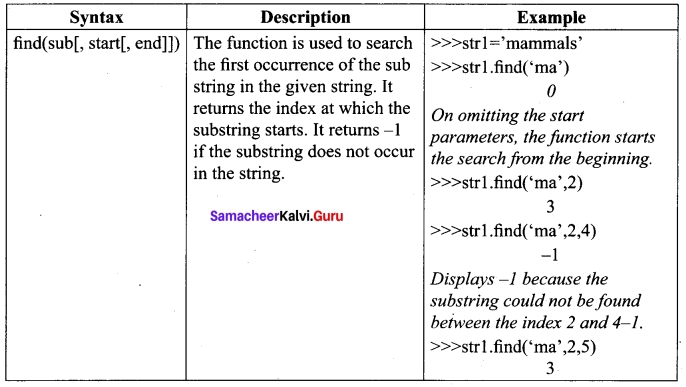 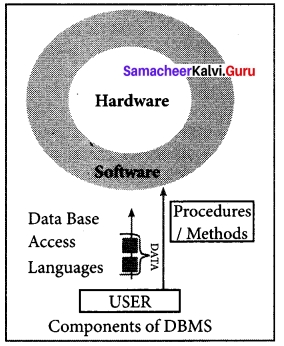 The Database Management System can be divided into five major components as follows:

1. Hardware: The computer, hard disk, I/O channels for data, and any other physical component involved in storage of data.
2. Software: This main component is a program that controls everything. The DBMS software is capable of understanding the Database Access Languages and interprets into database commands for execution.
3. Data: It is that resource for which DBMS is designed. DBMS creation is to store and utilize data.
4. Procedures/Methods: They are general instructions to use a database management system such as installation of DBMS, manage databases to take backups, report generation, etc.
5. DataBase Access Languages: They are the languages used to write commands to access, insert, update and delete data stored in any database.

(b) What are the components of SOL? Write the commands in each.
Answer:
Components of SQL
SQL commands are divided into five categories: 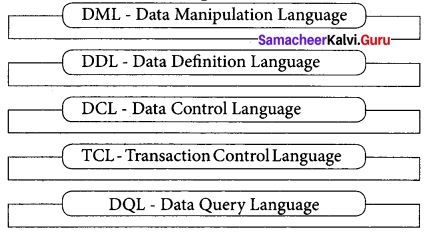 Question 38 (a).
Explain the following operators in Relational Algebra with suitable example
1. Union, (∪) 20 Intersection (∩)
UNION (Symbol :∪)
It includes all tuples that are in tables A or in B. It also eliminates duplicates. Set A Union Set B would be expressed as A ∪ B
Example 2
Consider the following tables 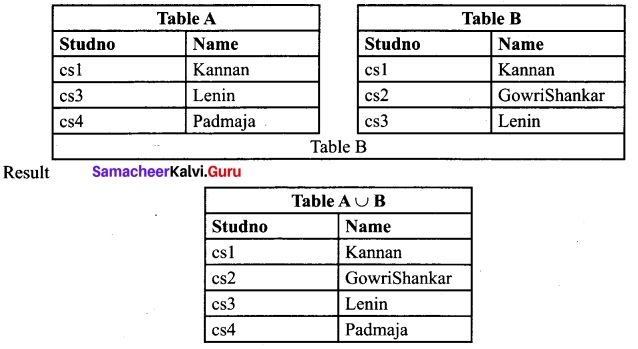 INTERSECTION (symbol: ∩) A ∩ B
Defines a relation consisting of a set of all tuple that are in both in A and B. However, A and B must be union-compatible.
Example 5 (using Table B) 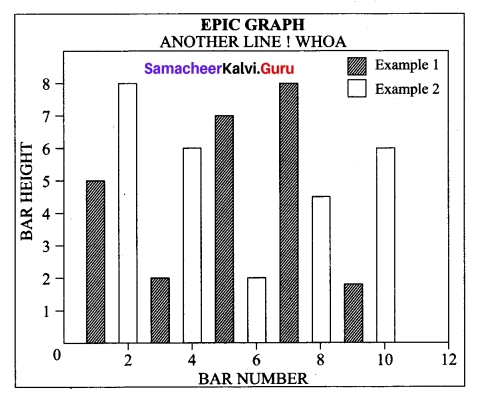