Question 1.
The members that are accessible from within the class and are also available to its subclasses is called……….
(a) public
(b) protected
(c) secured
(d) private
Answer:
(b) protected

Question 17.
What are the escape sequences for Backslash, Newline, Tab, Single quotes.
Answer:

Question 18.
Define composition.
Answer:
The value returned by a function may be used as an argument for another function in a nested manner. This is called composition.

Question 20.
Write note on center function, center (width, fillchar)
Answer:
Returns a string with the original string centered to a total of width columns and filled with fillchar in columns that do not have characters.

Question 23.
What is data consistency?
Answer:
On live data, it is being continuously updated and added, maintaining the consistency of data can become a challenge. But DBMS handles it by itself. Data Consistency means that data values are the same at all instances of a database.

Question 24.
Define database.
Answer:
Database is a repository collection of related data organized in a way that data can be easily accessed, managed and updated. Database can be a software or hardware based, with one sole purpose of storing data.

Question 26.
What are the steps to do Dynamic programming?
Answer:

Question 27.
Write note on delimiters.
Answer:
Python uses the symbols and symbol combinations as delimiters in expressions, lists, dictionaries and strings. Following are the delimiters.

Question 31.
Explain the commands which comes under TCL.
Answer:
SQL command which come under Transfer Control Language are:

4. Within the header and each record, there may be one or more fields, separated by commas. Spaces are considered part of a field and should not be ignored. The last field in the record must not be followed by a comma. For example: Red , Blue

6. Fields containing line breaks (CRLF), double quotes, and commas should be enclosed in double-quotes.
For example:
Red, ”, “, Blue CRLF # comma itself is a field value. So it is enclosed with double quotes Red, Blue , Green.

(b) Write a program to add a prefix text to all the lines in a string.
Answer:
import textwrap
text =
‘”Strings are immutable. Slice is a
substring of a main string. Stride is a third argument in slicing operation'”
text_without_lndentation = textwrap.dedent(text)
wrapped = textwrap.fill(text_without_Indentation, width = 50)
print(textwrap.indent(wrapped, ‘*’)
print()
Output:

Question 35 (a).
Explain the purpose of range with an example.
Answer:
The range( ) is a function used to generate a series of values in Python. Using range( ) function, you can create list with series of values. The range() function has three arguments.

Question 36 (a).
Explain various set operations.
Answer:
As we leamt in mathematics, the python is also supports the set operations such as Union, Intersection, difference and Symmetric difference.

(i) Union: It includes all elements from two or more sets
In python, the operator | is used to union of two sets. The function union() is also used to join two sets in python.
Example:
Program to Join (Union) two sets using union operator 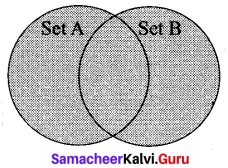 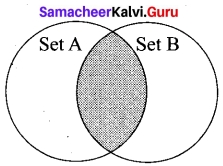 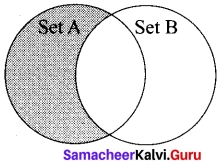 (iv) Symmetric difference: It includes all the elements that are in two sets (say sets A and B) but not the one that are common to two sets.
The caret (^) operator is used to symmetric difference set operation in python. The function symmetric_difference() is also used to do the same operation.
Example: 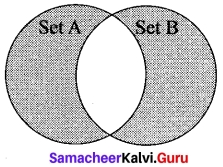 (b) Write a program that accept a string from the user and display the same after removing vowels from it.
Answer:
def rem_vowels(s):
temp_str = ”
for i in s:
if i in “aAeEiIoOuU”:
pass
else:
temp_str+ = i
print (“The string without vowels: “, temp str)
strl= input (“Enter a String: “)
rem_vowels (strl)
Output:
Enter a String: Mathematical foundations of Computer Science The string without vowels: Mthmtcl fndtns f Cmptr Scnc