Question 6.
The temperature of a wire is doubled. The Young’s modulus of elasticity………
(a) will also double
(b) will become four times
(c) will remain same
(d) will decrease
Answer:
(d) will decrease

Question 10.
If the temperature of the wire is increased, then the young’s modulus will………
(a) remains the same
(b) decrease
(c) increase rapidly
(d) increase by very small amount
Answer:
(b) decrease

Question 13.
The sample of gas expands from v1 to v2. The amount of work done by the gas is greatest, when the expansion is, ………..
(a) adiabatic
(b) isobaric
(c) isothermal
(d) equal in all cases
Answer:
(c) isothermal

Answer any six questions in which Q. No 23 is compulsory. 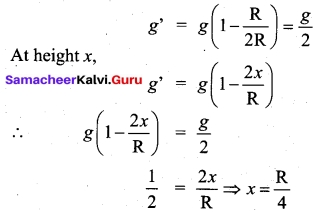 Question 20.
Give any two applications of viscosity.
Answer:

Question 22.
A sphere contracts in volume by 0.01% when taken to the bottom of sea 1 km deep. Find the bulk modulus of the material of the sphere.
Answer:
Here 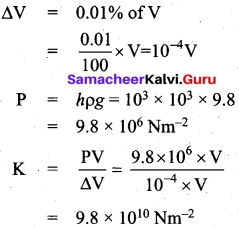 Question 23.
State the second law of thermodynamics in terms of entropy.
Answer:
“For all the processes that occur in nature (irreversible process), the entropy always increases. For reversible process entropy will not change”. Entropy determines the direction in which natural process should occur.

Question 26.
Discuss the properties of scalar and vector products.
Properties of vector (cross) product.
(i) The vector product of any two vectors is always another vector whose direction is perpendicular to the plane containing these two vectors, i.e., orthogonal to both the vectors \(\vec{A}\) and \(\vec{B}\) even though the vectors \(\vec{A}\) and \(\vec{B}\) may or may not be mutually orthogonal.

Question 27.
A block of mass m slides down the plane inclined at an angle 60° with an acceleration g/2. Find the co-efficient of kinetic friction.
Answer:
Kinetic friction comes to play as the block is moving on the surface.
The forces acting on the mass are the normal force perpendicular to surface, downward gravitational force and kinetic friction fk along the surface.
Along the x-direction.

There is no motion along the y-direction as normal force is exactly balanced by the mg cos θ.
mg cos θ = N mg/2 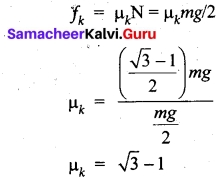 Question 28.
Write a note on work done by a variable force?
Answer: 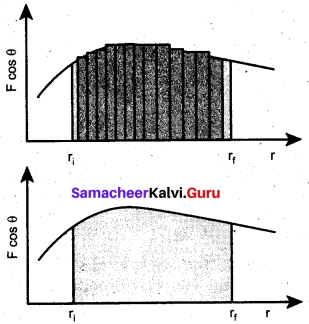 Question 29.
Why do we have seasons on Earth?
Answer:
The common misconception is that ‘Earth revolves around the Sun, so when the Earth is very far away, it is winter and when the Earth is nearer, it is summer’. Actually, the seasons in the Earth arise due to the rotation of Earth around the Sun with 23.5° tilt. Due to this 23.5° tilt, when the northern part of Earth is farther to the Sun, the southern part is nearer to the Sun. So when it is summer in the northern hemisphere, the southern hemisphere experience winter. 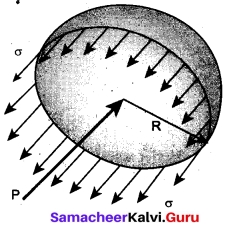 Question 31.
Consider the Earth as a homogeneous sphere of radius R and a straight hole is bored in it through its centre. Show that a particle dropped into the hole will execute a simple harmonic motion such that its time period is
Answer:
T = 2π\(\sqrt{\frac{R}{g}}\)
Oscillations of a particle dropped in a tunnel along the diameter of the earth:
Consider earth to be a sphere of radius R and centre O. A straight tunnel is dug along the diameter of the earth. Let lg’ be the value of acceleration due to gravity at the surface of the Earth. 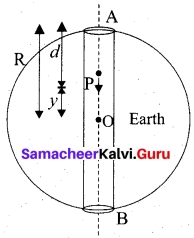 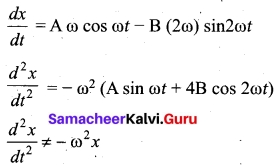 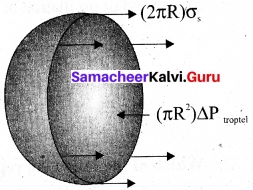 Question 34 (a).
Explain in detail the idea of weightlessness using lift as an example.
Answer:
When a man is standing in the elevator, there are two forces acting on him.
1. Gravitational force which acts downward. If we take the vertical direction as positive y direction, the gravitational force acting on the man is \(\vec{F}_G\)G = – mg\(\hat{j}\)
2. The normal force exerted by floor on the man which acts vertically upward, \(\vec{N}\) = N\(\hat{j}\)

Weightlessness of freely falling bodies: Freely falling objects experience only gravitational force. As they fall freely, they are not in contact with any surface (by neglecting air friction). The normal force acting on the object is zero. The downward acceleration is equal to the acceleration due to the gravity of the Earth, i.e., (a = g)

(b) How will you determine the velocity of sound using resonance air column apparatus?
Answer:
The resonance air column apparatus is one of the simplest techniques to measure the speed of sound in air at room temperature. It consists of a cylindrical glass tube of one meter length whose one end A is open and another end B is connected to the water reservoir R through a rubber tube as shown in figure. This cylindrical glass tube is mounted on a vertical stand with a scale attached to it. The tube is partially filled with water and the water level can be adjusted by raising or lowering the water in the reservoir R. The surface of the water will act as a closed end and other as the open end.

Question 35 (a).
Briefly explain the origin of friction. Show that in an inclined plane, angle of friction is equal to angle of repose.
Answer:
If a very gentle force in the horizontal direction is given to an object at rest on the table it does not move. It is because of the opposing force exerted by the surface on the object which resists its motion. This force is called the frictional force.

During the time of Newton and Galileo, frictional force was considered as one of the natural forces like gravitational force. But in the twentieth century, the understanding on atoms, electron and protons has changed the perspective. The frictional force is actually the electromagnetic force between the atoms on the two surfaces. Even well polished surfaces have irregularities on the surface at the microscopic level. 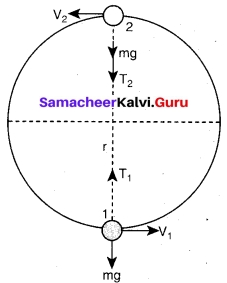 Question 36 (a).
What are the characteristics of stationery waves? Give the laws of transverse vibrations in a stretched string.
Characteristics of stationary waves:
1. Stationary waves are characterised by the confinement of a wave disturbance between two rigid boundaries. This means, the wave does not move forward or backward in a medium (does not advance), it remains steady at its place. Therefore, they are called “stationary waves or standing waves”.
2. Certain points in the region in which the wave exists have maximum amplitude, called as anti-nodes and at certain points the amplitude is minimum or zero, called as nodes.
3. The distance between two consecutive nodes (or) anti-nodes is \(\frac{λ}{2}\).
4. The distance between a node and its neighbouring anti-node is \(\frac{λ}{4}\).
5. The transfer of energy along the standing wave is zero.

Laws of transverse vibrations in stretched strings: There are three laws of transverse vibrations of stretched strings which are given as follows:
(i) The law of length: For a given wire with tension T (which is fixed) and mass per unit length µ (fixed) the frequency varies inversely with the vibrating length. Therefore,
f ∝ \(\frac{1}{l}\) ⇒ f = \(\frac{c}{l}\)
⇒ l × f = C, where C is a constant

(ii) The law of tension: For a given vibrating length l (fixed) and mass per unit length µ (fixed) the frequency varies directly with the square root of the tension T.
f ∝ √T
⇒ A√T, where A is constant

Work done in an isothermal process: Consider an ideal gas which is allowed to expand quasi-statically at constant temperature from initial state (Pii) to the final state (Pf, Vf). We can calculate the work done by the gas during this process. The work done by the gas,
W = \(\int_{v_{i}}^{v_{f}} \mathrm{p} d \mathrm{v}\) ……(1)
As the process occurs quasi-statically, at every stage the gas is at equilibrium with the surroundings. Since it is in equilibrium at every stage the ideal gas law is valid. Writing pressure in terms of volume and temperature,
P = \(\frac{µRT}{V}\) …….(2)
Substituting equation (2) in (1) we get

Similarly for an isothermal compression, the area under the PV graph is equal to the work done on the gas which turns out to be the area with a negative sign. 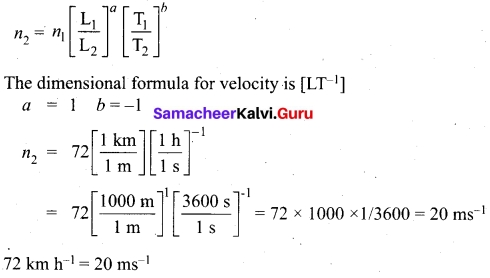 Question 38 (a)
(i) A uniform sphere of mass 200 g rotates on a horizontal surface without shipping. If centre of the sphere moves with a velocity 2.00 cm/s then its kinetic energy is?
As the sphere rolls without slipping on the plane surface, it’s angular speed about the center is w = \(\frac{v_{\mathrm{CM}}}{r}\)
kinetic energy, 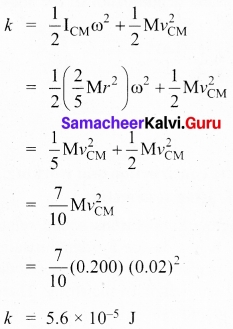 (ii) Derive the expression for kinetic energy in rotating object and also derive the relation between rotational kinetic energy and angular momentum.
Let us consider a rigid body rotating with angular velocity co about an axis as shown in figure. Every particle of the body will have the same angular velocity co and different tangential velocities v based on its positions from the axis of rotation. 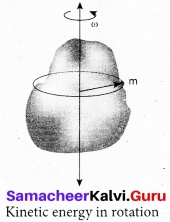 (b) what is a sonometer? Give its construction and working. Explain how to determine the frequency of tuning fork using sonometer.
Answer:
Stationary waves in sonometer:
Sono means sound related, and sonometer implies sound – related measurements. It is a device for demonstrating the relationship between the frequency of the sound produced in the transverse standing wave in a string, and the tension, length and mass per unit length of the string. Therefore, using this device, we can determine the following quantities:

the frequency of the tuning fork or frequency of alternating current the tension in the string the unknown hanging mass.

Construction:
The sonometer is made up of a hollow box which is one meter long with a uniform metallic thin string attached to it. One end of the string is connected to a hook and the other end is connected to a weight hanger through a pulley as shown in figure. Since only one string is used, it is also known as monochord. The weights are added to the free end of the wrire to increase the tension of the wfire. Two adjustable wooden knives are put over the board, and their positions are adjusted to change the vibrating length of the stretched wire.