Question 2.
The relationship between the price of a commodity and the supply of commodity is ………………….
(a) negative
(b) positive
(c) zero
(d) increase
Answer:
(b) positive

Question 15.
Identify the cause for rural indebtedness in India.
(a) Poverty
(b) High population
(c) High productivity
(d) Full employment
Answer:
(a) Poverty

Question 25.
What is the heritage tourism?
Answer:

Question 26.
Classify the factors of production.
(a) Land (b) Labour (c) Capital and (d) Organisation
Answer:
(a) Land: In Economics, land means all gifts of Nature owned and controlled by human beings which yield an income.
(b) Labour: Labour means manual labour or unskilled work.
(c) Capital: “Capital consists of all kinds of wealth other than free gifts of nature, which yield income”. Bohm-Bawerk defines it as ‘a produced means of production’.
(d) Organisation: The man behind organizing the business is called as ‘Organizer’ or ‘Entrepreneur’.

Question 27.
What do you mean by Micro Finance?
Answer:

Question 28.
Define Cost.
Answer:
Cost refers to the total expenses incurred in the production of a commodity. Cost analysis refers to the study of beheriour of cost in relation to one or more production criteria namely size of output, scale of production prices of factors and other economic variables.

Question 29.
What are the major ports in Tamil Nadu?
Answer:

Question 31.
What is GST advantages?
Answer:

Question 34.
Explain the prospect for development of tourism.
Answer: 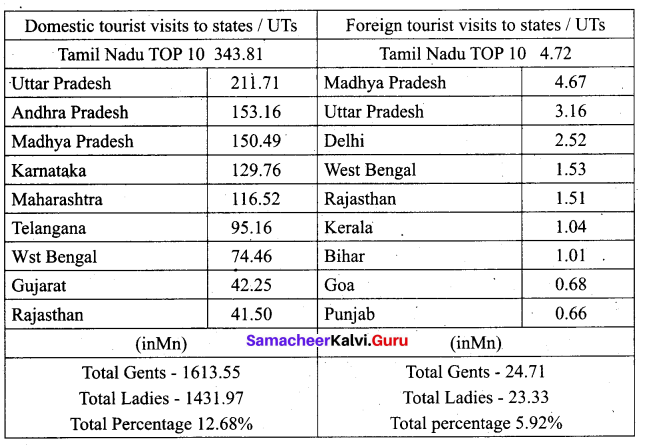 Question 38.
State Ambedkar’s Economic ideas on agricultural economics.
Answer:
In the 1918, Ambedkar published a paper “Small Holding in India and their Remedies”. Citing Adam Smith’s “Wealth of Nations”, he made a fine distinction between “Consolidation of Holdings” and Enlargement of Holdings”.

Question 41.
(a) Explain the objectives and characteristics of SEZs.
Answer:

Question 42.
(a) What are the characteristics of labour?
Answer:

(b) Explain the Keynesian theory of Interest.
Answer:

Motives of Demand for Money:
According to Keynes, there are three motives for liquidity preferences. They are:

Question 43.
(a) Write a short note on Total Revenue.
Answer:
Total revenue is the amount of income received by the firm from the sale of its products. It is obtained by multiplying the price of the commodity by the number of units sold. 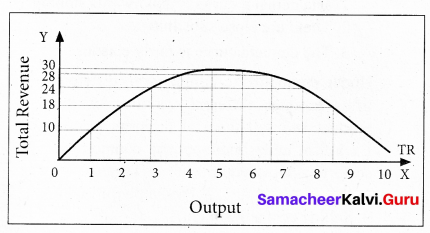 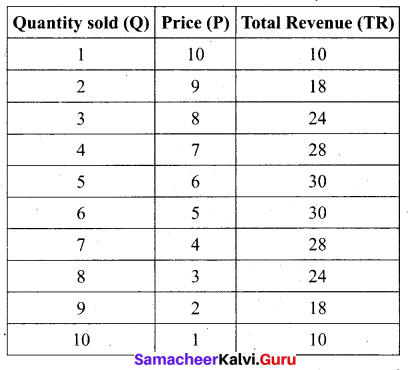 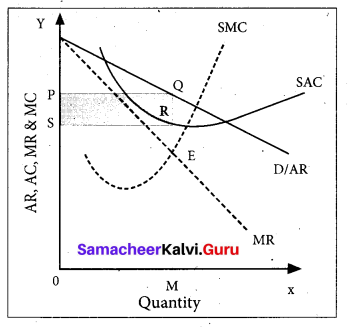 Short-run equilibrium:
The profit maximisation is achieved when MC = MR.
‘OM’ is the equilibrium output. ‘OP’ is the equilibrium price. The total revenue is ‘OMQP’. And the total cost is ‘OMRS’.
Therefore, total profit is ‘PQRS’. This is super normal profit under short-run. But under differing revenue and cost conditions, the monopolistically competitive firms many incur loss.

As shown in the diagram, the AR and MR curves are fairly elastic. The equilibrium situation occurs at point ‘E’,
where MC = MR
and MC cuts MR from below. 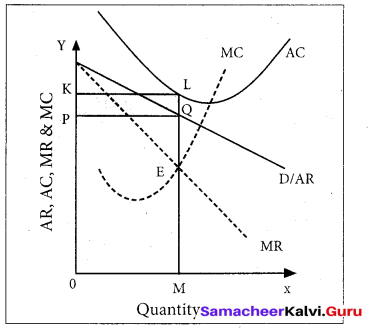 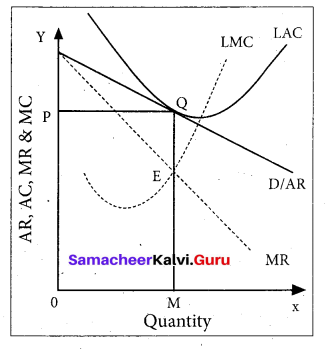 In the long run AR curve is more elastic or flatter, because plenty’ of substitutes are available.
Hence, the firms will earn only normal profit.

Where, Q = output; A = positive constant; K = capital; L = Labor a and (3 are positive fractions showing, the elasticity coefficients of outputs for the inputs labor and capital, respectively.
β = (1 – α) since α + β = 1. denoting constant returns to scale.

(b) Bring out Jawaharlal Nehru’s contribution to the idea of economic development.
Answer:
Assumptions of Simple Income Determination:

(i) Democracy and Secularism:

Question 45.
(a) Discuss about the Indian economy during British Period.
Answer:
Indian Economy during the British period:

Question 46.
(a) Explain the “Abolition of MRTP Act”.
Answer:

(b) What are the limitations of “LPG”.
Answer:

Liberalization measures, when effectively enforced, favour an unrestricted entry offoreign companies in the domestic economy. Such an entry prevents the growth of the local manufacturers.

Privatization measures favour the continuance of the monopoly power. Only the powerful people can sustain in business markets. Social justice cannot be easily established and maintained. As a result, the disparities tend to widen among people and among regions.

The important features of Marshall’s definition are:

Paul Samuelson defines economics as “the study of how men and society choose, with or without the use of money, to employ scarce productive resources which could have alternative uses to produce various commodities over time, and distribute them for consumption, now and in the future among various people and groups of society”.

The major implications of this definition are as follows:

Definition:
Marshall states the law as ,“ If a person has a thing which he can put to several uses, he will distribute it among these uses in such a way that it has the same marginal utility in all. For, if it had a greater marginal utility in one use than another he would gain by taking away some of it from the second use and applying it to first”.

Illustration:
This law can be illustrated with the help of table. Let us assume that the consumer has a given income of ₹ 11. He wants to spend this entire income i.e. ₹ 11] on Apple and Orange. The price of an Apple and the price of an orange is ₹ 1 each. 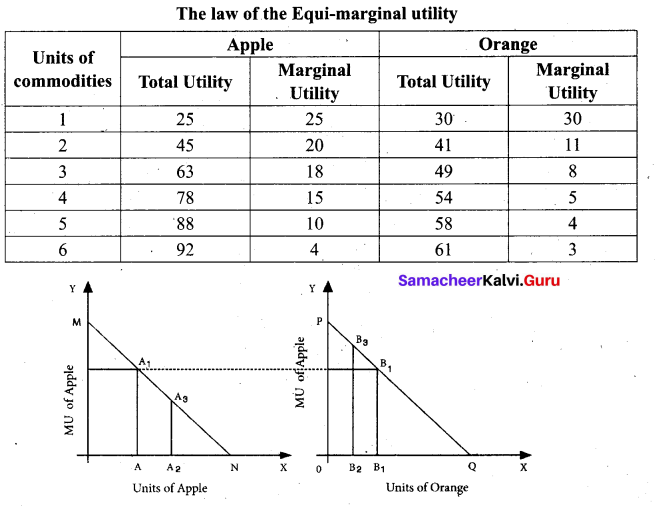 If the consumer wants to attain maximum utility, he should buy 6 units of apples and 5 units of oranges, so that she can get [92 + 58] = 150 units. No other combination of Apple and Orange can give higher than 150 utilities.