Answer all the Questions.
Choose the most suitable answer from the given four alternatives.

Correct statement: For n = 1, the electron has more negative energy than it does for n = 6 which means that the electron is strongly bound in the smallest allowed orbit.
Answer:

Hypophosphorous acid on reaction with D2O, only one hydrogen is replaced by deuterium and hence it is mono basic. 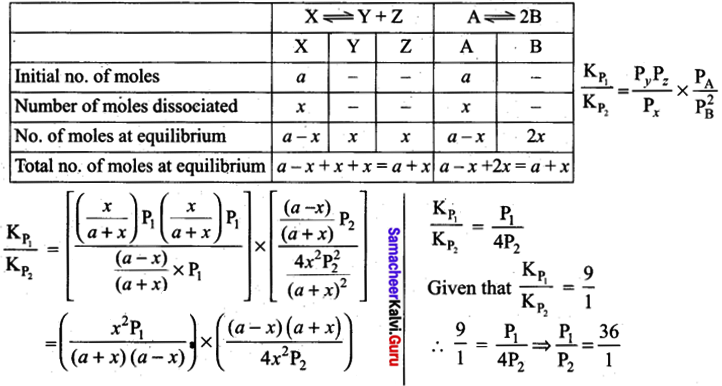 Question 12.
Consider the following statement.
(i) Covalent bonds .are break into two different ways.
(ii) They are Homolytic and Heterolytic cleavage.
(iii) During the fission of a covalent bond, organic compounds form a new organic molecules. Which of the above statement is/are not correct?
(a) (i) only
(b) (i) and (ii)
(c) (iii) only
(d) (ii) and (iii)
Answer:
(c) (iii) only

Question 15.
Which of the following is carcinogenic and causes irritation in eyes and mucous membranes?
(a) PAH
(b) THF
(c) CO
(d) PAN
Answer:
(a) PAH

Question 16.
Which is considered as to be Earth’s protective umbrella? Why?
Answer:

Question 18.
How will you test sulfur present in organic compounds?
Answer:
To a portion of the Lassaigne’s extract, freshly prepared sodium nitroprusside solution is added. If deep violet or purple colour is formed, the presence of sulfur is confirmed.

So N2 has the highest bond order.

Question 21.
A sample of gas has a volume of 8.5 dm3 at an unknown temperature. When the sample is submerged in ice water at 0°C, its volume gets reduced to 6.37 dm3. What is its initial temperature?
Answer:

Question 23.
What is water – gas shift reaction?
Answer:
The carbon monoxide of water gas can be converted to carbon dioxide by mixing the gas mixture with more steam at 400°C and passed over a shift converter containing iron/copper catalysts. This reaction is called water-gas shift reaction.
CO + H2O → CO2 + H2↑ 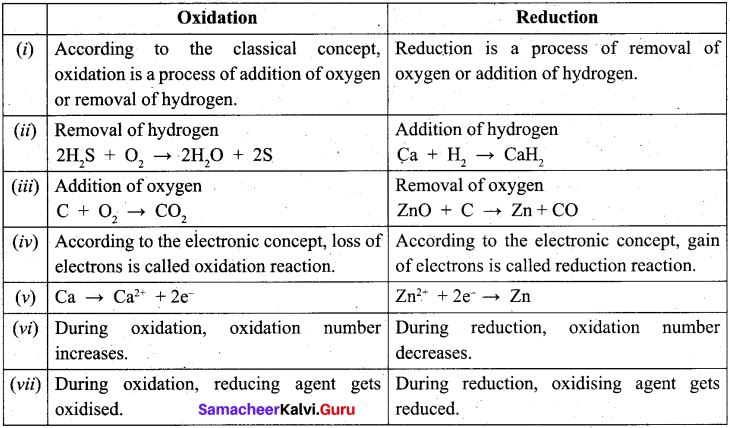 Question 26.
Why there is a need for classification of elements?
Answer:

Question 28.
Discuss briefly the similarities between Be and Al.
Answer: 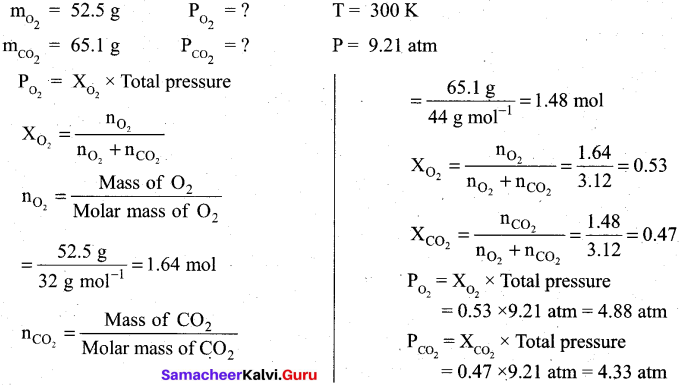 Question 30.
Why He2 molecule does not exist?
Answer:
Diatomic Helium molecule, He2 (Hypothetical). The electron configuration of Helium (Z = 2) in the ground state is Is2. As each Helium atom contains two electrons, there will be 4 electrons in He2 molecule. Keeping in view the Aufbau principle and Pauli’s exclusion principle its electron configuration would be as follows.
He2 : (σls)2 (σls)2.
The molecular orbital energy level diagram of He2: 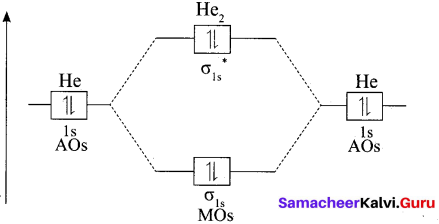 Question 31.
Write all the possible isomers of molecular formula C4H10O and identify the isomerisms found in them.
Answer: 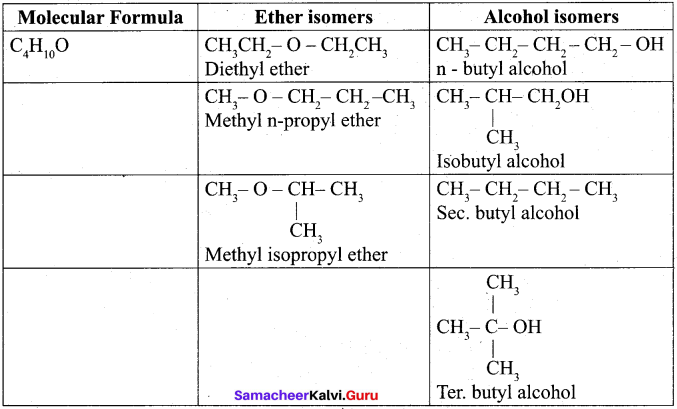 Question 32.
Explain how oxygen deficiency is caused by carbon monoxide in our blood? Give its effect.
Answer:

(ii) Limitations of Bohr’s atom model:
1. The Bohr’s atom model is applicable only to species having one electron such as hydrogen, Li2+ etc and not applicable to multi-electron atoms.
2. It was unable to explain the splitting of spectral lines in the presence of magnetic field (Zeeman effect) or an electric field (Stark effect).
3. Bohr’s theory was unable to explain why the electron is restricted to revolve around the nucleus in a fixed orbit in which the angular momentum of the electron is equal to nh/2π.

(b) (i) The small size of the Li+ ion means that it has a very high enthalpy of hydration and so lithium salts are much more soluble than the salts of other group 1. E.g. LiClO4 is upto 12 times more soluble than NaCIO4.

Question 35.
(a)-(i) Can a Vanderwaal’s gas with a = 0 be liquefied? Explain. (2)
(ii) Deep sea divers ascend slowly and breath continuously by time they reach the surface. Give reason. (3)

(b) (i) A reaction that does occur under the given set of conditions is called a spontaneous reaction. The expansion of a gas into a evacuated bulb is a spontaneous process, the reverse process that is gathering of all molecules into one bulb is not spontaneous. This example shows that processes that occur spontaneously in one direction cannot take place in opposite direction spontaneously.

Thus for an ideal gas, Cp is greater than Cv by the gas constant R.

(b) (i) What is a π – bond? (2)
(ii) Discuss the formation of N2 molecule using MO theory. (3)
Answer:
(a) (i) The law states that “At any instant, the rate of chemical reaction at a given temperature is directly proportional to the product of the active masses of the reactants at that instant.”
(ii) Vant hoff equation: This equation gives the quantitative temperature dependance of equilibrium constant K.

Equation (4) is known as differential form of van’t Hoff equation. On integrating the equation 4, between T1 and T2 with their respective equilibrium constants K1 and K2,

Equation (5) is knowi as integrated fónn of van’t Hoff equation. 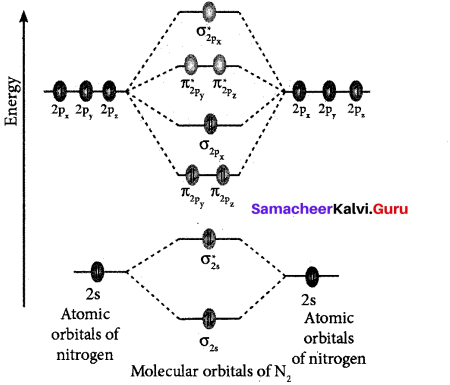 (b) (i) Electromeric effect.
1. The electromeric effect refers to the polarity produced in a multiple bonded compound when it is attacked by a reagent when a double or a triple bond is exposed to an attack by an electrophile the two n electrons which from the n bond are completely transferred to one atom or the other.

2. When a nucleophile approaches the carbonyl compound, the π -electrons between C and O is instantaneously shifted to the more electronegative oxygen. This make the carbon electron deficient and thus facilitating the formation of a new bond between the incoming nucleophile and the carbonyl carbon atom.

3. When an electrophile such as H+ approaches an alkene molecule the n electrons are instantaneously shifted to the electrophile and a new bond is formed between carbon and hydrogen. This makes the other carbon electron deficient and hence it acquires a positive charge.

Example:
1. n-propyl bromide on reaction with alcoholic KOH give propene. In this reaction hydrogen and Br are eliminated.

Question 38.
(a) An organic compound A of a molecular formula C3H6, reacts with HBr to give B which is the major product for this reaction. A again reacts with HBr in presence of benzoyl peroxide to give C. Identify A, B and C. Explain the reactions. (5)

(b) (i) Explain -The Bhopal Tragedy. (3)
(ii) What are the particulate that cause the pollutions in troposphere? (2)
Answer: 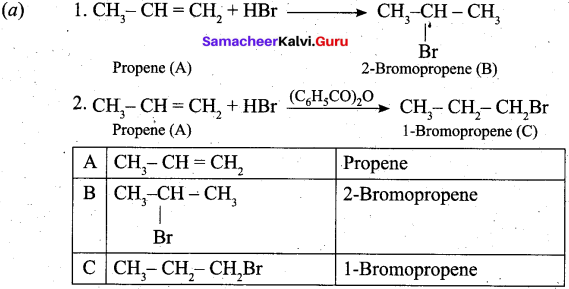 (b) (i) On 3rd Decembers, 1984 at Bhopal city in India, by the early morning, an explosion at Union Carbide pesticide plant released a cloud of toxic gas (Methyl isocyanate) CH3NCO into the air. Since the gas is twice as heavy as air, it did not drift away but formed a blanket over the surrounding area. It attacked people’s lungs and affect their breathing staying there or in the nearby areas. Thousands of people died and lives of many were ruined. The lungs, brain, eyes, muscles, as well as the gastrointestinal, neurological and immune systems of those people who survived, were severely affected.

They are classified according to