1. The primitive multi-cellular life first appeared in the age of ……………..
2. Hand axes and cleavers are the important tool types of the …………. culture.
3. The methods and techniques involved in the production of stone tools are called ………………… technology.
4. ………………… is known as the Middle Stone Age, as it is placed between the Palaeolithic and Neolithic.
Answers:
1. Proterozoic
2. Low Palaeolithic
3. lithic
4. Mesolithic period

III. Find out the correct statement.

Evolution Of Human And Society Prehistoric Period Book Back Answers Question 1.
(a) The concept ‘survival of the fittest’ contributed to the scientific understanding of human origins.
(b) The book “On the Origin of Species” was published by Herbert Spencer.
(c) Darwin’s theory of biological evolution connects with the process of natural selection.
(d) Geology is the study of lithic technology.
Answer:
(a) correct
(b) incorrect
(c) correct
(d) incorrect

Samacheer Kalvi 9th Social Book Answers Question 2.
(a) Among the great Apes Orangutan is genetically the closest to humans.
(b) The ancestors to humans were called Hominins and their origins have been traced to Africa.
(c) Flake is a small chip that has flaking on both sides.
(d) Acheulian is the main block of stone from which small1 chips are flaked by using a hammer stone.
Answer:
(a) incorrect
(b) correct
(c) incorrect
(d) incorrect

9th Social Book Back Answers Question 1.
Discuss how the age of speculation made humans become conscious and knowledgeable.
Answer:

9th New Social Book Back Answers Question 2.
Write a note on the impact of pastoralism on the prehistoric people in Tamil Nadu.
Answer:

Evolution Of Humans And Society Prehistoric Period Meaning In Tamil Question 3.
List out the features of Megalithic Burial types.
Answer:

Evolution Of Humans And Society – Prehistoric Period Notes Question 1.
Hominid and Hominins.
(a) Who are Hominids?
Answer:
Hominids refers to all the species of the modem and extinct great apes, which also includes humans.

(c) How are the modern humans known?
Answer:
Modem-humans are known as Homo sapiens.

(d) Name any one species of this tribe.
Answer:
Homo erectus – extinct Humans are the only living species.

(b) What is meant by Lithic Technology?
Answer:
‘Lith’ means stone. The methods and techniques involved in the production of stone tools are called lithic technology.

(c) What are Biface tools?
Answer:
Bifaces are tools that have flaking on both sides (bi = two, face = side).

(d) Name a few stone tools used by the human ancestors.
Answer:
Core is the main block of stone. Flake is a small chip removed from a large stone block. Levalloisian tools includes long blades and burins. Burin is a stone-made chisel with a sharp cutting edge.

Social Science Class 9 Guide Question 1.
The developments in the fields of agriculture, pottery and metal tools are considered a landmark in the life of Megalithic period- Substantiate.
Answer:

Question 1.
Mark the prehistoric sites on the world map.
Answer:
(i) The ancestors to humans were called Hominins and their origins have been traced to Africa.
(ii) You can draw the Prehistoric sites of human ancestors in Africa with the guidance of your teacher. 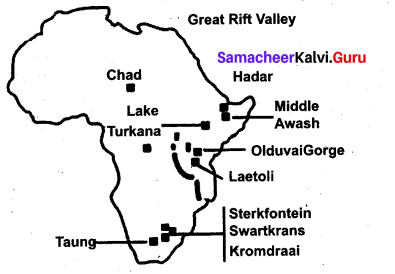 1. …………….. is the study of the human past through the analysis and interpretation of material remains.
(a) Geology
(b) Archaeology
(c) History
(d) None of the above
Answer:
(b) Archaeology

Question 2.
The beginning of history writing can be traced to the ancient ……………..
(a) Greeks
(b) Egyptians
(c) Romans
(d) Africans
Answer:
(a) Greeks

Question 6.
The ……………. was a formative period and the foundation for the Sangam Age.
(a) Iron Age
(b) Bronze Age
(c) Stone Age
(d) Age of Information Technology
Answer:
(a) Iron Age

Question 1.
Discuss when the earth was formed.
Answer:

Question 2.
Who proposed the idea of the Three Age system?
Answer:

Question 3.
The Great Rift valley in Africa has evidence for the Prehistoric period. Discuss.
Answer:

Question 4.
Write a short note on “Prehistoric cultures”.
Answer:
While the fossil bones are classified as various species such as Homo habilis, Homo erectus and Neanderthalensis, based on the lithic tools, cultures are assigned names such as Earliest Lithic, Assemblages, Oldowan Technology, Lower, Middle and Upper Palaeolithic and Mesolithic cultures.

Question 5.
Why were the Levalloisian tools called so?
Answer:

Question 6.
What was the main factor for the development of early civilisations?
Answer:

Question 7.
Describe the burials in the Sangam Age.
Answer:

V. Answer all the questions given under each caption.

(A) Oldest Museum.
Question 1.
Name the oldest museum, in the world.
Answer:
The museum of Ennigaldi Nanna in Mesopotamia.

Question 2.
When was it established?
Answer:
It was established in 530 BCE.

Question 3.
What are the tool types used by them?
Answer:
The tool types are scrapers, lunates and triangles.

Question 2.
Domestication of Animals and plants. A milestone in Human History. Explain.
Answer: