Lithosphere 2 Exogenetic Processes Question 1.
The disintegration or decomposition of rocks is generally called as …………………
(a) weathering
(b) erosion
(c) transportation
(d) deposition
Answer:
(a) weathering

Lithosphere 2 Exogenic Processes Question 2.
The process of the levelling up of land by means of natural agents.
(a) aggradation
(b) degradation
(c) gradation
(d) none
Answer:
(c) gradation

9th Std Social Science Guide Pdf English Medium Question 5.
Which one of the following is not a depositional feature of a glacier?
(a) cirque
(b) Moraines
(c) Drurrtlins
(d) Eskers
Answer:
(a) cirque

Social Guide For Class 9 Question 8.
……………… erosion is responsible for the formation of cirque.
(a) wind
(b) glacial
(c) river
(d) underground water
Answer:
(b) glacial

9th Social Science Guide Pdf Download Question 1.
Define weathering.
Answer:
Weathering is the disintegration and decomposition of materials of the earth’s crust by their exposure to the atmosphere.

9th Standard Social Book Question 3.
Mention the three courses of a river with any two land forms associated to each course.
Answer:
The course of a river is divided into

Class 9 Social Science Guide Question 5.
How does a cave differ from a sea arch?
Answer:

9th Geography Guide Question 7.
What do you mean by a hanging valley?
Answer:
These are valleys eroded by tributary glacier and that hangs over the main valley.

(b) Drumlin: Drumlins are deposits of glacial moraines that resemble giant inverted teaspoons (or) half cut eggs.
(c) Esker: Long narrow ridges composed of boulders gravel and sand deposited by streams of melting water which run parallel to a glacier are called eskers.

Chemical weathering: Disintegration and decomposition of rocks due to chemical reactions is called Chemical Weathering. This is predominantly high in the hot and humid regions such as the equatorial, tropical and sub tropical zones. Chemical weathering takes place through the processes of oxidation, carbonation, solution, and hydfation. The agents of Chemical weathering are Oxygen, Carbon-dioxide and Hydrogen.

Question 2.
Explain the erosional landformsformed by underground water.
Answer:
Most erosion takes plaice due to the process of solution. When rain water mixes with carbon- di-oxide and enters into a limestone region, it dissolves and destroys much of the limestone. As a result, landforms suph as Terra rossa, Lappies, sinkholes, swallow holes, dolines, uvalas, poljes, caves and caverns are formed.

Terra Rossa (Italian term for Red soil): Deposition of red clay soil on the surface of the Earth is due to the dissolution of limestone content in rocks. The redness of the soil is due to the presence of iron oxide.

Lappies: When the joints of limestone rocks are corrugated by groundwater, long furrows are formed and these are called LAPPIES.

Sinkhole: A funnel shaped depressions formed due to dissolution of limestone rock is called sinkholes. Their average depth ranges between three and nine meters.

Caves and Caverns: Caves and caverns are subterranean features of karst topography. Caves are hollows that are formed by the dissolution of limestone rocks when carbon di oxide in air turns into carbonic acid after its reaction with water. They vary in size and shape. Caverns are the caves with irregular floors, e.g., Guptadham caves in Western Bihar.
All types of deposits in the caves and caverns are collectively called speleothems which includes travertines, tufa, dripstones.
Swallow Holes, Uvalas, Dolines, Poljis are other erossional Features of karst regions predominant in other parts of the world.

Question 3.
What is a glacier? Explain its types.
Answer:
A Glacier is a large mass of ice that moves slowly over the land, from its place of accumulation. It is also known as ‘River of ice’. The place of accumulation is called snowfield. The height above which there is a permanent snow cover in the higher altitude or latitude is called snowline. Higher the latitude, lower the snowline from sea level.

The gradual transformation of snow into granular ice is called ‘firn’ or ‘ neve’ and finally it becomes solid glacial ice.
Movement of Glacier: The large mass of ice creates pressure at its bottom and generates heat. Due to this, the glacier melts a little and starts to move The rate of movement of a glacier varies from a few centimetres to several hundred meters a day. The movement of glaciers depends on slope, volume of the glacier, thickness, roughness at the bottom (friction) etc., and Temperature. Like the rivers, glaciers also carry out erosion, transportation and deposition.

Types of Glacier: Glaciers are broadly divided into two types based on the place of occurrence, such as Continental glacier and valley glacier.

Question 4.
Describe the depositional work of winds.
Deposition occurs when the speed of wind is reduced by the presence of obstacles like bushes, forests and rock structures. The sediments carried by wind get deposited on both the wind ward and leeward sides of these obstacles.
Some of the depositional landforms are sand dunes, barchans and loess.

Sand Dune: In deserts, during sandstorms, wind carries loads of sand. When the speed of wind decreases, huge amount of sand gets deposited. These mounds or hills of sand are called sand dunes. There are different types of sand dunes.

Barchan: Barchans are isolated, crescent shaped sand dunes. They have gentle slopes on the windward side and steep slopes on the leeward side.
Transverse Dunes: Transverse dunes are asymmetrical in shape. They are formed by alternate slow and fast winds that blow from the same direction.

Longitudinal Dunes: Longitudinal dunes are long narrow ridges of sand, which extend in a direction parallel to the prevailing winds. These dunes are called Seifs in Sahara.

Loess: The term loess refers to the deposits of fine silt and porous sand over a vast region. Extensive loess deposits are found in Northern and Western China, the Pampas of Argentina, in Ukraine and in the Mississippi Valley of the United States.

VII. Consider the given statements and choose the right option given below.

Question 2.
Underground water is more common in limestone areas than surface run off. Why?
Answer:
The chief constituent of limestone is calcium carbonate which is soluble in pure water and easily soluble in carbonate water.

Question 3.
The river channels in the lower course are wider than the upper course.
Answer:
The reasons are,

Question 1.
Is weathering a pre-requisite in the formation of soil?
Answer:

Question 2.
Snowline of Alps’is 2700 metre where as the snowline of Greenland is just 600 mts. Find out the reason.
Answer:
On tropical mountains the snowline may be as high as 500 mts, but when traced poleward it descends to 2700 mts in the European Alps to 600 meters in Greenland and just to se-a level near the poles. –

Question 1.
On the given outline map of the world, mark the following.
1. Any two deltas
2. A Karst region
3. Any two hot and cold deserts
Answer:
1. Any two deltas – Euphrates & Tigris Delta and Amazon river Delta 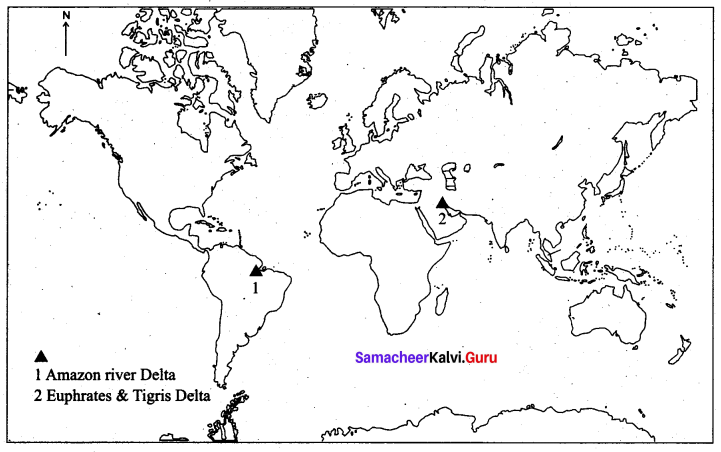 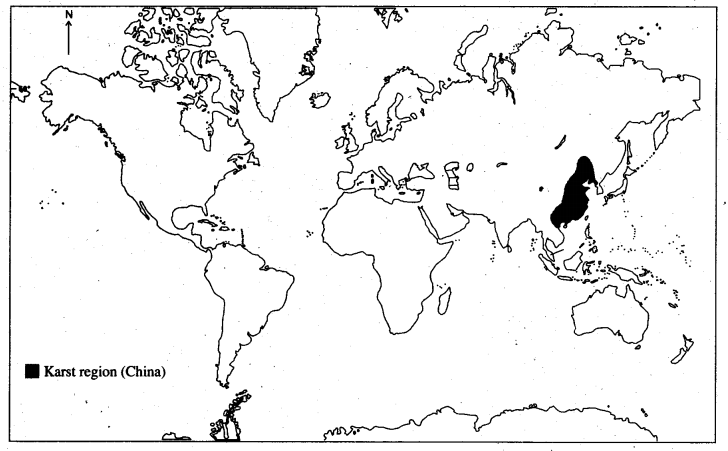 3. Any two hot and cold desets 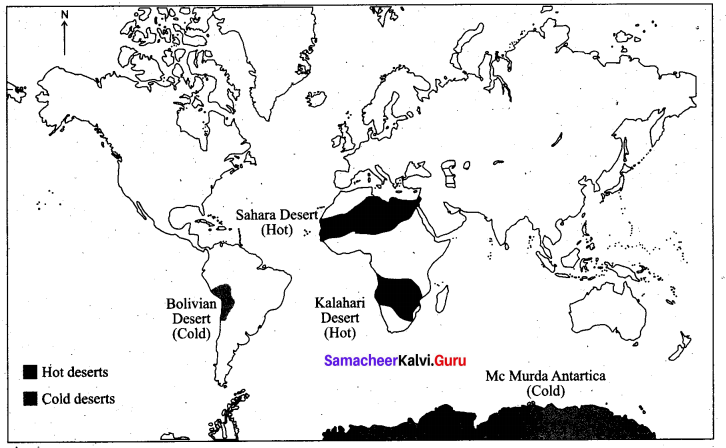 Question 1.
The process of dissolution of rock substances in water is …………….
(a) oxidation
(b) solution
(c) gradation
(d) hydration
Answer:
(b) solution

Question 1.
Define Granular Disintegration.
Answer:
Granular disintegration takes place in crystalline rocks where the grains of the rocks become loose and fall out. This is due to the action of temperature & frost.

Question 3.
What are “Pot Holes”?
Answer:
Due to the river action, cylindrical holes are drilled vertically in the river bed with varying depth and diametre.

Question 5.
What are Transverse Dunes?
Answer:

Question 6.
What are wave cut Platforms?
Answer:
Flat surface found at the foot of the sea cliffs are called as wave Cut platform. It is also referred as Beach, shelf, terrace and plain.

VI. Answer in a Paragraph.

Question 1.
Explain the origin of the river and its course.
Answer:
Rivers generally originate from mountains and end in a sea or lake. The whole path that a river flows through is called its course. The course of a river is divided into:
(i) The upper course
(ii) The middle course and
(iii) The lower course
(i) The Upper Course: Erosion is the most dominant action of river in the upper course. In this course, a river usually tumbles down the steep mountain slopes. The steep gradient increases the velocity and the river channel performs erosion with great force to widen and deepen its valley. The land features carved by a river in its upper course are V-shaped valleys, gorges, canyons, rapids, pot holes, spurs, and waterfalls.

(ii) The Middle Course: The river enters the plain in its middle course. The volume of water increases with the confluence of many tributaries and thus increases the load of the river. Thus, the predominant action of a river is transportation. The deposition also occurs due to the sudden decrease in velocity. The river in the middle course develops some typical landforms like alluvial fans, flood plains, meanders, ox-bow lakes etc.,

(iii) The Lower course: The river, moving downstream across a broad, level plain is loaded with debris, brought down from its upper and middle courses. Large deposits of sediments are found at the level bed and the river, splits into a number of channels called distributaries. The main work of the river here is deposition and it develops typical landforms like delta and estuary.

VII. Consider the given statements and choose the right option given below.

Question 1.
(i) The nature and magnitude of weathering differs from place to place and region to region.
(ii) Granular disintegration takes place due to the action of volcanoes.
(iii) Weathering is a pre-requisite in the formation of soil.
Which of the above statement is/are the right statement.
(a) (i), (ii) and (iii) are right
(b) (i) & (ii) are right
(c) (i) & (iii) are right
(d) only (i) is right.
Answer:
(c) is right 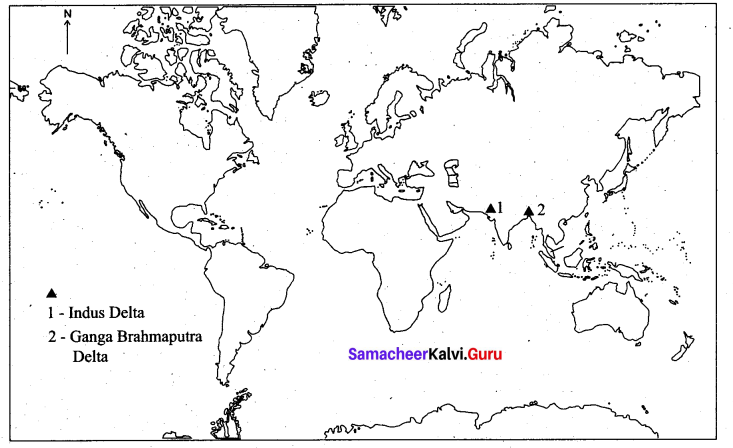 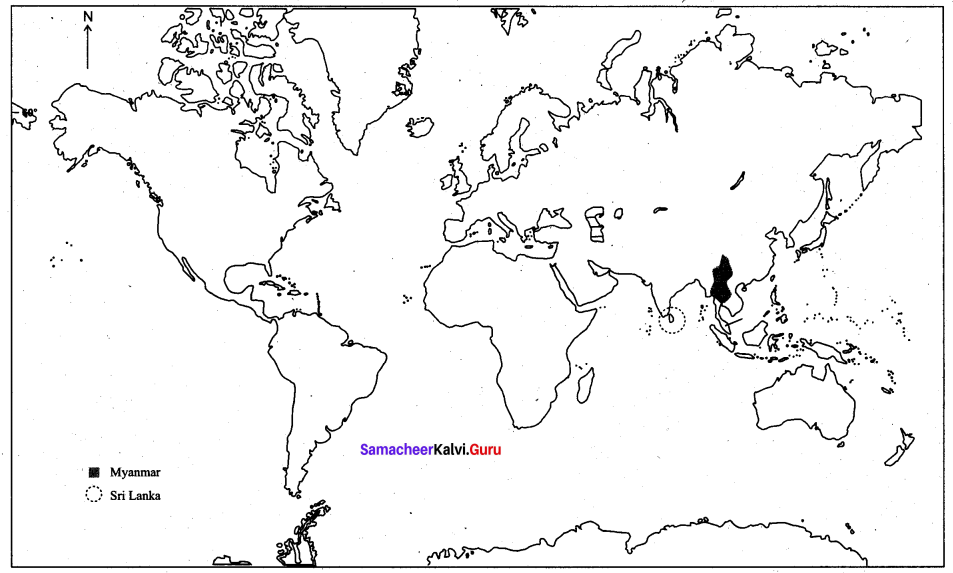