II. State whether the following statements are true or false. If false give the correct statement.

(e) Made up of atomsAnswer:

Answer:
Absorption Adsorption
It is the process by which atoms, molecules, or ions enter a bulk phase (liquid, gas, solid) It is the adhesion of atoms, ions or molecules from a gas, liquid or dissolved solid to a surface

Matter Around Us Book Back Answers Question 2.
Define sublimation.
Answer:
Certain solids change directly to a gas without passing through the liquid is called sublimation.

9th Class Matter Around Us Lesson Question 4.
Name the apparatus that you will use of separate the components of mixtures containing two,

Matter Around Us 9th Class Question 5.
Name the components in each of the following mixtures.

Chapter 10 Matter Around Us Question 2.
Oxygen is very essential for us to live. It forms 21% of air by volume. Is it an element or compound?
Answer:
Oxygen is an element. It contains the atoms of oxygen of the same kind.

The mixture of naphthalene and saw dust are put in a china dish and covered with a perforated asbestos sheet. An inverted funnel is placed over the asbestos sheet.

The open end of the stem of the funnel is closed, using cotton wool. The china dish is heated. The pure vapours of naphthalene solid pass through the holes in the asbestos sheet and condense on the inner side of the funnel. The saw dust is left in the china dish.

Matter Around Us Class 9 Question 5.
How are homogenous solutions different from heterogeneous solution? Explain with examples.
Answer:

Question 1.
Write the differences between elements and compounds and give an example for each.
Answer: 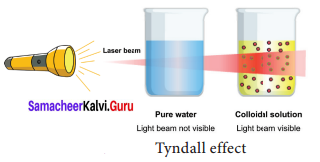 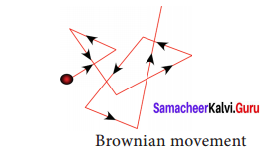 It is a kinetic property. When colloidal solution are viewed under powerful microscope, it can be seen that colloidal particles are moving constantly and rapidly in zig-zag directions. The Brownian movement of particles is due to the unbalanced bombardment of the particles by the molecules of dispersion medium.

The salt water is heated slowly, in a distillation flask with a water condenser. The pure water vapour passes through the inner tube of the condenser.

The vapours on cooling condense into pure water and are collected in a receiver. The salt is left behind in the flask as a residue.

Question 1.
Make models of the molecules of compounds by using match sticks and clay balls as shown below,

Question 2.
Take some powdered iron filings and mix it with sulphur.

Answer:
Iron + Sulphur \(\stackrel{\Delta}{\longrightarrow}\) Iron sulphide
We cannot separate iron from iron sulphide. So, it is a compound, whereas Iron and Sulphur are mixtures. We can separate it by magnetic separation method.

Question 3.
Identify whether the given substance is mixture or compound and justify your answer.

III. State which the following statements are true or false. If false give the correct statement.

Question 1.
What is a matter?
Answer:
Anything which has mass and occupies space (volume) is called matter.

Question 3.
What are the uses of dry ice?
Answer:

Question 6.
What does the LPG (Liquefied petroleum gas) contain?
Answer:
LPG is a highly inflammable hydrocarbon. It contains a mixture of butane and propane gases.

Question 8.
What are impure substances? Give examples.
Answer:
Impure substances contain more than one kind of particles.
Eg: Mixtures (Gun powder, which is a mixture of sulphur potassium nitrate and charcoal)

Question 9.
Classify the pure substance on the basis of chemical composition.
Answer:

Question 11.
Write a few examples for the following colloids.
Answer:

Question 12.
Name the two phases in separation of the mixtures in chromatography.
Answer:

Question 13.
What is absorption? Give example.
Answer:
Absorption is the process in which the substance is dissolved throughout the bulk of another substance.
Eg: Paper soaks up or absorbs water.

Question 14.
What is adsorption? Give example.
Answer:
Adsorption is the process in which particles of a substances, adhere to a surface of another substance.
Eg: Charcoal adsorbs gases on its surface.

V. Answer the following in detail.

Question 1.
Explain the factors, which will affect the rate of evaporation, taking examples from our daily life experiences.
Answer:

Question 4.
Write the methods of separation for the following:
Answer:

Question 5.
Write the differences between mixture and compounds.
Answer: