You can Download Samacheer Kalvi 7th Social Science Book Solutions Guide Pdf, Tamilnadu State Board help you to revise the complete Syllabus and score more marks in your examinations.

Samacheer Kalvi Guru 7th Social Question 3.
The word State government refers to
(a) Government departments in the states
(b) Legislative Assembly
(c) both a and b
(d) none of the above
Answer:
(c) both a and b

Samacheer Kalvi 7th Social Question 1.
Which of the following statement is/are not correct?
To become a governor, one
a. should be the citizen of India
b. should have completed 25 years of age
c. should have sound mind
d. should not hold any office of profit.
i. a & b
ii. c & d
iii. a
iv. b
Answer:
iv. b

Samacheer Kalvi 7th Social Solutions Question 2.
Consider the following statements and state true or false.
a. MLAs are together responsible for the working of the government
b. All the MLAs of other political party who do not belong to the ruling party are called opposition.
e. MLAs are not the representatives of people.
Answers:
a. True
b. True
c. False

V. Answer in one or two sentences

Samacheer Kalvi 7th Standard Social Question 1.
What are the qualifications to become the Governor of a state?
Answer:
A person to be eligible to the post of Governor should be :

Samacheer Kalvi 7 Social Question 3.
Write a note on Lok Adalat.
Answer:
Lok Adalat (people’s court) also have been established by the Government of India to settle dispute through conciliation and compromise. Lok adalats have been given statutory status under the Legal Service Authorities Act, 1987.

Samacheer Kalvi 7th Social Books Question 4.
What is a constituency?
Answer:
Political parties nominate their candidates to each constituency. All the people residing in that constituency who has completed 18 years of age cast their vote.

VI. Answer the following in detail

Question 2.
Who is an MLA?
Answer:

Question 3.
What is the role of Chief Minister and other Council of Ministers at the state level?
Answer:

Question 1.
Name some departments of the government
Answer: 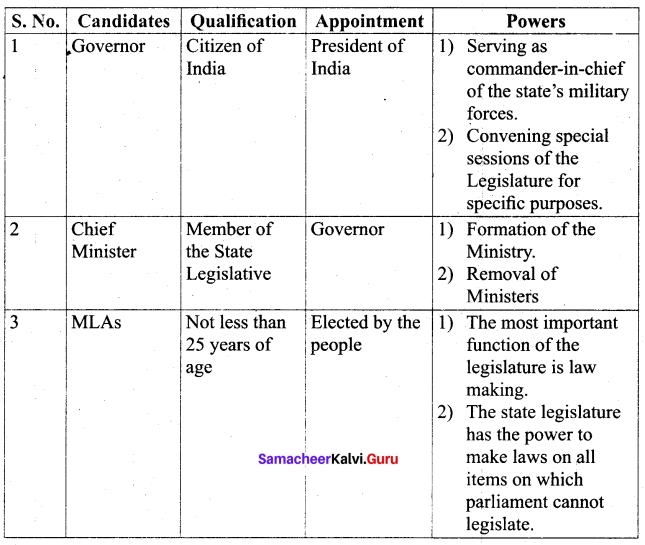 Question 1.
Make a list of the name of the Governor, Chief Minister and other Ministers with their departments.
Answer:
Activity to be done by the students themselves

Question 2.
Write an essay on ‘If you were the Chief Minister of the state’.
Answer:
First of all, I shall try my level best to make my country a strong and self respecting nation. India will be a great power and no other country will dare attack India.

The second thing I will do will be the fullest and genuine attention to the poorest and the lowliest. I shall endeavour to give full employment to at least one member of each house-hold. It will be my attempt to keep the prices under control. I shall try to stream-line the public distribution system further and supply the essential commodities to the poor at subsidized rates. I shall try to make the taxation system more useful and rational. Whereas the rich may be taxed heavily, the poor and the middle classes will be spared.

The third thing, to which I shall devote my energy, is the education system. I shall raise its standard and make it based on merit and for all. The examination system will be over-hauled, so that there is no copying and the real merit of a student is readily discernible. Much more attention will be given to admission to professional colleges on the basis of merit. There will be reservation only on economic grounds and not on caste basis.

The fourth thing deserving my fullest attention will be the population control. Without it, our country will be ruined. Then I shall also take care of important and productive fields like agriculture, industry, oil production, mining, increase in exports etc. Above all, I shall try to raise the moral standard of the people and make them more patriotic. I shall also try to root out evils of terrorism, communalism, provincialism, drug-taking, dowry system, drinking etc.

Question 3.
Make a student Legislative body in your class, (allocate the departments and do periodical review).
Answer:
Activity to be done by the students themselves

Question 2.
How many states and union territories are there in India?
Answer:
29 States and 7 uni&n terriories are in India.

Question 3.
What is Central Government?
Answer:
India is a Parliamentary democratic republic where the President of India is the Head of Indian Union and the Prime Minister and all the Ministers are responsible for smooth running of the government. This is called central government.

Question 4.
Who are all included in the State Government?
Answer:
The Governor, the Chief Minister, Council of Ministers.

VI. Answer the following in detail

Question 1.
What is High Courts? and it briefly explain.
Answer: