Semantic Map
A. Read the list of words. Write down all the words related to those words. Create a “map” using a graphic organiser and discuss it in groups. One is done for you.

B. Look at the list of words. Read the instructions and make Vocabulary Frames.notice hide quarrelling quickly
(notice,hide,quarrelling,quickly,tired,wide,pretty,threw) 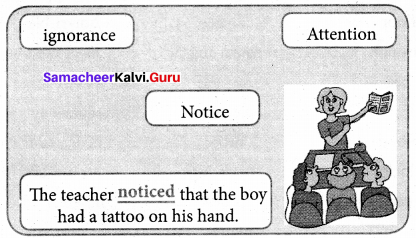 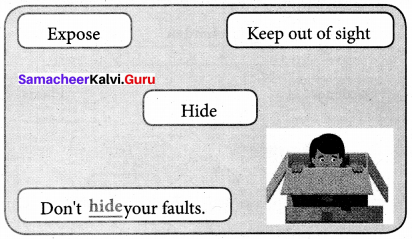 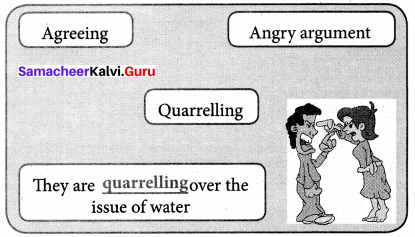 Three Samples are given and others to be done by the Students.

C. Fill in the table with monosyllabic, disyllabic and trisyllabic words from the play ‘Jane Eyre’.
Answer: 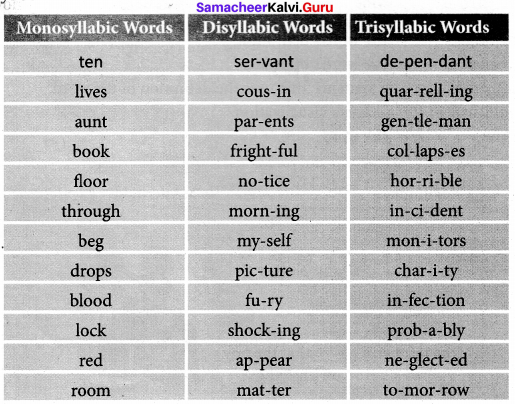 D. Listen to the conversation between a father and daughter and say whether following statements are true or false.

E. Imagine that below are some of the paintings of Jane Eyre. Discuss with your partner and describe the paintings.
Answer: 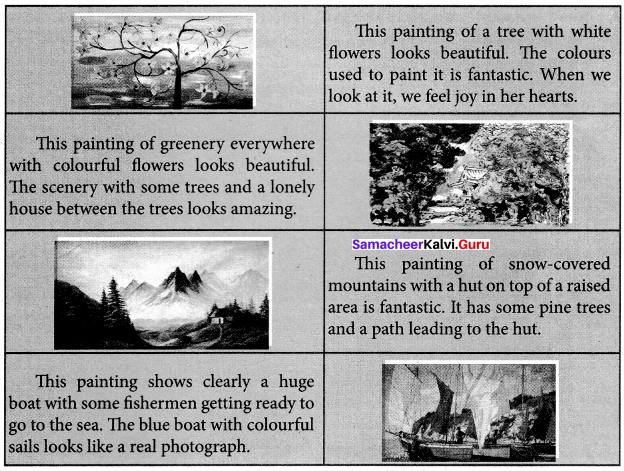 F. Put students into groups of three and let them act as Jane.

Student 1 : I am Jane. As my parents died, I had to live with my uncle and aunt Mr. and Mrs. Reed in a town called Gateshead. My three cousins Eliza, John and Georgiana ill-treated me. After my uncle’s death, my aunt did not look after me as her daughter. She always locked me up in a red room. Besides, the maid had to listen to my aunt and did, as was told by her. My aunt wrote a letter to Mr. Brocklehurst and sent me to Lowood.

Student 2 : At Lowood, I met Miss. Muller and Miss. Temple. They put me in the fourth form. There, I got a new companion Helen Burns, who told me that their school was a charity school for the orphans. But after some time, Helen got ill and passed away leaving me alone in Lowood. I spent eight years in school – six years as a student and two years as a teacher. I wanted liberty. So I advertised in Herald for situations. A week later, I received a letter from Mrs. Fairfax, Thornfield, for a job.

Student 3 : There, at Thornfield, I was asked to teach Miss. Adela. She was Mr. Rochester’s ward. I liked Thornfield very much. I told Adela that I would teach her about nature, animals and flowers. We can study all we can that isn’t in books. I believe that art is the window of the soul. So I started teaching Adela and led a new life in Thornfield.

G. Read the story and fill in the grid by ticking each character’s qualities.
Discuss in pairs to rate the characteristic and give marks from 1 to 10 depending on the grade of each quality.
Justify your views in one or two sentences.
Answer: 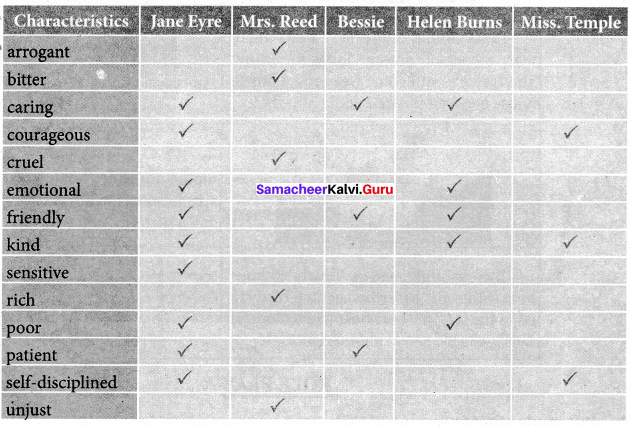 H. Arrange the jumbled sentences and write a paragraph. Use appropriate conjunctions.

Answer:
1, 2,4, 3, 5, 6, 7, 8, 9
Jane Eyre is an orphan. So she lives with her aunt and uncle Mr. and Mrs. Reed. Jane’s uncle Mr. Reed likes Jane, but he dies. Mrs. Reed does not like Jane because Jane is not her daughter. Before his death, Uncle Reed makes his wife promise to take care of Jane, but instead she sends her away. As Jane is only ten years old, she is sent to Lowood school. As, Jane gets graduated herself, she stays there to teach. From there, she leaves for Thornfield, where she becomes a governess. She is very happy there.

I. Read scene I. Discuss with your partner what Mrs Reed might write about Jane in her letter to the owner of a school. Now complete her letter to Mr. Brocklehurst.
Answer:
Gateshead Hall, Gateshead
Northumberland
Mr Brocklehurst Lowood Institution Lowood Durham
Dear Sir,
I understand that you have a school for the orphans. My niece, Miss. Jane Eyre, who is ten years old, is an orphan. She lost her parents. I am finding it difficult to bring her up here. So I request you to admit her in your charity institution. If you permit to take her, I will send her to Lowood.
Thank you.
Yours sincerely,
Mrs. Reed.

J. Read the passage. Choose between a little, a lot of, a few, few, fewer, many and much to fill in the gap.

DON’T CALL US, WE’LL CALL YOU!
Answer:
Two years ago, I moved to a new neighbourhood. There seemed to be very few people in this area without telephones, so I expected to get a new phone quickly. I applied forone as soon as I moved into my new house. ‘We aren’t supplying a lot of new phones in your area’, an engineer told me. ‘A few people want new phones at the moment and the company is employing fewer engineers than last year so as to save money. A new phone won’t cost you much money, but it will take a little time. We can’t do anything for you before December. ‘You need a lot of patience if you’re waiting for a new phone and you need many friends whose phones you can use as well. Fortunately, I had both. December came and went, but there was no sign of a phone. I went to the company’s local office to protest. ‘They told me I’d have a phone by December,’ I protested. ‘Which year?’ the assistant asked.

L. Read the following passage and fill in the blanks with the correct form of the verb.
Where had I gone? What had I done?
What had I seen?
Answer:
I had never seen (see) such beautiful sights before I visited Paris in 2012. I had saved (save) money for five years before I booked my trip to Paris. I was very excited! Before my trip to Paris, I had never been (be) out of India.
When I went to Paris, I spent many days touring the city. The city was big. Sometimes I got lost and asked for directions. I asked for directions in French. That was easy because I had studied (study) French for two years before I visited Paris.
By the time I left Paris, I had toured (tour) many beautiful places. The Eiffel Tower, the Notre Dame Cathedral, and the Luxembourg Gardens were just a few of the places I saw. Before I visited Paris, I had only seen (see) those places on television.

M. Look at the picture and write eight sentences using prepositions.
Where is the rabbit
Answer:

N. Answer the questions below. Write your answers in the second column of the table.

a. How old are you?
b. How tall are you?
c. What bicycle do you have?
d. How many languages do you speak?
e. At what time do you usually wake up?
f. How far is your home from school?
Answer:

O. Work in groups of six. Write the other students’ names at the top of the fable. Interview each student using the above questions and complete the table with their answers.
When you have all the answers, use the results to write three comparative and three superlative sentences about the students in your group.
Examples: I am the oldest in my group.
My bicycle is more colourful than Jane’s bicycle. m
Answer:

P. Read the followingarticleabout theamazingsimif arities be tween the assassination of John F. Kennedy and Abraham Lincoln; then underline the passive forms.
Answer:

Question 2.
John ordered Jane to come there when he called her.
Answer:
“Come here when 1 call you.”

Question 3.
Eliza asked Jane what she was doing then.
Answer:
“What are you reading now?”

Question 6.
Miss. Miller asked Miss. Temple where she should put Jane.
Answer:
“Where shall I put her Miss. Temple?”

Question 7.
Jane asked Helen why they called it an institution.
Answer:
“And why do they call it institution?”

Question 8.
Helen asked Jane why she had come there.
Answer:
“Why have you come here, Jane?”

Connecting To Self
R. Case Study.

Answer:
Activity to be done by the Students. 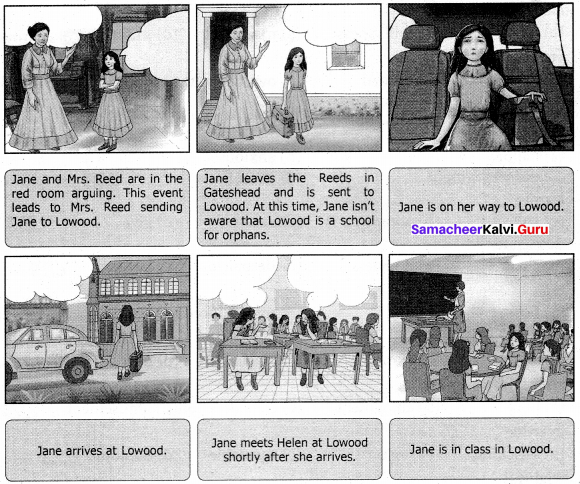 ”
Answer:
Activity to be done by the Students

I. Choose the correct Synonyms from the options below.

II. Choose the correct Antonyms from the options below.

Question 1.
How Old was Jane when she came to her aunt’s house?
Answer:
She was ten years Old.

Question 2.
Who were her cousins?
Answer:
Her cousins were Eliza, John and Georgiana.

Question 4.
What did Bessie tell Jane?
Answer:
Bessie told Jane not to quarrel with Miss. Georgina and Eliza. If she does, the whole house would be in uproar.

Question 6.
What did John do to her?
Answer:
John threw the book at her. He grasped her hair and shoulder and hit her with something.

Question 7.
What does Mrs. Reed tell Bessie to do with Jane?
Answer:
Mrs. Reed ordered Bessie to take Jane to the red room and lock her up.

Question 9.
Where was Jane sent by Mrs. Reed?
Answer:
Jane was sent to Lowood institution by Mrs. Reed.

Question 10.
How were the girls in the school dressed?
Answer:
girls were uniformly dressed.

Question 1.
Why was Jane ill at Mrs. Reed’s house?
Answer:
When Jane was locked in the red room, she started crying and screamed loudly to let her out. She also heard some noise and saw someone. So she felt ill.

Question 4.
What happened at Lowood School, when the spring started?
Answer:
When spring started, semi-starvation and neglected colds had put most of the students at the risk of getting infection. Forty-five out of the eighty girls lay ill at one time.

Question 5.
How many years did Jane spend in Lowood School?
Answer:
Jane spent eight years in the Lowood School. She was there as a student for six years and worked as a teacher for two years.

Question 1.
Narrate the incident at Thornfield.
Answer:
Jane received a letter from Mrs. Fairfax at Thornfield to teach Adela. Jane went to if Thornfield and met Mrs. Fairfax. She gave her a warm welcome. Next morning, Miss. Adela came running to Jane followed by her attendant Miss. Varens. Jane told her that she would teach her to learn about nature, animals and the flowers. They would study all they can that isn’t in the books. They would also learn to paint and draw. She started teaching Adela and led a new life at Thornfield.

Every child has a right to an education, a life free from poverty and protection from abuse. Look at the picture 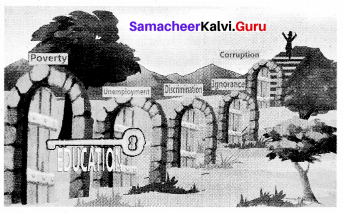 Discuss in pairs and answer.

Question 1.
What are the basic human rights?
Answer:

Question 2.
What is education?
Answer:
Education is the process of getting knowledge, skills, values, beliefs and habits.

Question 3.
Why do lye jxeed education?
Answer:
Education gives us a knowledge of the world around us and changes it into something better. It helps us build opinions and have points of view on things in life.

Jane Eyre was a ten years old girl. Her parents were deaid. So she lived with her aunt Mrs. Reed and her three cousins – Eliza, John and Georgiana. Mrs. Reed’s house was in a town called Gateshead, in England. Jane’s uncle Mr. Reed liked her. But he was no more. He died. Mrs. Reed did not like Jane because she was not her daughter. Her three cousins always ill-treated her and Mrs. Reed locked her up in the red room. After this incident, Mrs. Reed wrote a letter to Mr. Brocklehurst who is running a school at Lowood. Jane is sent to Lowood. There Jane was put in form four with other girls. It was a charity school which was run for the orphans. Semi-starvation and neglected colds had given way to infection. Forty-five students out of eighty girls lay ill at one time. Helen, Jane’s friend, also fell ill and died. Jane spent eight years in the school, six years as a student and two years as a teacher. She got a job as a teacher at Thornfield. There she started teaching Adela and led a new life in Thornfield.

Discuss in pairs and answer.

Question 1.
Why does Jane want to go to school or learn anything in the first place?
Answer:
Jane wants to learn life’s lessons that shape her character as an adult.