A. Choose the correct answer

Samacheer Kalvi Guru 6th Social Question 5.
A narrow strip of water that connects two large water bodies
(a) A Strait
(b) An Isthmus
(c) An Island
(d) A Trench
Answer:
(a) A Strait 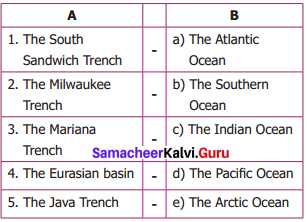 I. Consider the following statements.

F. Answer in a word

Samacheerkalvi.Guru 6th Social Question 1.
Which is the highest plateau in the world?
Answer:
Tibetan Plateau

Samacheer Kalvi Social 6th Standard Question 5.
What is the deepest part of the ocean called as?
Answer:
Trench

Samacheer Kalvi 6th Geography Book Question 1.
What is a continent?
Answer:
The vast landmasses on Earth are called Continents.

Samacheer Kalvi 6 Social Science Question 4.
List out the names of continents according to their size
Answer:

I. Answer the following questions in detail.

(ii) Asia is the largest continent, whereas Australia is the smallest one.

Second order and forms:
The second order  and forms are categorised as mountains, plateaus and plains.

Question 4.
Give the important features of the Pacific Ocean.
Answer:

Question 5.
Write down the importance of oceans.
Answer: 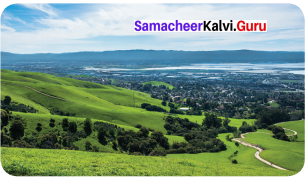 Question 1.
Give examples for the following using an Atlas.

Question 2.
Map reading (with the help of atlas)

a. A sea in the east of India
b. Continents in the westof Atlantic Ocean
c. Continents in the south of Arctic Ocean
d. A strait betweenlndia and Sri Lanka
e. Oceans which surround Australia if.
f. Find out thedsthumusses
(Create more questions)
Answer:
a. Bay of Bengal
b. North America and South America
c. Almost completely surrounded by Eurasia and North America.
d. Palk Strait.
e. Indian Ocean to the west, the South Pacific Ocean to the East and the Southern Ocean to the South.
f. Isthumusses – A Narrow piece of land connecting two larger areas across an expanse of water. Isthumus of Panama – Central America.

Question 3.
On the given outline map of the world, label the continents and mountain ranges.
Answer: 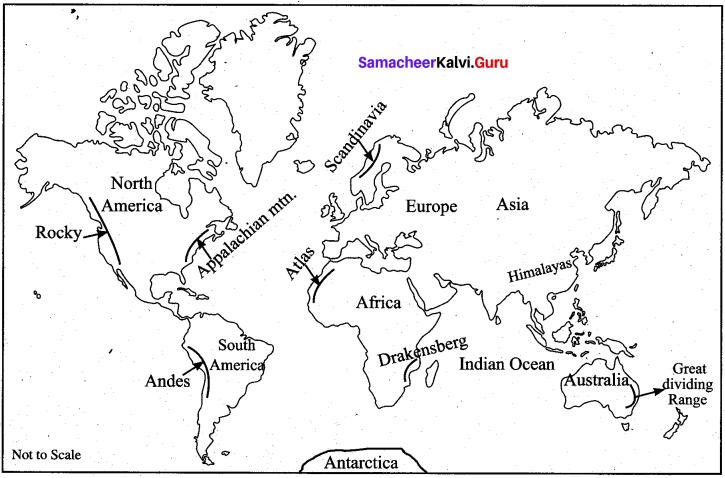 Question 4.
On the given outline map of the world, label oceans, seas, isthumus and straits.
Answer: 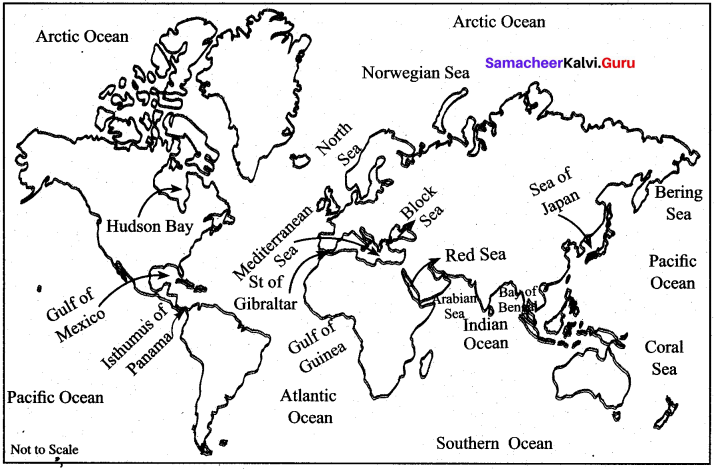 Question 3.
When you are walking on the Marina beach in Chennai, which order of landform are you on?
Answer:
Third order of land form.

Question 4.
Why are the Red Sea, Dead Sea and Black Sea named so?
Answer:

(i) Red Sea – It is named Red sea because it contains a Cyanobacteria which turns the normally blue – green water a reddish one. It gets connected to the ocean without even one river meeting the sea.

(ii) Black Sea – The Black Sea was first named by the ancient greeks as in hospitable sea. The sea got this reputation because it was different to navigate and hostile tribes inhabited its shores. After the successful development of the coast by the Greek colonists, the sea was named hospitable sea.

(iii) Dead Sea – The Dead Sea is roughly 8.6 times saltier than the ocean. This salinity makes for a harsh environment in which animals cannot flourish.

Question 5.
When you travel from Japan to California, which ocean would you travel across?
Answer:
Pacific Ocean.

Question 6.
When you arrange the continents in ascending order according to their size, which ranks third?
Answer:
Antarctica.

Question 1.
Complete the given table with the help of an atlas. Follow the example

A. Choose the correct answer

Question 3.
The longest mountain range in the world is
(a) Himalayas
(b) Rocky
(c) Andes
(d) Alps
Answer:
(c) Andes

Question 4.
Which of the following is not grouped under second-order landform?
(a) Plains
(b) Plateaus
(c) Valleys
(d) Mountains
Answer:
(c) Valleys

Question 6.
Bering sea is the marginal sea of the Ocean.
(a) Pacific
(b) Indian
(c) Atlantic
(d) Arctic
Answer:
(a) Pacific

F. Answer in a word

Question 1.
A broad inlet of the sea where the land curves inwards.
Answer:
Bay

Question 3.
The Plains of river Cauvery and Vaigai are found in the State of
Answer:
Tamil nadu

Question 4.
The eroded materials getting deposited on the low lying areas.
Answer:
Deposition

Question 5.
The Strait which connects the Atlantic ocean-to the Mediterranean Sea
Answer:
Strait of Gibraltar

Question 2.
Mention some of the hill stations in Tamil Nadu.
Answer:

Question 1.
A continent and ocean
Answer:

Question 2.
An Pacific Ocean and a Atlantic Ocean Ans
Answer:

I. Answer the following questions in detail.

Question 1.
Write a note on the Third order of landforms.

Question 2.
Bring out the features of the Indian Ocean.
Answer: