IV. Fill in the blanks:

Question 1.
What do the colours in our National Flag represent?
Answer:

Question 2.
What are the parts of our National emblem?
Answer:

Question 3.
What are the salient features of the National anthem?
Answer:

The rules to be observed while singing the Anthem

Question 5.
Where do we use our National emblem?
Answer:
The National emblem is found at the top of the Government Communication, Indian Currency and passport.

Question 8.
What are the natural national Symbols?
Answer:

Question 1.
What should we do to protect the endangered plants and animals – Discuss.
Answer:

Question 2.
Celebrate the national eyents in your school and prepare a news item for a local
newspaper.
Answer:
Republic Day Celebrations in our XYZ Hr. Sec. School
A Report
On the morning of 26th Jan, our school, XYZ Hr. Sec. School, celebrated Republic Day in the school premises. It was a matter of great pride for all of us. Our Headmaster, teachers and the students didn’t want to leave any stone unturned in making this monumental day a memorable one.

The DIG of the City Police was the Chief Guest. He came on time. He was warmly welcomed by the whole staff led by our Headmaster. Then our Headmaster took him to the Function venue. There our hon’ble guest unfurled the national flag. With that everybody stood erected for National Anthem sung by the students. Then there were parades by NCC cadets of the school. After this, students presented cultural items.

These cultural items included patriotic songs, folk dances and speeches. Some students also presented skit based on fight against terrorist. Then there were speakers who through their speeches invoked the precious contribution of great freedom fighters.

With a couple more cultural items, the function ended with national anthem. Towards the end, all the people there flew colored balloons symbolizing prosperity and peace. Despite weather being inclement, we enjoyed Republic Day with great enthusiasm. Along with other students, I will never forget this wonderful day.

Question 1.
Why are certain organisms adopted as natural National symbols? Analyse.
Answer:
Along with various animals and birds, which form part of the national symbols of India, the Indian government adopted a microorganism called lactobacillus delbrueckii in the year 2012 as our national microorganism.

The reason for doing so, is primarily educational and to create awareness among people about the importance of microorganisms. Lactobacillus is an important bacteria used in food production.

Lactobacillus species are used for the production of yogurt, cheese, sauerkraut, pickles, beer, wine, cider, kimchi, cocoa, and other fermented foods, as well as animal feeds, such as silage.

Question 1.
Who has been given the right to manufacture the National flag?
Answer:

I. Choose the Correct answer

Question 5.
The symbol Indian National Currency was designed by
(a) Ravikumar
(b) Udhyakumar
(c) Krishnakumar
(d) Manojkumar
Answer:
(b) Udhyakumar

Question 1.
Explain the ‘Beating retreat’ Ceremony.
Answer:
On January 29, the third day of the Republic day, the celebrations are brought to an end with the “ Beating Reteat” ceremony. This is performed by the bands of Indian Army, Navy and Airforce. The President of India is the chief guest of this day. Rashtrapati Bhavan will be illuminated at 6pm as a part of the celebration. 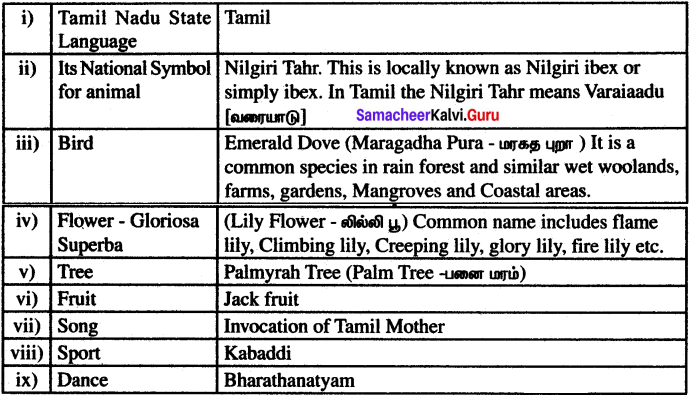